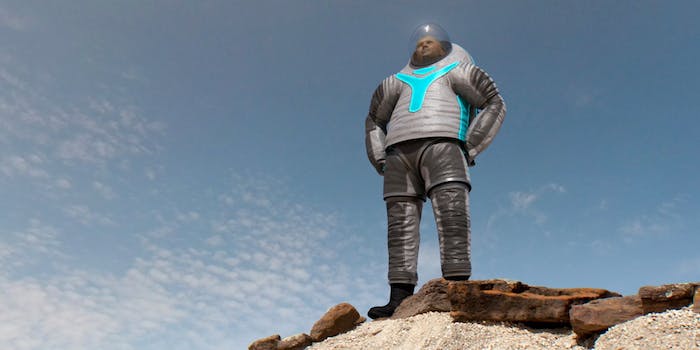 The Internet voted on NASA’s new spacesuit, and it went full ‘Tron’

NASA has chosen the spacesuit of the future. And it looks kind of like a cross between Buzz Lightyear and Tron.

Following a public vote from over 230,000 people, NASA has chosen the spacesuit of the future. And it looks kind of like a cross between Buzz Lightyear and one of the costumes from Tron.

The prototype Z-2 suit had already been designed, but the choice between various “cover layers” was left up to an online poll. The winning design, called “Technology,” which received over 60 percent of the overall vote, features a domed helmet and glowing, Tron-like design on the chest. The other two available designs were “Biomimicry” (inspired by “the world’s toughest creatures”) and “Trends in Society,” which was meant to reflect what everyday clothes might look like in the future.

As the new suit is still in its prototype phase, it won’t be making a trip into space for the foreseeable future. Instead, it will spend some time being tested here on Earth, to make sure it’s ready for use in a vacuum and at extreme temperatures.

The cool thing about the Z-2 spacesuit is that it’s part of NASA’s work to get human beings on Mars. The Z-series suits are being developed to be more and more appropriate for use in the Martian landscape, and this new prototype is just the latest step on the journey to exploring another planet in person.