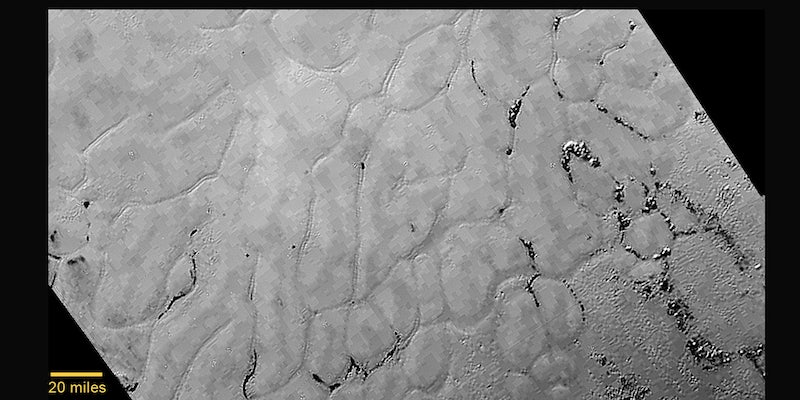 It’s been a big week for NASA as the New Horizons exploration probe, launched almost a decade ago, finally came within viewing distance of Pluto. The probe is the first spacecraft to take high-resolution images of the dwarf planet, allowing scientists to study its surface in detail for the first time.

NASA held a press conference on Friday where it released new images and videos that revealed tantalizing clues about Pluto’s geology and atmosphere.

Jim Green, director of Planetary Science at NASA Headquarters in Washington, said that the images were only the “tip of the iceberg.”

“Right now we’ve only received 1 to 2 percent of that data on the ground, by next week we’ll have as much as 5 or 6 percent,” Green said.

Some of the closest flyover images of Pluto’s instantly iconic heart-shaped feature were compiled into a video that features Pluto’s Norgay Montes mountains and the Sputnik Planum plain.

At the conference, NASA showed new images of Pluto’s heart—informally named the Tombaugh Regio after Pluto’s discoverer. Data reveals that Pluto’s heart is quite chilly, with a layer of carbon monoxide ice in its center. 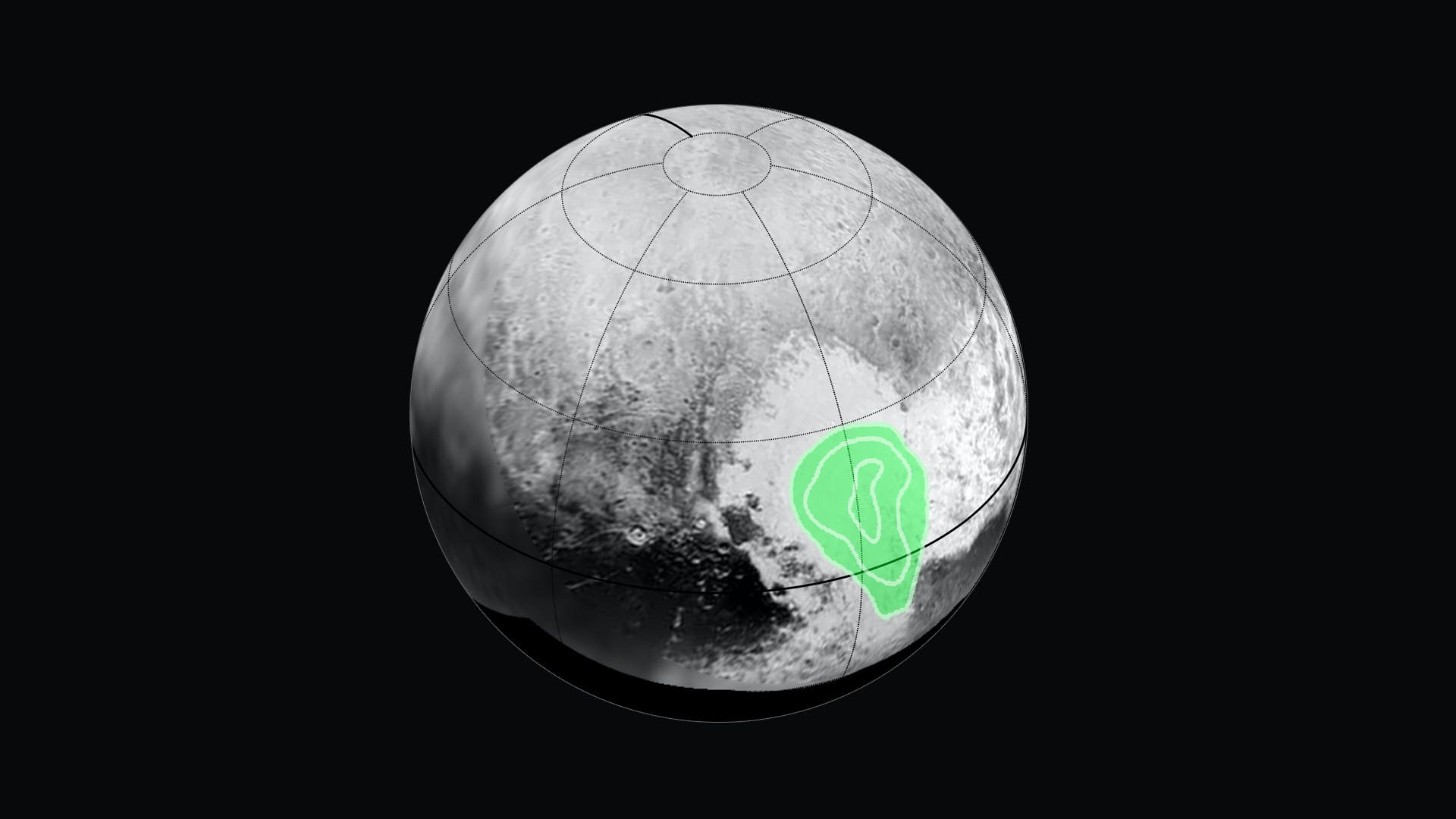 A closer look at new, higher-resolution images taken from 48,000 miles away from Pluto showed a craterless surface of the Sputnik Planum within the Tombaugh Regio. New Horizons co-investigator Jeffrey Moore said these surfaces could be no more than 100 million years old. The plain is segmented into polygons about 12 to 20 miles across outlined by troughs, Moore explained. He said that the troughs could have been formed by a shrinking of the surface material—like the cracks that form as mud dries. Alternatively, they could be formed as the “scant warmth” of Pluto’s interior drives convection in a layer of frozen carbon monoxide. 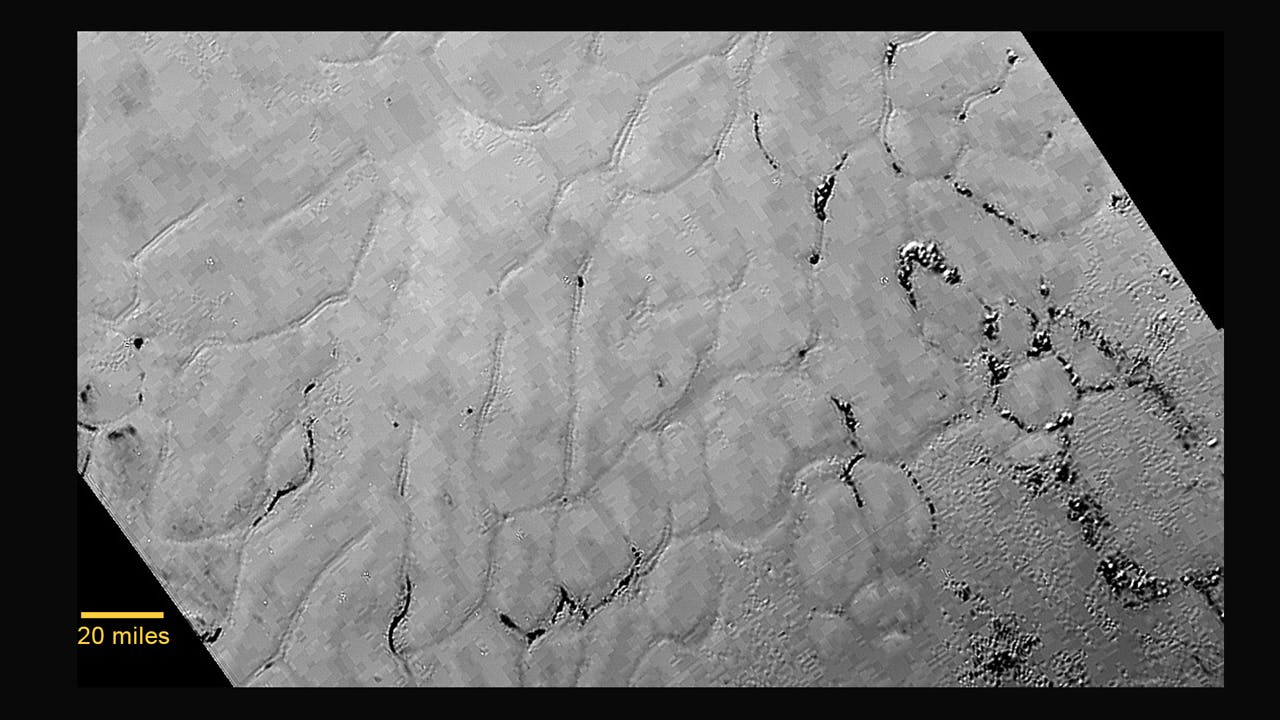 As more images of Pluto’s surface trickle in from the probe, researchers are stitching together an image of an icy planet that’s geologically active—with some areas ancient enough to be pockmarked with craters while other areas are smooth or hilly. Moore described the geology of the Sputnik Planum as “enigmatic,” and that researchers would develop a clearer story once more data comes in from New Horizons over the next couple of months.

As New Horizons passed Pluto, it was able to look back and take images of the dwarf planet passing in front of the sun, and from that researchers were able to glean some information about the nature of Pluto’s atmosphere. Signatures from Pluto’s sunset suggests that it has a “stagnant” or sluggish atmosphere, said Randy Gladstone, New Horizons co-investigator at Southwest Research Institute (SwRI) in San Antonio.

New data suggests that intense solar winds are tearing away ions from the atmosphere of Pluto, giving it a plasma tail similar to those observed on Mars and Venus. 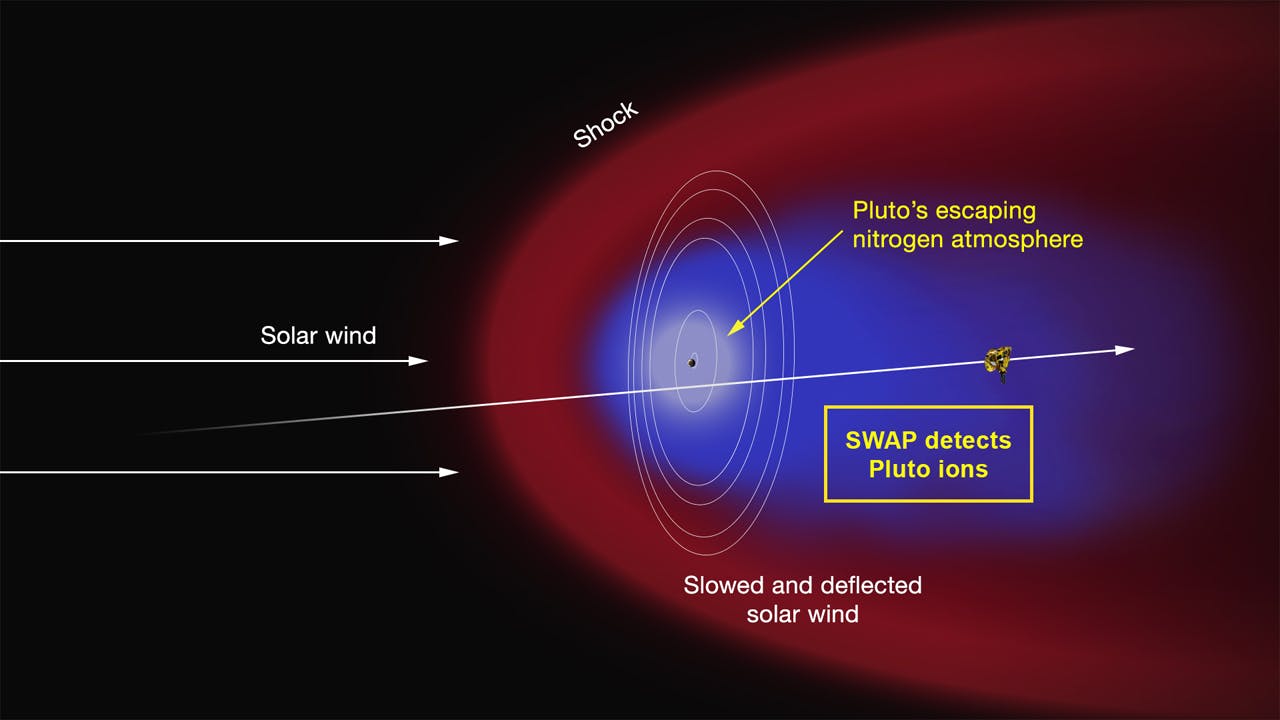 On track for the Kuiper belt

Alan Stern, New Horizons principal investigator at SwRI in Boulder, Colorado, said the probe is doing well and that the mission is continuing on as planned. The probe is now roughly 2 million miles away from Pluto as it heads toward the Kuiper belt, a completely unexplored belt of icy debris on the outer fringe of our solar system.

Following the short visit to Pluto, images from the probe have been trickling in rather slowly as the probe cannot take and send photos at the same time. It takes an estimated 4.5 hours for information to travel from the probe to stations on our home planet.

At its closest pass, New Horizons came within 7,800 miles of the dwarf planet but did not stop to orbit around the planet—doing so would have taken too much energy and prevented the probe from continuing deeper into the solar system.

These photos come on the heels of images released earlier this week of both the dwarf planet and its largest moon, Charon. As the probe neared Pluto, it was able to get images in sharper detail that revealed some of the Pluto’s geology—including the surprising news that Pluto’s surface is much younger than we originally thought. Instead of being marked with craters from millennia of collisions with passing debris (like our Moon), Pluto’s surface is mountainous and possibly geologically active.

The images collected from the New Horizons probe are the first high-definition photos humanity has ever taken of the distant former planet. NASA estimates it will take 16 months to download all the information from New Horizons, so soon mankind will be flush with images and information from the icy dwarf planet.

The panel also said they were humbled by the massive response the New Horizons mission received on social media this week. People from Reddit, Twitter, and Facebook—as well as other Internet personalities like xkcd artist, Randall Munroe—have been contributing Pluto memes to the conversation on the dwarf planet.

“I’m a little biased, but I think the solar system saved the best for last,” Stern said.