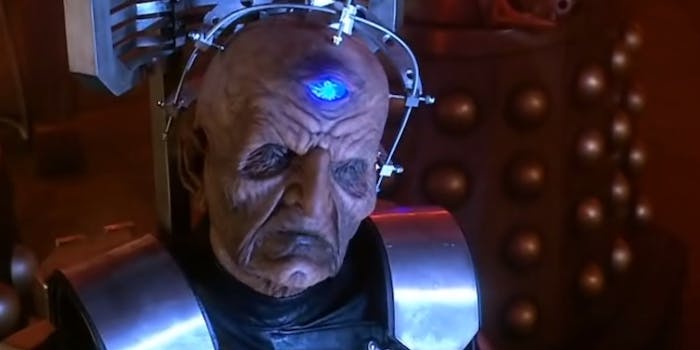 Is this a reference to one of the Doctor’s greatest enemies?

There’s a new teaser trailer for the eighth season of Doctor Who, and it looks like it may include a reference to one of the Doctor’s greatest enemies.

Thanks to the whole “teaser” aspect, we don’t have a whole lot to go on here. But this trailer at least has a little more dialogue than the first one, and many fans suspect that the Dalek-style voiceover is from none other than classic Doctor Who villain Davros.

Davros is the creator of the Daleks, the Doctor’s most iconic alien enemies. He’s been popping up in the show since the 1970s, and like most major characters in sci-fi television, is perfectly capable of being killed off and then coming back to life a few seasons later.

Was that Davros’ voice on the trailer or just a leader Dalek? #DoctorWho

Some fans aren’t so sure that it’s him, though. The Dalek voice makes things kind of tricky to parse, so a few people suspect that the voiceover is actually from Dalek Caan. He was a recurring character during the Russell T. Davies era of the show, and died back in season 4—although once again, that doesn’t necessarily mean anything.

@bbcdoctorwho was that Davros or Dalek Caan?

Guys i can’t decide whether the voice in the new teaser was Davros or Dalek Caan! What is happening?! I NEED S8! #DoctorWho

As for the creepy x-ray vision shot into the Doctor’s torso, that’s anyone’s guess. Is it significant? Are we meant to be gleaning something from this image of the Doctor’s two alien hearts? Or did the BBC just want a cool visual to go along with their cryptic Dalek voiceover?

The answer to all of these questions probably boils down to “Wait until the new season airs in August.” Meanwhile, Whovians will continue to stew with frustration thanks to the BBC’s torturous strategy of releasing this kind of 20-second teaser every few days.