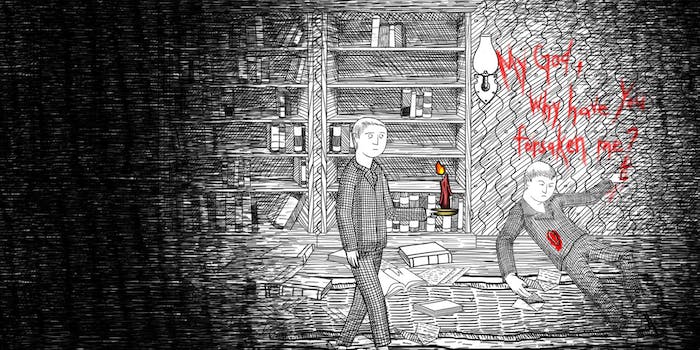 'Neverending Nightmares' illustrates the horror behind asthma, OCD, and schizophrenia.

Having a mental disorder can sometimes feel like an inescapable nightmare. To illustrate that point, game developer Matt Gilgenbach has created Neverending Nightmares, an exploration game Kickstarted late last year. The game has been on the radar of quite a few critics, boasting an amazing 2D scribbled art design inspired by Edward Gorey. It sets an eerie tone, but not in what you’d consider standard horror-movie style.

The game has you playing as a character waking up from a nightmare. He finds himself in a large house with dark corners and unnerving set pieces. The entire game is black and white, with red being used to highlight violence.The goal is to get the player out of his nightmare. Everytime the player finishes an area in the game, the character finds himself waking up from another nightmare. The player must continue treading through this house until the character wakes up completely.

Gilgenbach, diagnosed with OCD, said he poured a lot of his own struggles into the game and ended up creating an avenue that lets others experience the anxiety and claustrophobia associated with the disorder. In the demo on display at the E3 conference this week, the feeling of entrapment is underscored by every progression that results in your character back in bed, waking up to new terror. As players get better with the game, though, it’s not clear if the same sense of dread will be sustained.

You can still contribute to the project and preorder on the game’s website. Look for Neverending Nightmares late this summer.