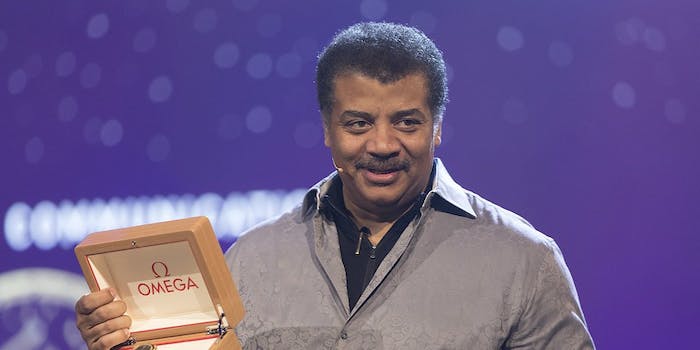 Tyson is the reigning king of “well actually” Twitter, known for debunking popular misconceptions and critiquing scientific inaccuracies in movies and TV. He’s often mocked for being a stereotypically humorless nerd, but this tweet ups the ante with a total lack of understanding for gun-related trauma. Highlighting the death toll of the weekend’s shootings in El Paso, Texas, and Dayton, Ohio, he pointed out that many more people die from other causes, and “often our emotions respond more to spectacle than to data.”

In the past 48hrs, the USA horrifically lost 34 people to mass shootings.

On average, across any 48hrs, we also lose…

Often our emotions respond more to spectacle than to data.

The tweet is already misleading because more than half of suicides in the U.S. are firearm-related, overlapping with the gun control debate around mass shootings. But if we’re going to fixate on cold, hard data over “spectacle,” it’s also true that the U.S. has a unique problem with gun violence—specifically, gun violence with a clear link to white supremacist and misogynist politics. Nowhere else in the world experiences mass shootings like this on a regular basis, and Tyson’s tweet is a wildly tone-deaf response to a sensitive issue.

The resulting backlash prompted Tyson to post a response on Facebook. Explaining that he wanted to “offer objectively true information that might help shape conversations,” he wrote:

“Where I miscalculated was that I genuinely believed the Tweet would be helpful to anyone trying to save lives in America. What I learned from the range of reactions is that for many people, some information –-my Tweet in particular — can be true but unhelpful, especially at a time when many people are either still in shock, or trying to heal – or both.

So if you are one of those people, I apologize for not knowing in advance what effect my Tweet could have on you.”

In other words, a classic “sorry if you were offended” apology, focusing more on his own intentions than the deeper reasons why people were upset.