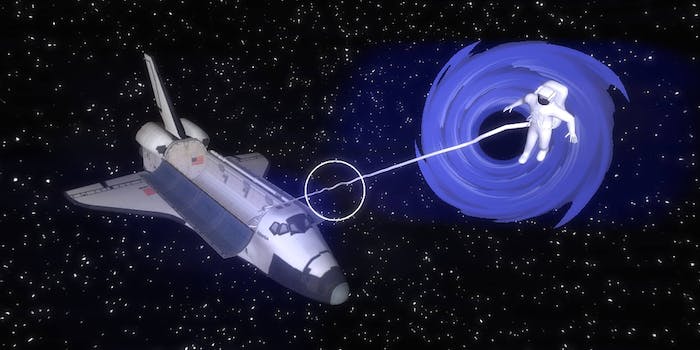 Solve gravity puzzles to get an astronaut home in Nebulous

We got a first look at the physics-based puzzler Nebulous from Nemazu Studios.

The marketplace is getting very crowded for small indie games. Scores of them jostled for attention last week at the 2015 Game Developers Conference in San Francisco.

One standout game was Nebulous, by Namazu Studios.

Many developers position their products at “Minecraft of this” or the “Hearthstone of that,” trying to latch on to existing markets before they get overcrowded.

Namazu doesn’t really care. It seems that the team just wants to create something interesting and different.

Nebulous is a very simple idea. You’re Dash Johnson, an astronaut who’s been captured by aliens. Now you must traverse gravity-based puzzles to secure your freedom.

It’s like a giant Rube Goldberg machine, but with different gravities.

Nebulous gives players two to three planes. Each plane has gravity pulling in a different direction. Players must use the pieces in each grid to help Johnson tumble his way to the end. By placing certain pieces in correct places, the Johnson should gracefully roll into the vortex to move on to the next stage.

It’s not necessarily a new idea—we’ve seen it in games like Super Mario Galaxy. Nemazu Studios, in making it a full game, expands greatly on the initial concept.

You can look out for Nebulous when it hits PC, PS4, and Oculus Rift later this year.