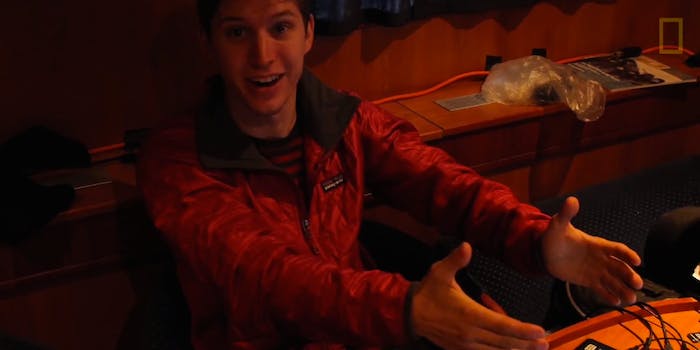 Researcher freaks out over discovery of rare shark

This video will remind you why science is so exciting.

The thrill of scientific discovery can sometimes get lost in terminology or long research times. If you need a reminder of just how exciting it can be, however, all you have to do is watch the reaction of one researcher in this new video from National Geographic.

The video highlights a National Geographic team who sent an underwater camera into the deep ocean off of Russia’s Franz Josef Land. Mechanical engineer Alan Turchik ends up watching three hours of footage from the camera with no sign of life—until the camera shakes. Then, he completely loses it.

The shaking was a sign that life was near the camera, and shortly after, a rare Greenland shark appeared. Turchik gives a priceless reaction from the moment the camera starts shaking to the Greenland shark’s arrival. He releases a string of expletives—all bleeped out in the video—in his excitement, and the look on his face makes his joy at the discovery contagious.

This was the first time the Greenland shark has been seen in this area. According to National Geographic, this is “the first glimpsed so far northeast.” Apparently catching Turchik’s reaction on film was just luck.

“Cameraman Michael Pagenkopf wanted some shots of the team members working on the boat for a film about the expedition. So he trained the lens on Turchik, who was reviewing video footage he downloaded from his remote camera after recovering it from nearly 700 feet (211 meters) down,” wrote National Geographic’s Jane J. Lee. “Just as Pagenkopf swapped his camera’s battery and started filming, the picture on Turchik’s screen started bouncing around. It didn’t take long to hear how the engineer felt about the shark.”

It’s definitely a sighting worth such a reaction, and a reminder of just how awesome scientific discovery can be. Learn more about the video and shark at National Geographic.