How Natalie Dormer became the queen of geek culture

She's smart, funny, and refuses to be pigeonholed—and fans love her for it.

Natalie Dormer is a rising star, but you’d hardly describe her as an A-lister. Beginning with her breakout role as Anne Boleyn in The Tudors, she’s made a name for herself as the go-to actress for smirky, clever women with a glint in their eyes and the demeanor of an amused sphinx.

Most people probably know her as Margaery Tyrell from Game of Thrones—unless you’re particularly into the Tumblr side of pop culture fandom, in which case she’s your unequivocal goddess and queen. 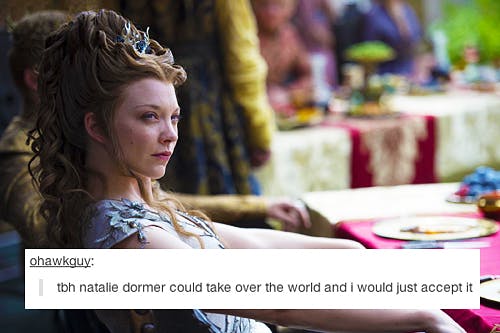 In no particular order, here are some of her geek-culture projects over the past three years: Game of Thrones, Captain America: The First Avenger, Neil Gaiman’s Neverwhere (in which she starred alongside Benedict Cumberbatch and James McAvoy), both halves of Hunger Games: Mockingjay, and a dual role as Moriarty and Irene Adler in Elementary. At this point, Doctor Who and her own superhero franchise seem like the only geek culture staples she has left to conquer.

Either Dormer’s agent is some kind of genius, or she has a machiavellian plan to worm her way into every nerd’s heart and make serious money on the convention circuit during her retirement years.

Dormer’s cult following can’t just be attributed to her love of sci-fi/fantasy franchises, though. It’s not just that she chooses a lot of so-called genre roles, it’s that she’s carved out a niche for herself as a character actress rather than a romantic lead or ingenue. Roles like Margaery Tyrell and Mockingjay’s rebel propagandist Cressida don’t just prevent her from being typecast, they give her more leeway to speak her mind during publicity interviews.

It’s near impossible to find a catchy soundbite of Natalie Dormer talking about fashion, relationships, or losing weight for a role. Instead, you see her cheerfully deriding entertainment reporters who try to fake-geek-girl her on the red carpet, or clips of her speaking on Comic-Con panels about female characters in fantasy TV.

“Women are over 50 percent of the population,” she told The Daily Beast last month. “[Mockingjay is] one of the few films that actually represents us… I’m glad that cinema is catching up to what television has known for a while: that three-dimensional, complex women get an audience engaged as much as the men. I’m a feminist in the true sense of the word. It’s about equality.”

Over the past couple of years, she has become a vocal advocate for strong female characters. Strong in the sense of characterization, that is. While Hollywood is reasonably good at including roles that fall into the category of “sexy ass-kicker,” there’s still a serious lack of variety among other female characters.

“We don’t have enough young, female antiheroes,” said Dormer recently. “We don’t accept women as antiheroes the way we do the men.” Her depictions of Margaery Tyrell and Irene Adler are ideal examples.

For the many feminist sci-fi and fantasy fans who congregate on Tumblr, Dormer is an obvious contender for No. 1 celebrity crush/fantasy godmother figure. Plus, there’s solid evidence that she’s totally into supporting the sisterhood by standing up for her younger co-stars like Sophie Turner (Sansa Stark) and Jennifer Lawrence. When Sophie Turner was asked if she had a mentor on the set of Game of Thrones, her immediate answer was Dormer.

“I can ask her the most stupid embarrassing questions,” said Turner. “I’ll be like “so what does it feel like to be in love?” and she will tell me and give advice. She’s probably my biggest mentor just in general life.” Turner later showed up to Comic-Con with her hair styled to match Dormer’s new Mockingjay undercut, much like the way Sansa mimics Margaery Tyrell in the show. And let’s be real here, if Natalie Dormer was your workplace mentor, you’d probably do the same.

Needless to say, Tumblr is full of support for the idea of Dormer and Turner as a fantasy power couple.

While actresses like Scarlett Johansson and Jennifer Lawrence have to put up with being belittled at press conferences (“How come you get the really interesting existential question, and I get the, “rabbit food” question?” Johansson wondered out loud while promoting The Avengers with Robert Downey Jr.), and do frothy magazine interviews to keep up their A-list profile, Dormer has managed to sidestep the issue by not being perceived as a traditional leading woman. Probably a smart move in the long run, because Hollywood is notorious for consigning actresses to “mom roles” once they hit 40.

Dormer’s next job is a zombie movie called Patient Zero, starring Doctor Who actor Matt Smith. No word yet on who she’ll be playing, but it’s safe to assume her character won’t be a damsel in distress. In an ideal world, her next step after that would be to land the role of Captain Marvel in the upcoming movie adaptation, a character that seems perfect thanks to her status as a feminist icon. Fanartists have already mocked up several impressions of what Dormer would look like in the Captain Marvel outfit, in case you need more persuading.

Media savvy as ever, Dormer tacitly acknowledged the idea by saying she didn’t like to comment on potential jobs, but that she loved being part of “huge mega blockbusters.” Reading between the lines, she’d probably be interested in the role. But even if Captain Marvel winds up going to an A-lister like Jessica Chastain, Dormer definitely won’t be wanting for work—or fans.