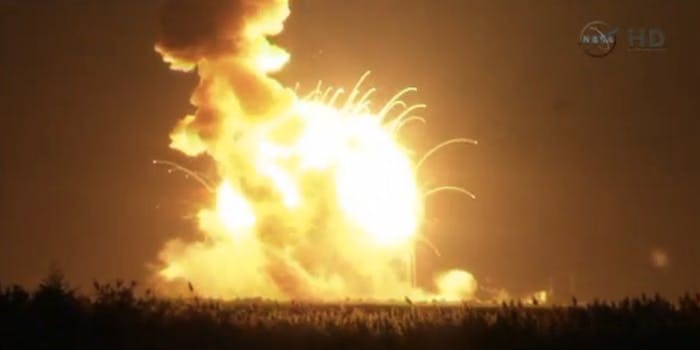 No one was harmed in the explosion.

An unmanned cargo craft on a mission to the International Space Station exploded shortly after launch Tuesday evening. The launch and subsequent explosion of the rocket were caputured on livestream on NASA’s website.

Antares, a rocket owned by NASA contractor Orbital Sciences, exploded at 6:22 pm EST. The craft would have delivered supplies and experiments to the space station. NASA confirmed shortly after the explosion that all personnel are accounted for and there were no injuries reported. The spacecraft was carrying classified crypto equipment, however, so the area around the crash has been secured, according to NASA.

Orbital Sciences is a private, Virginia-based organization contracted by NASA to make supply deliveries to the International Space Station. This would have been the third such delivery.

There has been a vehicle anomaly. We will update as soon as we are able.

It wasn’t long before members of the scientific community responded.

Very sorry to see the Antares rocket launch failure. Spaceflight is hard. Very glad that no one was hurt. Now time to sort out why & effects

#Antares– no injuries, but lots of money and effort up in smoke. Lessons will be learned from this. Space is hard. Onward. @exploreplanets