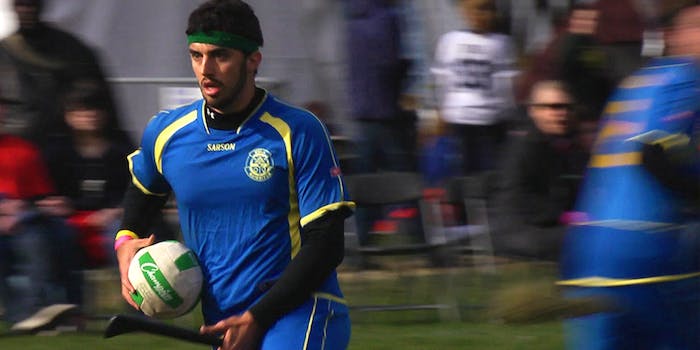 ‘Mudbloods’ is a documentary about the college quidditch scene

The world is getting its first real glimpse into muggle quidditch as a legitimate sport rather than just a peculiar offshoot of Harry Potter fandom.

Muggle quidditch, the real-life version of the Harry Potter sport played on flying broomsticks, is something like a cross between basketball, rugby, and LARPing.

Since the first tournaments in the mid-2000s, muggle quidditch has spread across U.S. college campuses and begun to catch on worldwide, getting closer to being taken seriously as a competitive sport. Which, to be fair, it is. The only real difference between muggle quidditch and the heavily ritualized atmosphere of football or soccer is that quidditch is based on a fictional game from a children’s book. Oh, and the players have to carry a broomstick between their legs all the time. (That part does take some getting used to.)

In a new documentary titled Mudbloods, the world will be getting its first real glimpse into muggle quidditch as a legitimate sport rather than just a peculiar offshoot of Harry Potter fandom. The interesting thing about this movie is the way it seems to be playing things absolutely straight. It’s billing itself as a typical sports narrative, following the underdog UCLA quidditch team on their way to the annual Quidditch World Cup.

It’s encouraging to see this type of portrayal of what can easily be dismissed as a “sport for nerds.” Even if you ignore the fact that sports already are for nerds—just ask any stats-obsessed baseball fan—muggle quidditch looks surprisingly normal, sharing the same emotional ups and downs as any other competitive sport. The players enjoy themselves because they like running around in the mud and winning games, and quidditch has the added bonus of being a team sport without the cultural baggage of football or soccer. For example, all quidditch teams are strictly co-ed, which is practically unheard-of in mainstream competitive sports.

If you’re into sports movies or Harry Potter, Mudbloods looks like pretty heartwarming stuff. The players interviewed in the trailer seem very aware of quidditch’s dorky public image, but it’s clear that the camaraderie of the sport is enough to outweigh any potential embarrassment of playing a game on flightless broomsticks.