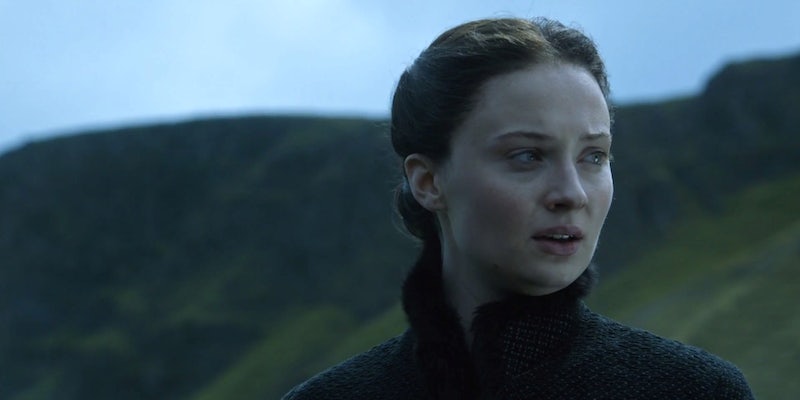 Is the title to the ‘Game of Thrones’ season finale a giant spoiler?

Every time we've accepted it won't ever happen, something sucks us back in.

As we’re gearing up to the end of Game of Thrones’s fifth season, we’re getting increasingly vague information from HBO. The official synopses, which once spelled out plot points for fans, are now short sentences that will leave some more confused than before.

However, the episode title for the final episode of the season could mean everything in terms of a plot people have waited years to see—or it could be even more wishful thinking from those holding onto a thread of hope.

HBO released the episode titles and synopses for the final two episodes of the season, set to air in June: “The Dance of Dragons” and “Mother’s Mercy.” Game of Thrones is notorious for giving its episodes titles with multiple meanings, so although “The Dance of Dragons” may be a bit self-explanatory in regards to referencing Daenerys Targaryen, “Mother’s Mercy” opens up enough speculation that it could fill a book.

Here’s what will happen in that episode, courtesy of HBO.

What does the title mean? Well, it could mean a lot.

We’ve already heard about the “Mother’s Mercy” before—in this past Sunday’s episode, “The Gift.” Cersei Lannister is asking the High Sparrow what will happen to Margaery and Loras Tyrell (under the guise of giving a damn) if either or both of them confess their crimes.

“Then they will be at the Mother’s mercy,” the High Sparrow answers. What will that involve? According to the High Sparrow, “it depends on the situation. The acts themselves, the degree of contrition.”

The most obvious connection is to Cersei, who’s currently sitting in prison for crimes against the church thanks to a confession from her cousin Lancel. In the books, she is forced to go on a walk of atonement after confessing to adultery; it’s the only way for her to get out of the Great Sept of Baelor. We know from reports that this scene made it to the show, but not what episode or what she confesses to to receive that punishment.

Other possible meanings? Daenerys or someone else could set two of her dragon children—Rhaegal and Viserion—free after a reunion at Daznak’s Pit. Will Selyse Baratheon, who’s been devoted to Melisandre and R’hllor this whole time, allow her to sacrifice her only daughter? (For now, Stannis isn’t having any of it.) We already have a mother in the form of Gilly and an expecting mother in Walda Frey, whose fate seems even more doomed every time someone mentions her pregnancy to Ramsay Bolton.

And at one point in The Winds of Winter, Arya Stark goes by the name Mercy (and we suspect part of that story will play out in season 6), but there are no mothers in sight.

But fans are still hoping beyond any sort of logic and reason that “Mother’s Mercy” could finally refer to Lady Stoneheart giving “mercy” to those who deserve it. We already got our hopes up (and quickly dashed) after Michelle Fairley again debunked the possibility of her showing up; whether people believe she’s telling the truth is another story.

As someone on Reddit pointed out, Lady Stoneheart is also referred to as “Mother Mercy” in the appendix of A Feast for Crows, where she and the Brotherhood without Banners hunted and killed the people who betrayed them. Coincidence?

It’s been ages (and seasons) since she was killed at the Red Wedding, and it’s too late for Arya to have a wolf dream of her direwolf Nymeria pulling Catelyn Stark’s body out of the river. In fact, the Freys have been rather quiet ever since they guaranteed no House of Westeros will ever trust them again. But you know who’s been rather loud about their business lately? The Boltons, who also betrayed the Starks at the Red Wedding; Roose Bolton even gave the fatal stab to Robb.

Some believe that if Catelyn won’t ever come back for the role, the show might put Sansa in her place; with Winterfell full of her enemies and a corkscrew at her side, could she use it to enact her revenge?

We won’t know for sure whether we’re getting our hopes up for nothing, so let’s not overhype it for the show fans again, OK?