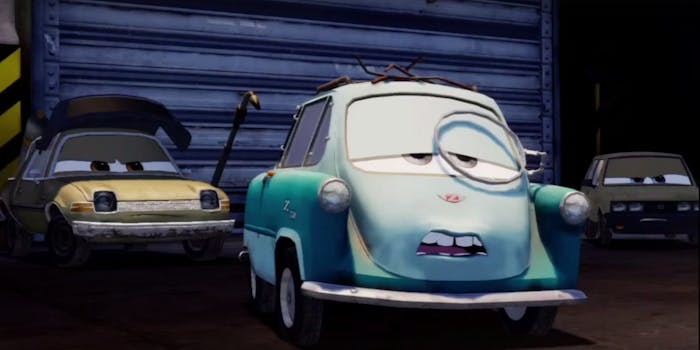 A video with talking Disney cars was for years the most popular gaming video on YouTube.

Even Minecraft, the most popular game on YouTube, can’t compete with game footage of cartoon cars with happy Disney faces driving around in circles.

When Eurogamer stumbled on a chart of the top 30 gaming videos on YouTube, the top slot belonged to Cars 2 HD Game Compilation, uploaded to YouTube by DarkZeroTV, real name Dominic Sheard, a little more than four years ago. The collection of gameplay footage from Cars 2, released in June 2011 on all the major gaming platforms, was sitting at 118M views when the chart was first published. The second most popular video at the time, the official Minecraft trailer published in December 2011 was sitting at 116M views.

The Minecraft trailer just recently raced past Cars 2 HD Game Compilation, but only by about 100K views. While everyone and their grandmother and people on the Moon know what Minecraft is, Sheard’s video completely escaped the attention of the gaming press prior to the happenstance of Eurogamer stumbling onto the “best of” chart.

Cars 2 HD Game Compilation does begin with happy automobiles from Disney’s Cars films that are also armed with chain guns and equipped with spy gadgets, so there’s a little action at the beginning to hook viewers. Three minutes into the video, however the action-laden cutscene ends, and you’re left with footage from a derivative game that looks like a cartoon NASCAR racing title with a powerup mechanic ripped straight out of Mario Kart.

Sheard told Eurogamer that he suspects the video’s title, which plays right into search engine optimization strategies, probably has something to do with the video’s popularity. Maybe people were looking for an illegal copy of Cars 2 to watch. Maybe, Sheard suggests, parents are plopping their kids down to watch Cars 2 HD Game Compilation in order to keep them quiet.

Still, for almost three years the little gameplay video bested the trailer for Minecraft, the most revolutionary video game in decades.