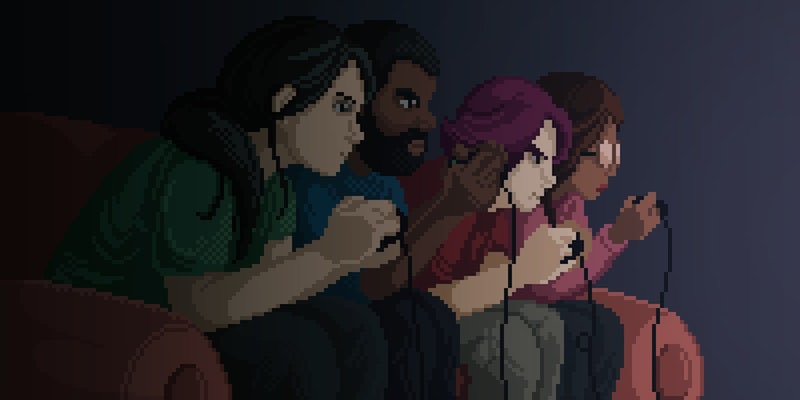 Nintendo is going to have a very big year.

Unless you have a preposterous amount of free time planned in 2016, you already have more games to look forward to than you’ll likely have time to play.

There’s no doubt that 2015 was a banner year for game releases, featuring titles like Metal Gear Solid V and Fallout 4—and 2016 is already showing a promising start. Here are 20 games with scheduled releases in 2016 that are sure to be on your radar.

That Dragon, Cancer is the story of indie developer Ryan Green and his son Joel. Joel was diagnosed with cancer when he was only a year old, and Green wanted to make a game that chronicled the experience. That Dragon, Cancer was first shown to critics in 2013 and has commanded our attention ever since.

Jonathan Blow, developer of Braid and one of the central subjects of the 2012 documentary Indie Game: The Movie, arguably has a lot to do with the resurgence interest in indie game development over the past several years. The open-world puzzle game The Witness will be the first title Blow has released since Braid, which became an early standard bearer for the “video games are art” arguments in the early 2010s, so expectations are high.

The 2012 turn-based strategy game XCOM: Enemy Unknown was a reboot of a beloved PC strategy game series. Enemy Unknown also stormed triumphantly onto consoles and then onto everyone’s Best of 2012 lists. XCOM 2 takes place years after Enemy Unknown, after the aliens have successfully occupied Earth. An expanded strategic mode, new soldier classes, and a bevy of fresh enemy types will be high points of the new game.

The long-running Street Fighter franchise is a pillar of the fighting game community, and so the arrival of the fifth numbered game in the series is eagerly awaited. Expect to see some themed Street Fighter V tournaments next year, as well as large prize purses for the competitors.

Ubisoft is moving its Tom Clancy franchise in a different direction with The Division, a game that combines elements of shooter and MMO design. New York City has been decimated by a plague, and you are part of a team tasked with retrieving valuable salvage. Players work cooperatively online to explore open-world hazard zones and face AI-controlled enemies, as well as other human teams you can either befriend or betray.

Quantum Break is part third-person action game, part television series. Shawn Ashmore (X-Men) plays Jack Joyce, who was subjected to a time-travel experiment gone wrong and is now unstuck in time. Aidan Gillen (Game of Thrones) plays Paul Serene, who was also caught in the experiment. In the game you play as Joyce, the hero. In the show you watch what the villains are up to while Joyce tries to repair the damage, as time rips itself apart.

Dark Souls III, the next game in the punishing Dark Souls action-RPG series, will surely be a darling for Twitch and YouTube streamers next year. Victory over a Dark Souls game is worn like a badge of pride for everything you have to put up with along the way, like an unforgiving checkpoint system and other players who invade your world and try to wreck your progress. Watching someone try to beat Dark Souls III live on the Web is a potential exercise in hilarity.

It’s been a long time since we’ve had a new Star Fox game. Starfighter pilot Fox McCloud has been a favorite character of Nintendo fans since 1993, so anticipation for Star Fox Zero has remained undiminished, even after a series of development delays. This time Nintendo is collaborating with Platinum Games, a studio that has a reputation for producing solid action titles. The newest Star Fox game turns the Arwing fighter into a hybrid mech design like something out of Macross and incorporates the Wii U GamePad as a targeting sensor.

Speaking of venerable franchises, the globe-spanning Uncharted series, starring archaeologist and thief Nathan Drake, has been a mainstay of the PlayStation brand since the first game was released for PlayStation 3 in 2007. Uncharted 4 continues Drake’s adventures, and as the first, original Uncharted game on PlayStation 4 it will be sure to up the ante on the graphics and the action.

Gearbox Software’s newest first-person shooter Battleborn takes place in a universe where only a single star still burns, so of course everyone in the galaxy is fighting over it. What we’ve seen of Battleborn so far has been dripping with style. Early comparisons to multiplayer online battle arena games fell flat once Gearbox started offering hands-on Battleborn demos, and we’re still not sure what the game’s overarching structure is like other than being heavily team-based, whether facing computer opponents or other players.

Finally being released next year after what feels like an interminably long hype train, No Man’s Sky promises a procedurally generated galaxy and perfectly smooth atmosphere-to-space transitions. This technical wizardry has been the game’s chief selling point thus far, especially considering that No Man’s Sky was developed by the small indie studio Hello Games. The question mark looming over the game is whether exploring the galaxy all by yourself will be compelling.

In 2011, the famous cyberpunk stealth-action/RPG series Deus Ex was rebooted with Deus Ex: Human Revolution. It took place in a world that looked like something out of Blade Runner, where cybernetic enhancement has become an everyday part of life that terrifies normal humans. In Mankind Divided, players will reprise their role as security officer Adam Jensen, who defeated a plot to turn humanity against augmentation technology and now has to face a world that’s even more terrified of “augments” than it was before.

The original Crackdown, released in 2007, was an open-world game that took place in a future where biologically enhanced supercops kept the peace while leaping off tall buildings and tossing cars around. Crackdown 3 promises the same level of chaos as in the first two games, with a new technical twist. The multiplayer mode will incorporate Microsoft’s cloud computing technology to make the environment destructible at a more granular level than ever before.

Bethesda at E3 2015 delighted fans and horrified conservative cultural critics with a blood-soaked, gore-laden trailer for a new Doom game. The series premise hasn’t changed a bit since the release of the first game in 1993. A lone human Marine is pitted against techno-demons invading our world. Guns and violence ensue.

Never mind the remakes, a brand-new Final Fantasy game is on the horizon. Development on the game effectively began back in 2006, so we can hope for another sprawling adventure, but most of what we know about Final Fantasy XV concerns the story. Developer Square Enix promises an epic, tragic tale that is steeped in Final Fantasy lore.

The first-person shooter Homefront didn’t nearly live up to expectations when it was released in 2011. The story of a United States under the yoke of an occupying North Korean army felt downright silly, and the action scenes were uninspired. Ownership of the Homefront franchise has since passed between two different publishers, but the core development team working on Homefront: The Revolution has remained intact. The second game in the series is going open-world.

The competitive multiplayer first-person shooter LawBreakers marks the next phase in the career of game developer Cliff Bleszinski, who made his name on the Unreal and Gears of War franchises. Now running his own studio, Boss Key Productions, Bleszinski is still working in the shooter genre but has embraced the free-to-play model with his next game, a PC exclusive.

The next game in the Mass Effect series has nothing to do with the Reapers, or the destruction of the Milky Way. In Andromeda, players get to control a fresh N7 agent for the Alliance Navy as they explore a fresh galaxy. Ground vehicles, largely absent since the original Mass Effect game, are back in the mix, and that’s a large sum of everything we know about the new game. Considering the Mass Effect series is hinged largely on characters and story, we can expect BioWare and Electronic Arts to continue keeping Andromeda under a tight lid, for as long as possible.

The Last Guardian is supposed to be released in 2016, but it’s been delayed so many times since first announced in 2009 that you’d be forgiven for taking this release date with a grain of salt. The Last Guardian continues to hold our attention because it’s the latest work from Fumito Ueda, who led the development of Shadow of the Colossus, one of the most emotionally gripping video games of all time.

An new HD edition of The Legend of Zelda franchise also feels like it’s been a long time coming, after it got bumped from its 2015 release date. We know the new Zelda game takes place in an open world, which equates to ample opportunity for gorgeous vista. It also stands to reason that the newest Zelda‘s will offer more unstructured activities and more exploration than any previous game in the series. Smart money bets on the wait for an HD Zelda game having been worth it.