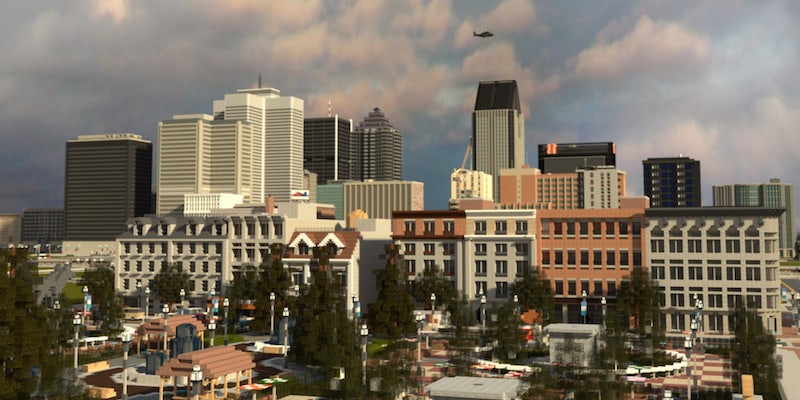 At first glance, aerial snapshots of Huntington City might like any other city in the U.S. The building structure, lighting, and coloration strike you as all too real.

That is, until you take a closer look. Only then do the buildings reveal the angular aesthetics and “blocky-ness” that defines Minecraft. This is the masterwork of Joey Girard and Raul Martinez, who all but defy the limitations of Minecraft to create near photo-realistic cities within the world of the insanely popular game.

Their current project, Huntington City, began as a engineering map that laid out the streets using real-world road engineering principles. The city was broken up into business districts, neighborhoods, and industrial areas. Construction teams supervised by Girard are assigned to specific areas, and construct ultra-realistic buildings, while teams of dedicated decorators furnish every single room in the city.

Getting on the team to work with Girard and Martinez, whose builds are hosted on the private Esterlon Community Minecraft server, requires an application process complete with examples of prior work. The work isn’t paid, but building cities like Huntington is still a job, and the seriousness and dedication that attitude represents shines through in the finished products. 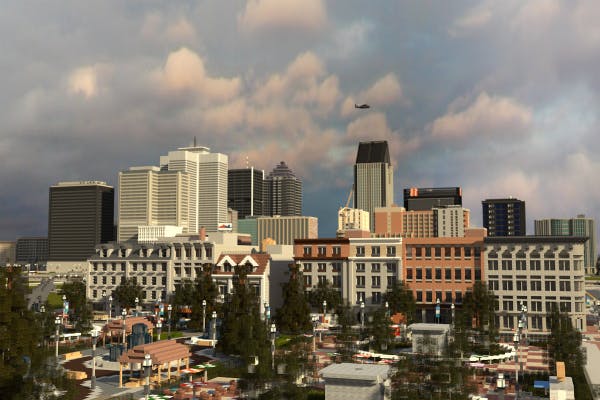 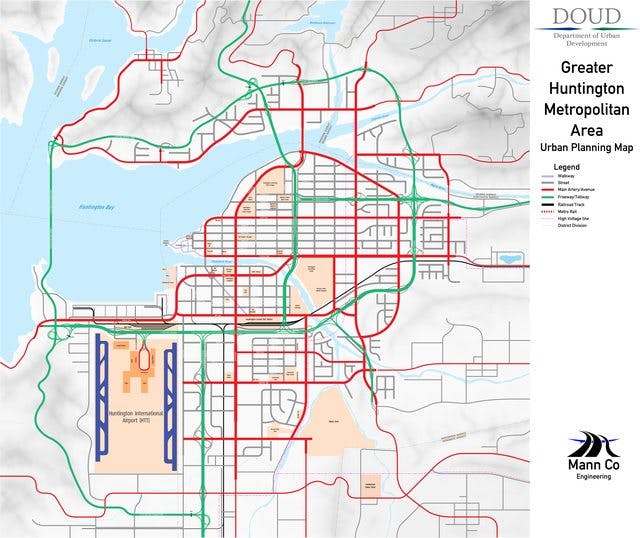 The city plan for Huntington City

The geography of Huntington City is based loosely on Montreal and its surrounding neighborhoods, the area where 16-year-old Girard, who goes by “Yazur” in the Minecraft community, resides. The precise shape and layout of the land on which the city would be built was designed by Martinez, a 24-year-old road engineer who grew up in California and currently resides in Guadalajara, Mexico. Martinez goes by “Manco” in the Minecraft community.

The quality and organization of the road construction on the Esterlon Community server has made a big impact on the Minecraft community on the Web. If you search on YouTube you’ll find videos that break down how Girard and Martinez build their roadway infrastructures to help others figure out and adopt the methodology.

“[Yazur] makes all the architectural things and I’m charge of roads and urbanism,” Martinez told the Daily Dot via email. “I started out with an empty piece of interesting land, began by deciding where neighboring cities would [go] and started planning the city with a historical progression. Then I would try simulating in my head where most traffic would want to go and that’s how I decided what kind of roads should go where, much like in [the real world].”

“Then, I started doing the urban planning where houses, stores, etc. will be,” Girard told the Daily Dot via email. “Then our builders from our community (about 20 active builders) all got their own areas to build. I got to build Blenhiem, biggest neighborhood in the city, 400 homes, all unique.” 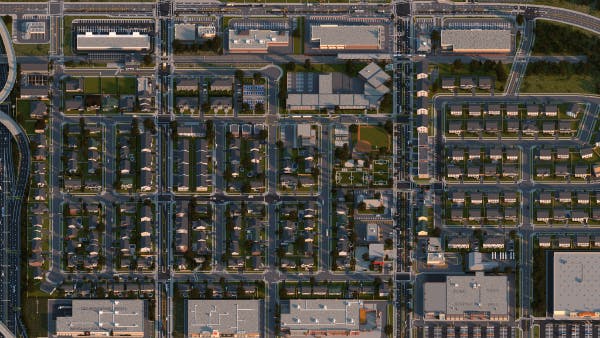 The neighborhood of Blenheim, in Huntington City 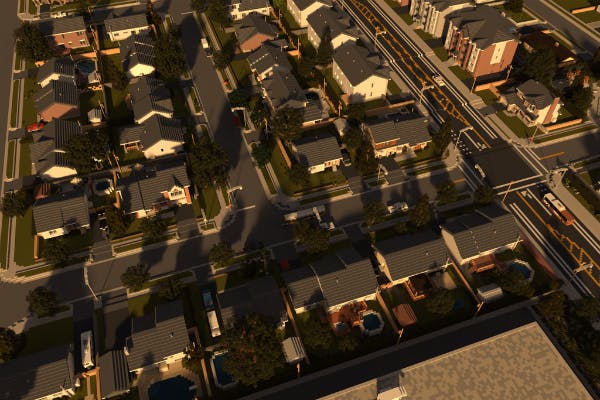 A closer look at Blenheim.

Girard and Martinez use voice chat to communicate between themselves, but organization of the entire construction team takes place on the Esterlon Community forums, where builders can also propose new projects and share ideas.

City construction also remains organized by assigning each team a specific area. “Each of our builders have their own department,” Girard wrote. “Some work in education and health care (building schools and hospitals) others in urbanism (houses and stores). Others work on building roads. Every single thing has been planned out, from terrain to mailboxes.”

The ideology of sticking to real-world analogues defines the work Girard and Martinez build on Esterlon. “Urbanistically speaking, we are probably the most unique city-building server because we incorporate all types of urban landscapes (even bad ones),” Martinez wrote. “Architecturally we also try to adhere to normal, boring old building styles like cookie cutter and neo eclectic style homes while most other servers tend to build mostly aesthetically pleasing things.” 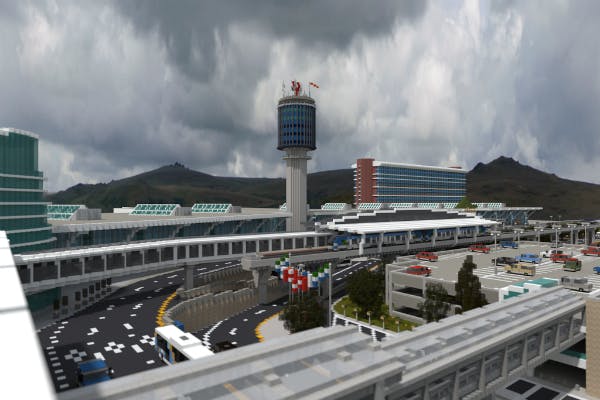 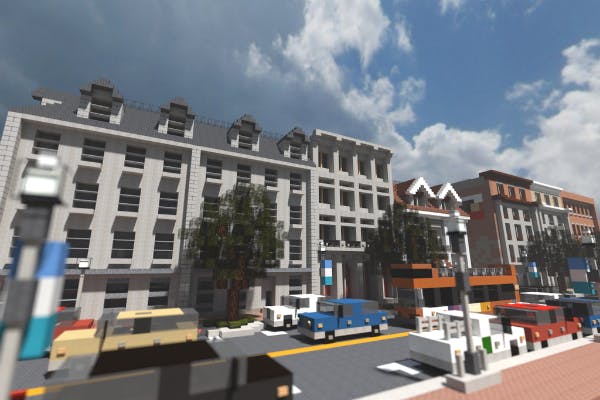 Girard first began working on ultra realistic Minecraft cities in 2011 when he founded the Alphacraft server, which would evolve into the Estrelon Community. After Martinez saw pictures of Girard’s work, Martinez in applied to join the Esterlon team in November 2013.

“Manco had seen our city works on the Internet and wanted to help us with the roads and planning,” Girard wrote. “His help really got us far, popularity wise. We are known to have the most realistic road system and roads on Minecraft. Then when we got to start building Huntington city, he became co-owner of the server.”

Girard and Martinez are the president and vice-president respectively of the Esterlon Community, whose members donate the funds to pay the roughly $45 monthly bill for server and domain costs. Girard’s and Martinez’s titles are more related to the responsibility of managing the server and its community than they are related to the management of city-building projects like Huntington.

“While I’m usually the one that tries to stick to real engineering and urbanism standards,” Martinez wrote, “Yazur comes up and says that what I wanted to do may not look too good in Minecraft and we should try stretching the truth a bit. Same thing happens in reverse where Yazur may be doing something, and I come up to him saying it should be done in a different way.”

This sort of quality control is ongoing during a build, rather than carried out in formal inspections. “Sometimes some players build homes that don’t really belong where they are or are just not our style,” Girard wrote. “Since we build a style that basically is unique to Minecraft, people need to learn it, and sometimes takes a lot of time. So we just copy their build and move it to a storage world where it is either edited to the city scale and style, or left there.”

“As for structural matters,” Martinez wrote, “that’s more tricky because I can’t go checking everyone’s buildings to see if they would be structurally sound while they are building. Instead, if it looks like it won’t fall from the outside then it’s OK, at least until Minecraft gets earthquakes.” 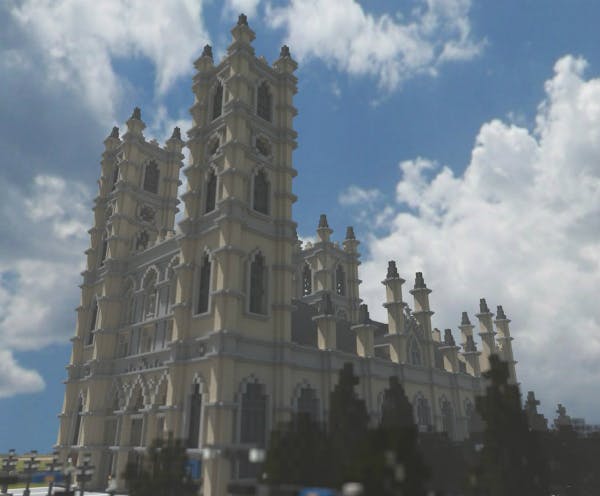 Girard is picky about applicants he admits onto the team, but can often find alternative roles for those who can’t be tasked with entire buildings or city sections, but who show promise.

“Sometimes people really want to get involved into the project but their exterior skills aren’t good enough, so we propose them furnishing instead,” Girard said. “It is easier for them, they basically furnish stuff exterior builders didn’t get to finish, it can be anything depending on what they feel like working on. That way they can see how we build and learn tricks with time if they ever want to get to exterior building.”

“We furnish everything,” Girard wrote. “Office buildings are filled with offices. Residential towers all have bedrooms/bathrooms/kitchen, We furnish everything that is furnish-able, like that huge mall…which is fully furnished with a theater section, stores, bathrooms etc.” 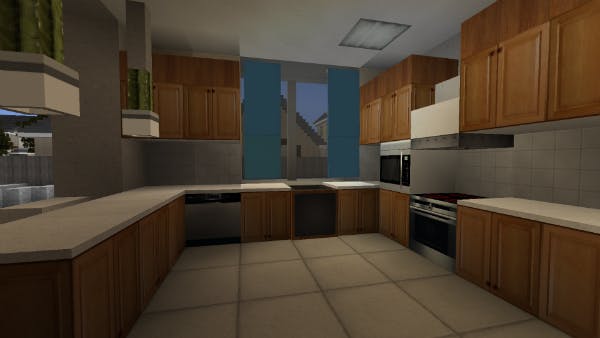 A kitchen in a Huntington City home. 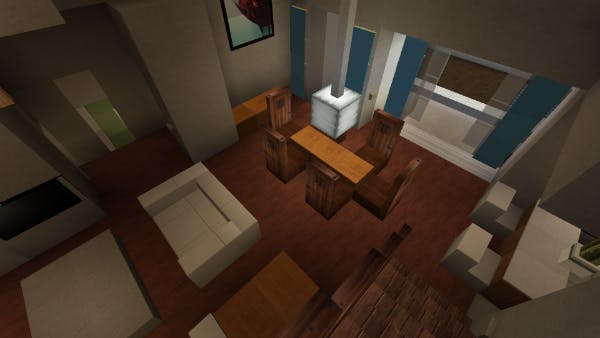 A living room in a house in one of Huntington City’s suburbs.

The materials that Girard and Martinez and their team use are publicly available online. The Huntington Resource Pack includes all of the textures that the Esterlon Community designed specifically for the project, as well as items like construction jackets, construction helmets, and street cones for a building crew to wear and use during their builds.

Girard is also sharing his city-building tricks and expertise as co-author of the book Block City: How to Build Incredible Worlds in Minecraft, published by Abrams Books, which will be released on May 19. Block City is not focused solely on the works of the Esterlon Community. It is an overview of a collection of Minecraft cities, with step-by-step tutorials to teach new builders how to replicate, and perhaps improve upon, the style and quality of all the featured builds.