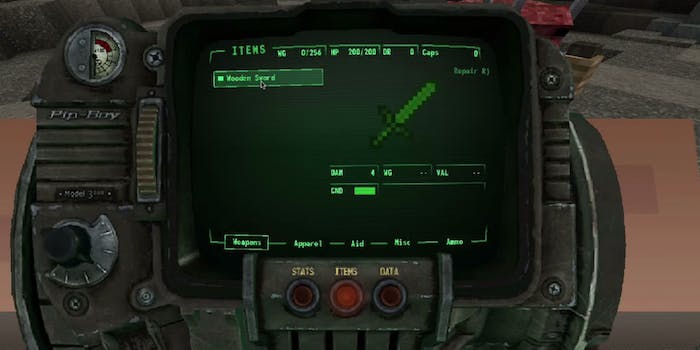 There’s no V.A.T.S. targeting, but it’s still a working Pip-Boy, which is awesome.

We have another item to add to our list of ways to understand just how attached people are to Fallout, and why they freaked out over the Fallout 4 reveal.

Project Wasteland is a Minecraft mod that attempts not only to lay Fallout-inspired skins over Minecraft textures, it also adds mobs like the two-headed Brahmin cows that are icons of the Fallout series. The coolest demonstration so far of what Project Wasteland adds to Minecraft is a wrist-mounted Pip-Boy unit, that is standard-issue gear for Vault dwellers who tromp into the wasteland.

The Pip-Boy provides a combination of inventory management, character stats reference, and map access, all on a little display attached to your character’s wrist. In many RPGs it feels like you’re popping out of the game world for a moment, to do anything related to those functions. In Fallout 3 and Fallout: New Vegas, it feels like your character is just taking a moment to look down at their Pip-Boy.

Getting a Pip-Boy working within Minecraft is awesome for a Fallout fan, even if seeing “Wooden Sword” on a computer monitor’s inventory screen is weird.

You can follow the development of Project Wasteland on its Minecraft Forum page.