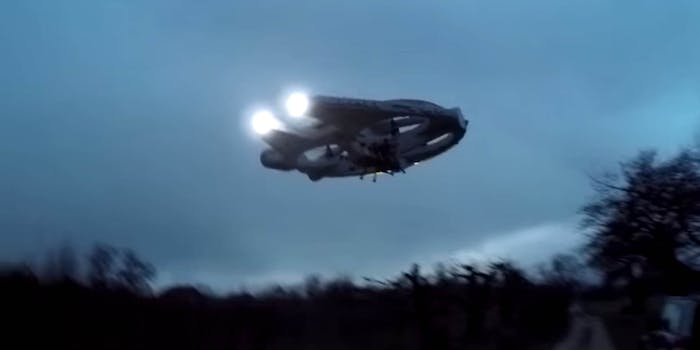 There is a real, working Millennium Falcon drone

But can it make the Kessel Run in less than 12 parsecs?

Drones have many practical uses, from surveying crop fields to filming movies to documenting climate change. But the best technology is part practical, part recreational. That’s where the Millennium Falcon comes in.

Han Solo’s heavily modified YT-1300 light freighter from the original Star Wars trilogy is one of the most iconic spaceships in pop culture. It’s no wonder, then, that a drone enthusiast named Olivier sought to combine the affordable power and speed of today’s drones with the irresistible shape and design of the Millennium Falcon.

In a Reddit thread on the site’s DIY forum, Olivier explained that he built the Falcon around a powerful quadcopter model. The quadcopter “is an overpowered little beast,” he wrote, adding that it was “easily capable of 90km/h [56 miles per hour] horizontal speed.” With his special customizations, however, that dropped to “probably about 30km/h,” or 19 mph.

“If I try to go faster with more angle it’s making a cool backflip,” Olivier added.

The entire project cost just over 1,000 Euros, or $1,142, with the vast majority of that going into the quadcopter unit and its radio controller.

You can watch the radio-controlled Falcon‘s first two flights below.

What’s next for Olivier? “A [TIE fighter] is waiting in line,” he said, “But a lot of problems to solve because of the tall solar panels.”