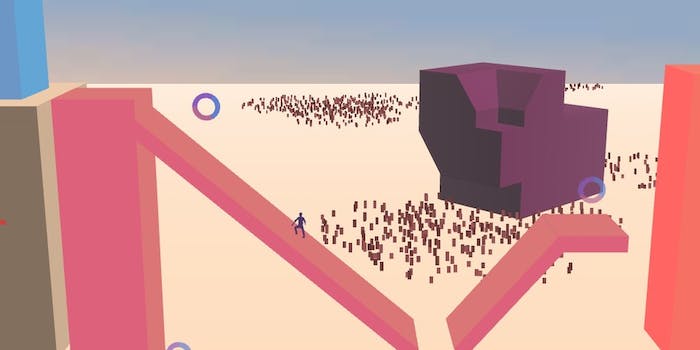 Get lost in the geometric world of Metrico

Pushing your brain, and your PS Vita, to the limits.

Video games have been around long enough that we have an almost innate understanding of how to approach them.

But what if a game were to come around with the goal of turning those perceived notions on their head. Metrico, an exclusive game for Sony’s PS Vita handheld from Dutch studio Digital Dreams, plans to do just that.

Metrico is a puzzle platformer. You play as a boy or girl trying to get to the finish line. Along the way there are platforms and gaps you must run and jump across to reach the end. The cool thing about Metrico is that many of the landmarks in the game are denoted by speech bubbles. For example, you may reach a platform that has a speech bubble that says 0/7. Every time you make a jump, that platform will go up a bit, showing 1/7, 2/7, etc. The entire world is manipulated by your movements and actions.

Running forward, backward, jumping, and even falling off a ledge and dying manipulates the environment. Each level has a few different puzzles. Each puzzle makes you experiment—and that’s where a lot of the charm and fun in Metrico comes from. The game really wants you to push the mechanics to their limits.

The game uses all facets of the PS Vita. From its touch screen, to its motion controls, and even the camera. This is both good and bad. The gameplay never gets stale, there’s always a sense of variety and something new to learn and experiment with. But things can also get overwhelming when you’re stuck in a puzzle. When this happens you find yourself shaking your handheld, mashing the buttons, and touching the screen to try and elicit some type of response. If someone saw you doing this in public, you’d feel a bit silly.

The game forces you to use mechanics sometimes past your comfort level. You will find yourself twisting your Vita in multiple directions to the point where it can become difficult to control.

The puzzles are difficult, but never so hard that you want to give up and never play again. It strikes a balance.

The game itself was actually inspired by infographics. That means the art style takes on a minimalistic aesthetic. Honestly though, the game is beautiful. There are some really grand vista’s filled with a flurry of geometric shapes.

Even with its relatively non-intensive graphical style, the game does hiccup from time to time. When moving from one puzzle to the next, the game stutters to load the next set piece. It’s not a deal breaker by any means, but it does slow things down.

Be sure to plug in a set of headphones while playing Metrico. The music and sound help from Palmbomen really makes Metrico incredibly engrossing, giving players a sense of feeling and place within the game. The synthetic tones, drones, and melodies really make you feel lost inside a retro computer.

Overall, Metrico is a daring game. It expects a lot from us and forces us out of our comfort zones. It’s constantly pushing our limits, seeing if we’re willing to do whatever it takes to win.