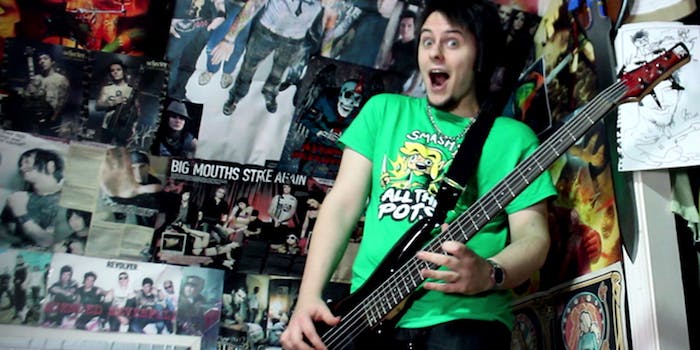 Oh, and he made the entire thing in his bedroom.

It is a beautiful homage to gaming and an outstanding piece of music composition. It’s had me laughing with joy and getting teary-eyed with nostalgia over the half dozen times I’ve listened to it so far. And Conroy made the entire thing in his bedroom.

“I’ve been shooting crappy home movies since I was in middle school and stopped when I got into music in high school,” Conroy told me via email. “My YouTube presence was based on a challenge that I gave myself to make a video game cover/medley every week for a year (ended up doing it for 3 years! This video was the finale!)”

Correcting for my obvious bias as a video game player, I’m also a former jazz musician, and I’m familiar with all the original music he’s vamping off in this video. Conroy’s ability to translate into metal and smoothly transition through so many different types of songs across the space of this video is impressive. Conroy doesn’t think it’s that big of a deal. “I’ve made some pretty weird songs metal over the years, so I didn’t really worry about that in the song choice stage,” he said.

Explaining his musical lineage, Conroy said he currently studies with Phillip DeFremery. “Phil is a monster player and writer. I would go so far as to call him a philosopher in the ways of the guitar,” said Conroy. DeFremery, in turn, studied with Oscar Ghiglia, who studied with Andrés Segovia. “Segovia was arguably the Hendrix of the classical guitar world in the 20th century,” Conroy said.

Even if you don’t recognize any of those names, you can probably take Conroy’s word on it. What you should recognize is that Conroy is playing what looks like a genuine Ocarina from The Legend of Zelda: Ocarina of Time when he’s playing the game’s theme in the video.

“STLOcarina got a hold of me a year or so ago and asked if I would play one of their ocarinas in a video,” Conroy said. “Being relatively unhealthy with my Zelda obsession, I said yes and buried myself in a corner for a few days and squeaked like hell on it, until I could make something arguably musical.”

I also recognized, in another unabashedly geeky moment, that Conroy has the watch from GoldenEye, the most iconic game released on the Nintendo 64, and arguably the progenitor of first-person shooters on game consoles, hanging on the neck of his guitar as he’s playing the GoldenEye 007 theme seven minutes into the video. I had to ask if it was real.

“Well, define real. I saw a post on Reddit a little over a year ago for a website that allowed for custom images on sports watches and people were getting the Goldeneye watch. I just HAD to have it. The only thing more unhealthy than my obsession with Zelda is my obsession with James Bond and Goldeneye.”

Ultimately, it’s that passion that makes Conroy’s metal tribute so fantastic. It’s a perfect blend of his geekery over guitar lineage and video games.

Correction: A previous version of this story misrepresented the amount of time this video took to make. Conroy emailed to clarify that while he spent three years preparing these performances, the video itself actually came together in a mere eight days.