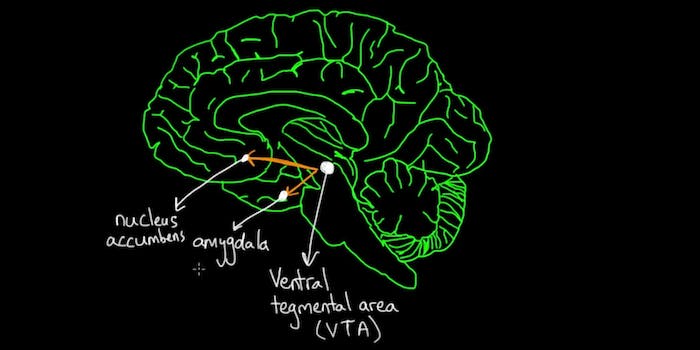 Scientists aren’t immune to the lure of the impact factor

If you want to get ahead in academia, you always have to be publishing your work. And if you really want to get ahead, you have to publish in high-impact journals like Science, Nature, or Cell.

The problem with these high-impact journals is that their impact is calculated by a number called the “impact factor.” And while using a numerical value to judge the clout of a journal seems like a good idea, sometimes journals will stack the deck in their favor to beef up their impact factor.

The impact factor is so sexy and alluring to researchers that the prospect of seeing their work published in such a journal is more exciting than seeing a big pile of money, according to a study published in PLOS One.

In possibly the most meta study ever performed, neuroscientists put other neuroscientists into an MRI machine and mapped their brain’s response to anticipating different amounts of money or a mock up of a study of their research interests with their name in either a low, medium, or high-impact journal. The researchers watched what happened in a part of their brains called the nucleus accumbens, which modulates how our behavior to receive an award. This is the part of the brain that people like to equate with a drug high when it’s activated. Really what it does is reinforce a particular reward (food, sex, money, and yes, drugs) through the anticipation of receiving that reward. You know that feeling you get when your favorite dish from your favorite restaurant arrives at your table? The smell and look of that dish is almost better than the first bite. That’s the nucleus accumbens at work. It gets flooded with dopamine when you perceive that reward is within reach, making you feel good and want to seek out that reward again.

For scientists, apparently, the anticipation of their name in a big journal is similar to seeing a huge stack of cash. And it makes sense because the better your publication history (i.e. the more high-impact journals you’ve published in) the more likely you’ll be offered a tenure-track position at a prestigious research university.

We should note here that this article seems to be published with at least a partial sense of humor.

So while the scientists were in the machine, they showed them a code for the coming reward. They then measured the time it took the researchers to press a button in response to the code, and if they did so in a short enough amount of time they got to see the reward image (varying stacks of money or their name in various journals like Nature Neuroscience.)

This can indicate a few things. The knee-jerk interpretation is that researchers are really, really into the idea of seeing their name in a big journal. This could be not only because it helps pave the way toward career success, but also because high-impact journals are associated with very interesting, important work. This is of course not always the case and high-impact journals also post a lot of retractions to highly-cited, interesting work. But nonetheless, if you really believe what you’re doing is important work, the validation of having a big name journal agree with you must be pretty amazing.

On the other hand, these researchers all specialized in neuroscience and therefore knew exactly what they were getting into. So there may be some intense bias going on here on the part of the subjects since they can easily guess what the researchers are looking for. Add to it that there was a pretty small sample size (15 by the end of the trial,) and you don’t have very strong results.

They also mentioned that most of the participants in the study were early-career neuroscientists (an average of 5 years in) so they may be a bit more eager for that big, juicy publication than seasoned researchers with a dozen or so Science articles under their belt.

But it is an amusing study, and one the researchers said they hope is picked up and replicated in earnest. It would be a very science-y way to prove the value of a somewhat arbitrary number, and show how the impact factor is, for lack of a better word, impacting research.