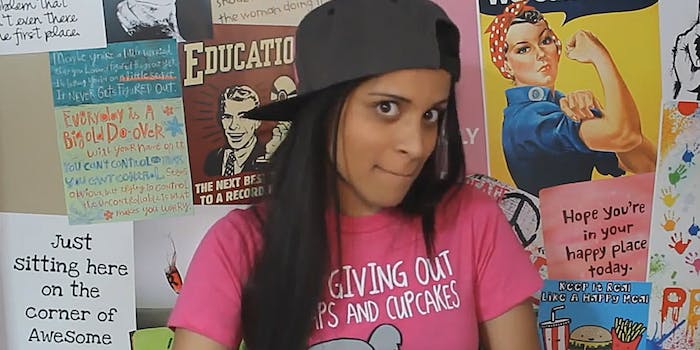 AsapSCIENCE tackles myths about women and PMS, winds up making it worse

Is it that time of the month? No—at least not the one you think.

It’s never an easy task to tackle one of the most pervasive stereotypes about women, but the YouTube explainers at AsapSCIENCE, having previously brought us the science of orgasms, have attempted it anyway—although we sort of wish they hadn’t.

In their latest video, they attempt to debunk the myths surrounding the menstrual cycle and the hormonal impact it has on women with uteruses. However, in their zeal to describe the actual hormonal changes women undergo, they may have made their depiction of women a little too over-the-top.

The biggest myth surrounding women and periods is the simplest and yet most frequently overlooked in discussions about women: the idea that when a woman is on her period, she’s less hormonally stable than at other times.

The error in this myth can be found in the name of PMS itself: it’s Pre-Menstrual Syndrome. That means the lowered levels of Seratonin and increased activity of the amygdala that contribute to mood swings in (some) women are at their highest a week to two weeks before a woman actually starts her period.

Another myth is that women all experience the effects of elevated hormones in the same way. In reality, the actual influence of increased hormone levels varies widely from person to person and based on a number of other factors related to overall health. It’s true that women can experience increased anxiety during PMS, but these symptoms are generally exaggerated in the video.

“I can become a hot mess and I cannot control it,” explains guest and popular YouTuber Lilly Singh.

While the attempt to set the record straight is a noble one, the video mostly comes off as a perpetuation of the myth that women are slaves to their unpredictable hormones; it contributes to the kind of puerile thinking that leads to every “women aren’t rational” comment.

Yes, some women do experience hormonal changes and it can drastically impact moods. But this is a lot like the claim that men are helpless to control their sex drives: Sure, there may be some truth to it, but it doesn’t mean women are completely incapable of logical thought and rational thinking.

But one thing the video does make clear is that women who endure PMS followed by the often-hardcore effects of the body’s monthly shedding of the lining of the uterus are anything but weak.