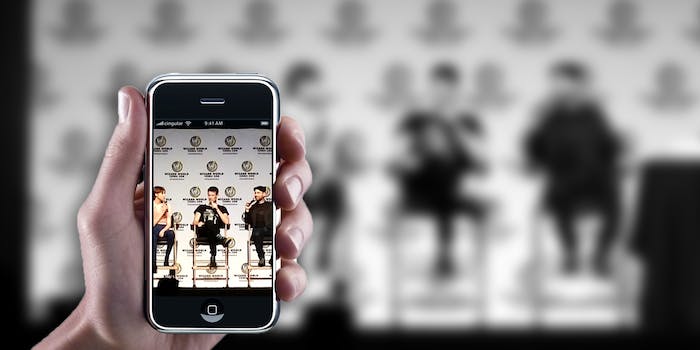 Smith and Gillan answered fans' questions about life aboard the TARDIS.

On Saturday, more than 3,500 Whovians packed the Grand Ballroom of the Pennsylvania Convention Center during Wizard World, for a very special opportunity. Longtime Doctor Who stars Matt Smith and Karen Gillan took to the stage to answer fans’ questions about life aboard the TARDIS throughout the Eleventh Doctor’s reign, and discuss the future of the program. The new season kick offs in August with Peter Capaldi taking over Smith’s role.

With Smith’s departure from the series still fresh in everyone’s minds, a lot of discussion was dedicated to the final moments of Amy Pond and the Eleventh Doctor, which both actors described as “very emotional and sad.”

Were you allowed to keep anything from the set?

Gillan: I took the binoculars from TARDIS. I was like “This is the most important role I’ve ever had and these are mine!”

Smith: I took my Sonic and wardrobe actually let me keep my whole costume.

When you were working with David Tennant, was it competitive at all?

Smith: Frankly, no. In fact, it was kind of fanboy-ish for both of us. We were both like, “Oooh, that’s Doctor Who!”

What was your favorite memory from the set?

Smith: Well, all of it. But I distinctly remember the first screening in New York City. It was our first time realizing, “Hey, Americans like Doctor Who!”

Gillan: Mine was when Matt had to do the whale’s tongue thing.

Who are your acting influences?

Gillan: I always liked Tilda Swinton. She had so many great sci-fi roles. Oh, and everyone from Friends.

What do you think Peter Capaldi will bring to the role?

Smith: He’ll bring a total reinvention. The man is very bold and interesting.

Gillan: I just hope he swears the whole time.

Smith: Also, and not to sound bitter, but the new series is getting to go to Mexico City, Seoul, all of these wonderful places. We went to…Belfast.

What traits of your characters would you have developed more?

Smith: I think if my Doctor had carried on, he would have become meaner, because he constantly had the universe weighing on his shoulders.

Have either of you done Shakespeare?

Smith: I’ve never uttered a word of Shakespeare in my life. Well, maybe in private in my Doctor Who costume. It was nothing like David Tennant’s Hamlet.

Gillan: I would love to play Lady Macbeth.

Smith: And I could be Macbeth! Let’s make this happen!

If you could play any role at all, who would it be?

Gillan: I would love to play some sort of singer, maybe Carole King.