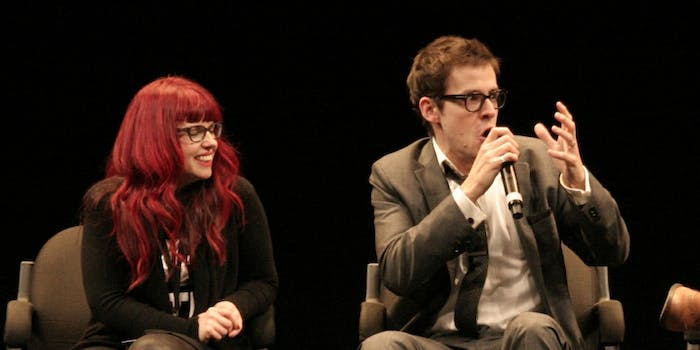 Proceeds will go to charity.

Fraction is best known as the writer of bestselling Marvel comic Hawkeye, and has a history of donating merchandise commissions to the charity Futures Without Violence. Fraction has decided to match all donations that come through the WeLoveFine Hawkeye merchandise store, so if you were thinking of buying a Hawkguy T-shirt, now’s a good time!

On his Tumblr blog, Fraction wrote:

“So there’s a movie out this weekend based on books that romanticize, fetishize, glamorize and normalize abusive relationships.

And while sex is great and finding someone into all the stuff you’re into is great, sex is not consent to violence, a relationship is not permission to abuse, and there are thousands of women and children who have to deal with that fundamental and erroneous misconstruing of truth and wild misinterpretation of love every day.”

The Fifty Shades series has been inspiring criticism and backlash ever since the first book hit bestseller lists, and will continue to do so well after the final movie comes out. There are already several campaigns to boycott the new movie, mostly from feminists who believe the relationship between Christian and Anastasia is abusive. That’s not because it involves a bit of light bondage and spanking: It has more to do with Christian Grey’s controlling behavior, which many people argue is a textbook example of domestic abuse.

Fifty Shades of Grey is estimated to have had the highest February opening day in history, beating The Passion of the Christ in 2004. Two sequels have already been given the green light based on box office stats for pre-sold tickets, and it’s on track to make $75-90 million over its opening weekend, partly due to Valentine’s Day audiences.

Among various merchandising deals and unofficial sex toy tie-ins, the film’s success has evidently led to an uptick in donations to women’s charities. A mixed blessing perhaps, but it’s better than nothing.