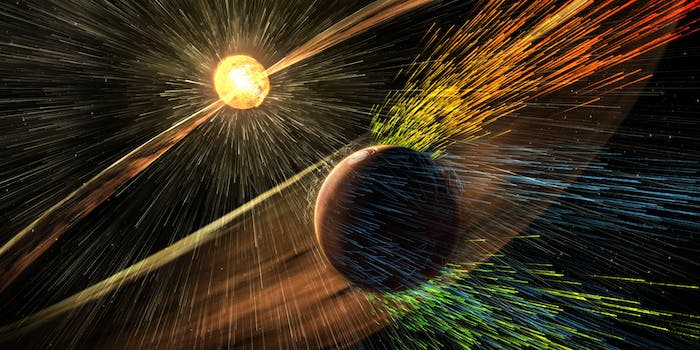 NASA has figured out what’s happening to atmosphere on Mars

It’s possible the planet used to be capable of supporting life.

NASA scientists announced today that it finally solved the mystery of why Mars’s atmosphere is so thin, despite the red planet’s proximity and similarity to Earth.

Solar wind—rapid-moving charged particles spewing from the sun—stripped Mars of its once dense atmosphere thought to be capable of supporting water and, possibly, life.

“Mars appears to have had a thick atmosphere warm enough to support liquid water which is a key ingredient and medium for life as we currently know it,” John Grunsfeld, astronaut and associate administrator for the NASA Science Mission Directorate in Washington, said in a press release.

The researchers came to this conclusion thanks to data collected by the MAVEN probe, launched in 2013 to study the atmosphere of Mars. According to the data, solar wind takes off about quarter of a pound of atmosphere every second. This loss was greater in March 2015, when a series of solar storms—huge ejections of charged particles from increased solar activity—barraged the planet.

The solar wind is comprised of protons and electrons moving at around 1 million miles per hour, the press release says. The particles form a magnetic field, which creates an electrical field when it passes over the charged gas molecules in the upper layer of the atmosphere. These molecules are then torn from the atmosphere and flung out into space. Here’s a video:

Researchers were calling this atmospheric thinning a “mystery” because all the evidence of water on Mars suggested it was once a planet that supported a lot of water. But without the dense blanket of gas keeping the planet warm, water can’t stick around for very long.

This same fate doesn’t befall Earth because we’re protected by our magnetic field, according to a Washington Post article.

Researchers say that this information will help them prepare technologies to keep the astronauts safe in the upcoming manned mission to Mars.

The question of how to terraform and colonize Mars has been percolating in the minds of scientists, entrepreneurs, and laypeople alike. But before you get all excited about creating a magnetic field on Mars to terraform for colonization, perhaps read this article on Quartz about why it’s ridiculous to try and colonize Mars in the first place.