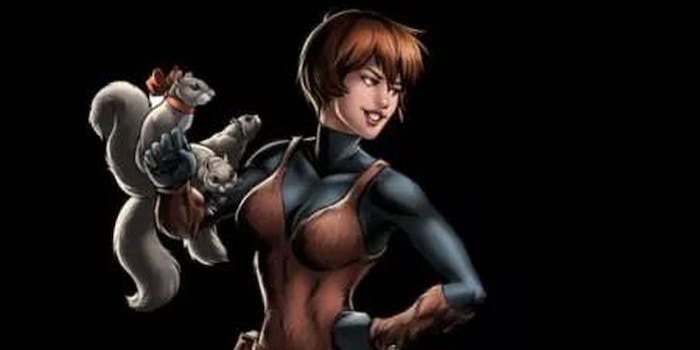 Fresh off the success of Guardians of the Galaxy's gun-toting raccoon, has Marvel decided to bypass a Black Widow movie for Squirrel Girl?

It’s 2014 and there’s still no Black Widow movie, but Marvel fans may have a new female superhero to look forward to on the big screen soon: Squirrel Girl.

Bleeding Cool has pointed out that Marvel, which usually signifies intent to move its comics into other mediums by trademarking characters and titles, is full up on recent TV and film franchises, like Guardians of the Galaxy, Age of Ultron, and Agent Carter. Also in the mix? Squirrel Girl.

She’s a girl who’s also a squirrel who’s also a—look, just know that she was created by Steve Ditko, the legendary artist who gave the world Spider-Man and Doctor Strange, after writer Will Murray came up with the concept as a way to get back to the fun-loving joy of comics. 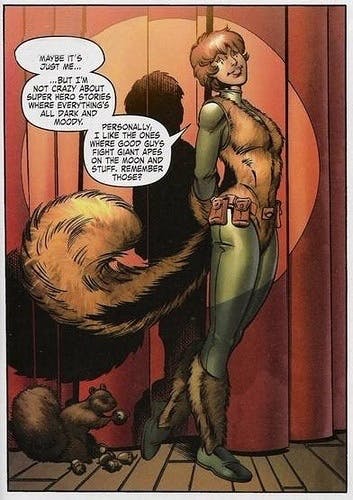 Squirrel Girl, real name Doreen Green, is a ’90s child, a tongue-in-cheek superhero with the power to control squirrels named Tippy Toes and Monkey Joe. She debuted in 1992 as a spunky 14-year-old who boldly asked Iron Man for a spot in the Avengers. His answer? “Maybe when you’re older.” Since then she’s gotten it on with Wolverine, hung out with her own minor team of superheroes called the “Great Lakes Avengers,” bested Deadpool in a merc-on-squirrel fight, flirted with Daredevil, and served as nanny for Luke Cage and Jessica Jones.

You might not think any of that is enough to make Squirrel Girl a compelling element for a TV or film franchise; but Marvel, who trademarked the name two weeks ago, was clearly anticipating a positive return on this weekend’s Guardians of the Galaxy, which despite being a film headlined entirely by side characters, including a talking tree and a talking raccoon, is already breaking advance sales records, and is poised to bring in over $70 million in its opening take.

Moreover, there’s plenty of reason to believe, given the breakout success of quirky irreverant supergirl Kamala Khan, that Squirrel Girl will be a hit with audiences. Plus, she’s the kind of character that could work equally well as a side-character in a film franchise or as the lead in her own animated series. She’s already showed up briefly in an episode of Ultimate Spider-Man:

“[J]ust a reminder that this girl managed to break up a mob with an army of Squirrels and still has not even a cameo in movies to tribute her awesome,” wrote Tumblr user all-things-squirrel-girl 15 days ago, in what may be the most prophetic post of the year. We did mention she can control her own squirrel army, right? Also she has claws and super-strong teeth, perfect for cracking nuts and-or-bones. 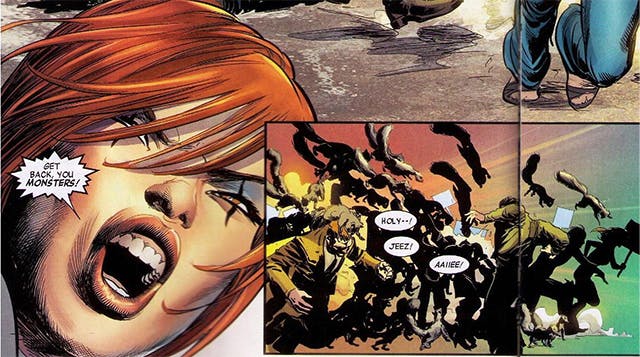 Meanwhile, while Marvel fans may be excited for the news, they haven’t taken their eyes off the prize:

So Lucy is a racist pile of trash but it’s doing well because everyone wants a fucking Black Widow movie already.

That’s right, Marvel. You can trademark all the adorable furry side characters you want, but there’s only one Black Widow, and we’re still waiting.

Meanwhile, we’ll be speculating about whether Squirrel Girl may finally be making her way to the Avengers Initiative in an upcoming sequel. Heck, we’d even tune in for The Adventures of Squirrel Girl & Friends on Saturday morning.

Now that you’ve fed us machine-gun-toting raccoons, the sky’s the limit.

(Or at least that one really high branch with all the acorns.)