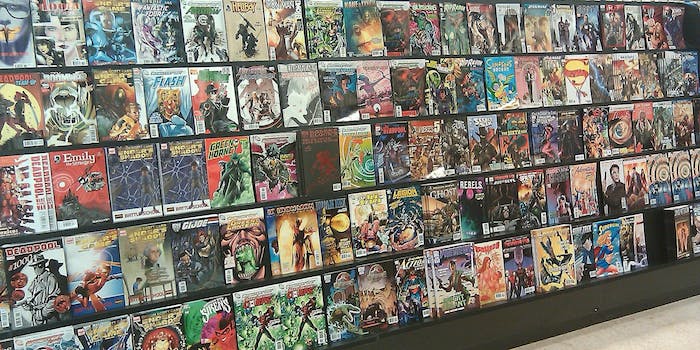 After all the hubbub about these comics, your local store may not even get a chance to order them.

Did Marvel just price itself out of its own push for diversity?

Despite ongoing controversy surrounding its much-touted hip-hop variant covers, Marvel has stood by the initiative as a way to speak to a broader demographic of readers.

But local comic shop retailers are reporting that the comics giant has made the covers too expensive to put into the hands of readers.

Comics fans in Alaska don’t have much choice when it comes to local comics stores. There’s a thriving geek scene, but the only major cities, Fairbanks and Anchorage, are 500 miles apart.

So when John Seiler of The Comic Shop in Fairbanks got last month’s order requirements for Marvel stock, he was dismayed to see that Marvel was asking comic stores to order unusually high numbers of back issues to be eligible to stock the new, in-demand variants.

Variant covers are special editions of issues with art by a prominent guest artist. Comics fans often covet variants (which sell at a premium price), so Marvel favors distributing them from local comic shops, which put in regular orders, while also pushing stores to buy more. (DC variants are often sold separately from regular orders.)

Normally, the requirements to get a variant Marvel cover are easy: You just have to order your normal amount—say 10-25 copies of an upcoming issue—to get a single issue with a variant cover, which might then sell for between $15–$25.

But interest in the hip-hop variant covers is unusually high, and they come as part of Marvel’s push for its All New, All Different fall lineup. So, the company is asking comics shops for large order increases in order to get them. Through a source that asked to remain anonymous, the Daily Dot received examples of order requirements issued to comics shops earlier this week for next month’s issues. Here are examples of order requirements for various variant covers of the All-New, All-Different Avengers title. Several of the variants are distributed the standard way, but the hip-hop variants require stores to order 150 percent more of Avengers than their regular order for a different title altogether, Old Man Logan. 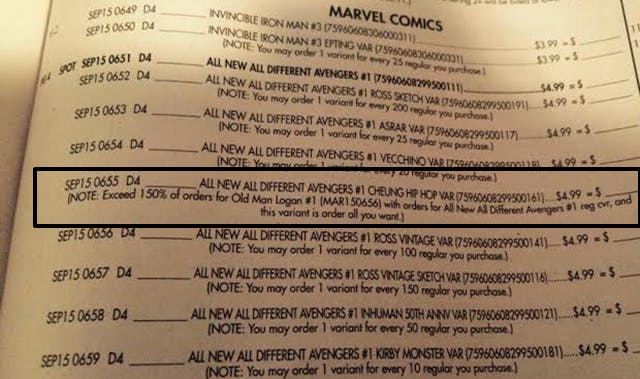 Order requirements for Marvel variants for the month of September; the hip-hop variant is highlighted in black

Shops that ordered 50 copies of Old Man Logan would have to order 75 copies of All-New, All-Different Avengers in order to be eligible to buy the hip-hop variant for Avengers. Given that shops that meet the minimum can order unlimited quantities of the variant—books they can sell at a premium price—it doesn’t seem like a bad deal. That is, until you start adding up the cost of the additional orders for all 35 titles that currently have a hip-hop variant. Titles like X-Men, Hawkeye, Ultimates, and Ms. Marvel, require orders of 175 percent more than the store’s order for back issues of those titles.

At $4 per comic, this would leave stores having to spend hundreds of dollars if they want all or most of the hip-hop variants. Seiler explained that it would be “nearly impossible” for stores of The Comic Shop’s size to order books like Ms. Marvel because they just can’t afford the excess amounts. Where normally they might order 40-50 copies of the next issue, having to order 175 percent of what they ordered for Ms. Marvel #16 means that the store would wind up having to order 70-87 copies of the next issue—extra books the shop may never sell.

“Our best book sells about 40 copies, so for our store… that option is impossible,” Seiler said.

Seiler isn’t the only comic retailer who’s noticed the complicated numbers. An anonymous disgruntled comic shop employee made an infographic of last month’s order requirements and shared it on Reddit and Imgur. 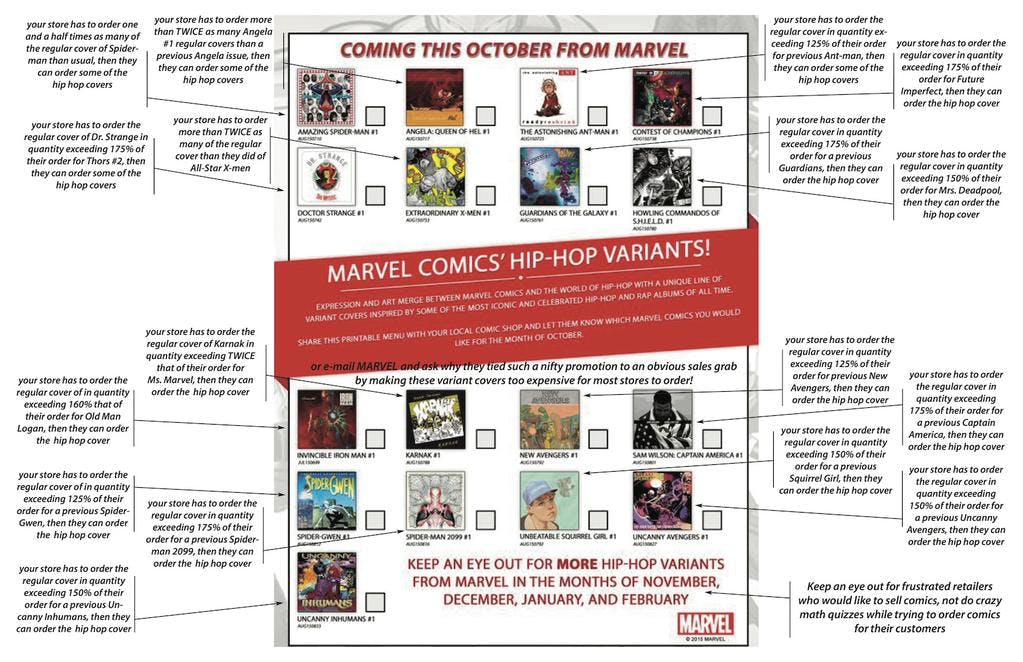 The chart shows reorder amounts of between 125–175 percent for every title listed.

“Keep an eye out for frustrated retailers who would like to sell comics, not do crazy math quizzes while trying to order comics for their customers,” the infograph reads.

While smaller stores on tight budgets might have trouble finding the extra money to reach the minimum order requirements for the variants, larger stores in well-trafficked urban areas are also looking at a numbers problem. The larger the standard order amount, the higher the bar will be to reach the minimum requirement for variants. The irony is that larger stories in metropolitan spaces are likely to serve the demographic of readers that Marvel was trying to reach with its All-New, All-Different hip-hop variants to begin with.

“If Marvel was serious about getting these covers into the hands of people who want them,” Seiler told us, “they need to make these 50/50 variants. For every copy a store orders, you can get that variant. DC Comics is currently doing that with their special monthly variants.”

The Daily Dot repeatedly contacted Marvel via phone and email for comment on this story, but did not get a response.

Seiler emphasized that he wasn’t opposed to the longstanding tradition of variant covers, but rather that Marvel’s marketing seems to imply that new fans will be able to walk into any comic shop and buy the variants, when that’s clearly not the case.

“No fan can afford to miss out when Marvel Comics stands alongside the hip-hop industry with covers celebrating some of the most iconic albums which have crafted the sound of a generation,” Marvel states in its hip-hop variant announcement.

“A couple [of] months ago, Marvel did this same thing with the Run the Jewels variant for Howard the Duck and Deadpool, and we had a good amount of people come in looking for it,” Seiler said. “We only got one of each and sold it for $100 because that’s what the going rate on it was. What person off the street is going to drop $100 on a comic?”

Given the distribution plan, it seems that serious collectors are the most likely to buy and enjoy the comics.

Beyond the problem of pricing, however, stands the issue of how the reluctance of brick-and-mortar retailers to purchase the variants will impact the reception of Marvel’s new and improved “diverse” lineup overall. Already Marvel has come under fire since launching its new lineup for marginalizing queer characters and shoving one bisexual character back into the closet. With rumors flying that DC is likewise cutting down on “Batgirling”—the injection of diverse representation and progressive themes into its series—many in the industry are growing frustrated. Comics Alliance reporter Janelle Asselin expressed her feelings about the problem of relying too heavily on the success of variant covers when the ultimate end cost may be inclusivity.

But for Seiler, his concern is what his customers in Fairbanks and its isolated outskirts will think of his business practices if he can’t offer them their fair share of access to the most in-demand comics of the season.

“When a customer can’t find what they’re looking for,” he said, “it makes the store look bad.”

H/T The Outhouse | Photo via bagogames/Flickr (CC BY SA 2.0)