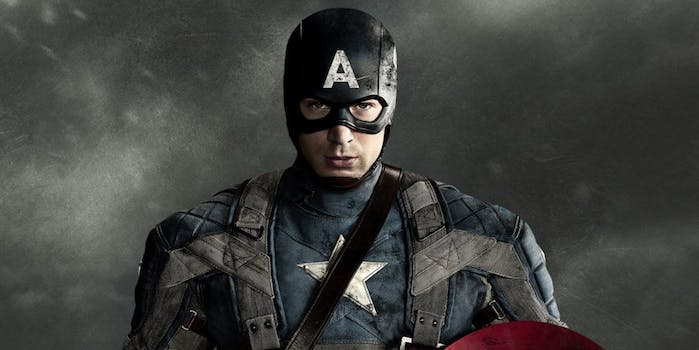 Why do ‘good guy’ superheroes get a bad rap?

“Captain America is only interesting if he’s a prick,” declared a recent article on Vulture.com, inspiring so many angry Marvel fan rebuttals that it probably qualified as outright click bait.

Of course, the idea of Captain America as “boring” has already been debunked by the $580 million his new movie just made at the box office. What we’re really talking about here isn’t Captain America as a character, but the way we react to blockbuster movie protagonists who aren’t morally ambiguous antiheroes.

In the 21st century, this kind of pure-hearted, optimistic hero is too often seen as childish and shallow, hence why so many people perceive Cap to be a stodgy do-gooder. The assumption is that in order to modernize an old-fashioned hero into a “serious” character, he needs to get darker. In other words, the infamous gritty reboot.

No matter how much time the Captain America films spend on real-world topics like PTSD and surveillance culture, in many people’s eyes they will never be truly respectable until the lead character starts acting like an asshole.

Christopher Nolan’s Dark Knight trilogy is the ultimate example of the gritty superhero reboot. By hiring a respected director of psychological thrillers, Warner Brothers made it very clear that they were steering clear of the cartoonishness that drove the Batman franchise into the ground with the widely derided Batman & Robin. But despite Nolan’s lack of affection for the cheesier aspects of the superhero genre, the Dark Knight trilogy is really no less comic book-ish than its more brightly colored counterparts.

Nolan’s Batmobile might be a military all-terrain vehicle instead of a sports car with fins, but that doesn’t make the Joker or the Scarecrow any more plausible as real-world villains. All three Dark Knight movies still require the same suspension of disbelief as any other movie about a guy who fights crime in an ankle-length cape and bat mask. However, with their storylines focusing on police corruption and urban terrorism, they were seen as being far more “serious” than other superhero movies, and therefore, they must be better. Critics agreed that finally, here were some superhero movies that non-geeky, non-frivolous adults could enjoy.

This false connection between gritty realism and literary quality is a common theme in the way we interpret popular fiction, but it’s particularly noticeable in the superhero genre, where “realism” is always going to be a matter of opinion.

Even Superman, a character who is literally powered by sunlight, is now far darker than before—with rather dubious results. In Man of Steel this is immediately established with his costume, which was toned down to duller shades of red and blue (presumably because serious superheroes don’t wear bright colors). This kind of visual cue goes hand in hand with storylines where heroes have to get closer to their more metaphorical dark side, which in Superman’s case manifested itself with him snapping his opponent’s neck during the film’s final showdown.

At the moment, this divide between gritty darkness and optimistic heroism coincides pretty neatly with the divide between the big-name DC and Marvel superhero adaptations.

Warner Brothers’ decision to go the Christopher Nolan route with Man of Steel made sense on a business level, since the Dark Knight trilogy was a huge box office success and managed to earn the respect of the most grudging of film critics. However, from a characterization standpoint, Nolanizing Superman couldn’t have been a worse idea.

The reason why Batman and Superman have remained popular for decades is because they don’t overlap. As complete opposites in theme and tone, they aren’t really competing. But Zack Snyder and Christopher Nolan wanted to make Superman a more mature and respectable hero, and they did it in the only way they knew how: by making him into a darker and more serious character, and therefore edging him dangerously close to territory that was already covered by the consistently violent and angst-ridden Batman.

Of course, the success of Captain America: The Winter Soldier has just proven that this strategy wasn’t really necessary. While Superman is often described as being an old-fashioned hero, Captain America was literally born during the Great Depression. Instead of rebooting him to be a more morally ambiguous character, Marvel kept him as wholesome, loyal, and old-school heroic as ever, and dropped him into a situation where he could lead a cast of 21st century characters who had spent too long in the shadows.

At the most basic level, a “dark” or “gritty” narrative is about putting the hero in a place where they have to make a difficult choice. In the recent Batman and Superman movies, that  “hard choice” has generally been to do something bad, which is then interpreted as being more mature and realistic because real life is about compromise. Meanwhile in Marvel Studios movies, the opposite is almost always the case.

Tony Stark realises the impact of being a weapons manufacturer, and faces up to the consequences. Thor only regains his powers after performing an act of pure self-sacrifice. Captain America spurs on a Snowden-esque leak that trusts the public to pass judgement on corruption within his own intelligence agency—the polar opposite of Bruce Wayne’s attitude toward civilians in The Dark Knight Rises, in which the citizens of Gotham are infantilized to the point of being completely helpless until Batman shows up to save the day. In fact, the surveillance system Bruce Wayne uses to search for criminals in Gotham City is not so very different from the one Captain America just destroyed in The Winter Soldier.

This Marvel/DC division is even more evident when you compare the final battle scenes in Avengers and Man of Steel. Both involve an alien attack on a U.S. city, but Superman and the Avengers react in very different ways. Superman spends 20 minutes beating Zod to a pulp and razing various skyscrapers in the process, culminating in the infamous scene where he snaps Zod’s neck. The Avengers, on the other hand, prioritize civilian survival above the ultimate goal of defeating Loki, with half the battle focusing on getting pedestrians to safety and restricting the battle to a few city blocks. Both scenes involve making a difficult moral and tactical choice in the heat of battle, but Superman goes for the “dark” option while the Avengers focus on minimizing civilian casualties. 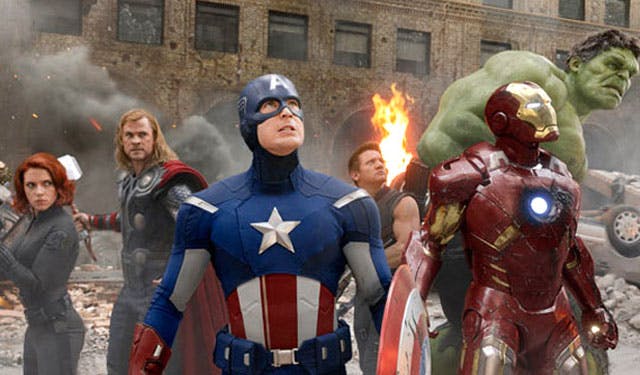 Somewhere along the line, someone decided that superheroes would only be popular with modern audiences if they were “cool.” Batman and Iron Man aren’t really an issue because they’re both basically James Bond: automatically cool. The problem is, Superman and Captain America are never going to be like that. They’re both total dorks.

Sure, the concept of Superman is awesome, but Clark Kent is the kind of person who makes dad jokes, helps little old ladies across the road, and unironically states that his favorite food is apple pie. The same goes for Steve Rogers. Their purpose isn’t to be John McClane or Jason Bourne, it’s to be inspirational heroes, in the original and most mythic sense of the word. And decades of bestselling comics suggest that there’s no need to mess with this winning formula.

In many ways, it’s possible to interpret Captain America: The Winter Soldier as Marvel’s F.U. to Man of Steel. There’s even a scene where Steve Rogers goes undercover in what looks suspiciously like Clark Kent’s glasses.

The movie actually begins with a scene that seems very much like Captain America by way of Christopher Nolan or Zack Snyder. Dressed in a somber, navy blue version of his usual costume, Cap leads a special ops unit on a mission to infiltrate a ship in the Indian Ocean, only to discover that one of his teammates has received another, secret set of orders. Moral ambiguity and “realistic” action thriller themes all round. But as the movie progresses, we see Cap purposefully transition away from this clandestine, shades-of-grey method of fighting the bad guys.

In a story where the biggest question is “Who can we trust?” this movie gives us the same answer time and time again: You can trust Captain America.

Winter Soldier’s final battle scene begins with Cap donning his old red, white, and blue costume so he can tell who his enemies really are (“The bad guys will be the ones shooting at us.”) and asking an army of government agents to abandon their posts because their commanding officers can’t be trusted. He puts his trust in everyday citizens to make the right choices for themselves and their country, and help him fight back against the evil that has grown in their midst.

In an indirect mirror image of Superman’s decision to kill Zod in Man of Steel, Captain America’s final battle ends with him refusing to kill the Winter Soldier, and resigning himself to death. Both are written as traumatizing events with great emotional and moral impact, but from a heroic character development perspective, they put Superman and Captain America in very different camps.

Steve Rogers and Clark Kent aren’t direct analogues for one another, but they do have one fundamental thing in common: they are good. They are both incredibly wholesome and moral, above all other things. Even Spider-Man is “darker” than Superman, because his origin story centers around Peter Parker’s guilt over failing to save his uncle’s life. Interestingly, Man of Steel inserted a similar backstory scene for Jonathan Kent, a classic manpain moment that seemed oddly unnecessary considering the fact that Clark had already been orphaned once already.

The first rule of storytelling is that you always need to include some kind of conflict to keep things interesting. The rationale behind a gritty reboot of Superman is that there’s just not enough conflict in a story about someone who spends the whole time being a good person. However, this mistakes “good person” for “flawless character.”

Yes, a flawless character who wins all the time is an incredibly dull story, but neither Steve Rogers nor Clark Kent can be possibly be described as flawless. Not just that, but like any other superhero who has stood the test of time, both of their backstories are riddled with grief, violence, and trauma. There’s really no need to insert additional “darkness” into the characters themselves, when it already permeates the rest of their universe.

The purpose of characters like Superman and Captain America is not to succumb to that darkness and join the ever-growing horde of rage-fuelled Hollywood antiheroes, but to shine a light of hope in that darkness, and inspire others to do the same.