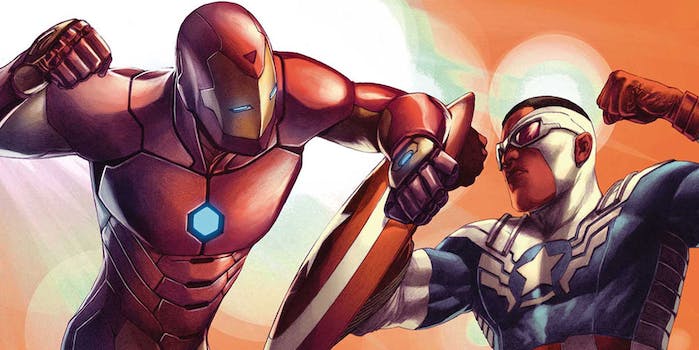 Every few months, Marvel‘s top writers and editors gather to plan the future of the Marvel Comics universe. The closed-door summits unite Marvel’s creative masterminds and result in everything from major character deaths to crossover events like Secret Wars.

The latest creative retreat took place this weekend, and the New York Daily News got an exclusive look at Marvel’s next big event storyline: Civil War II, which will begin this summer.

The original Civil War storyline rocked the Marvel universe in 2006 and 2007, with Captain America and Iron Man leading two opposing sides in a battle over a Superhero Registration Act. This arc was adapted for the upcoming movie Captain America: Civil War, and will be mirrored in Civil War II, when a conflict will arise over a Minority Report-esque scenario with a new character who can predict future crimes. The official synopsis reads:

“A mysterious new Marvel character comes to the attention of the world, one who has the power to calculate the outcome of future events with a high degree of accuracy. This predictive power divides the Marvel heroes on how best to capitalize on this aggregated information, with Captain Marvel leading the charge to profile future crimes and attacks before they occur, and Iron Man adopting the position that the punishment cannot come before the crime.”

The most exciting surprise here is the prominent role for Carol Danvers, who gained a cult following after her relaunch as Captain Marvel in 2012. The first promotional image from Civil War II showed Iron Man going up against Sam Wilson (Captain America), but it makes sense for Captain Marvel to have a more prominent role, since the character will soon be getting her own solo movie.

In recent years, Marvel’s editorial retreats have come under more and more scrutiny. As the origin points of Marvel’s most influential storylines, the retreats are obviously of huge interest to fans. However, almost as much attention is paid to who gets to be in the room where it happens.

In 2014, many fans were relieved to see Ms. Marvel writer G. Willow Wilson and editor Sana Amanat join the group, the previously all-male membership of which was often explained as Marvel only inviting writers with an exclusive contract. (Of course, the earlier presence of writers like Kieron Gillen, and this year Ta-Nehisi Coates, made it fairly obvious that this was not the case.)

This year, the Daily News gave fans a glimpse into the inner workings of the summit, including the sometimes messy atmosphere of a writer’s room in progress. During one discussion about which character to kill in Civil War II, writer James Robinson suggested that the character should commit suicide, drawing attention to the dangers of cyberbullying—an idea that sounds like it could easily be an embarrassing misfire and which was quickly shot down by another writer.

It’s highly unlikely that the Daily News story includes any real spoilers for Civil War II, although we can possibly deduce one hero with a major part to play: Black Panther. Writer Ta-Nehisi Coates will launch the character’s new solo comic with artist Brian Stelfreeze in April, and his presence at the retreat implies that both he and Black Panther will be influential figures in Civil War II.

Correction: The Black Panther comic will launch in April.