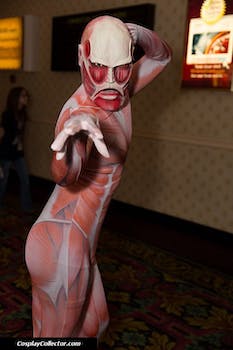 This is not a drill: Marvel writer teases ‘Attack on Titan’ crossover

The titans have broken through the Rose Wall… and they’re coming for your superheroes.

Marvel comics writer C.B. Cebulski just took to Twitter to announce what may be the most jawdropping not-actually-a-fanfic crossover ever: Later this month Marvel is doing a special crossover with the Japanese mega-hit Attack on Titan.

If you ever wondered, “What if the titans from Hajime Isayama’s “Attack on Titan” attacked the Marvel universe?”, you’ll find out soon!!

The bestselling manga turned hit anime series is probably best summed up as intense. With a fictional locale based on 19th-century Europe as its setting, it’s hard to see what this slightly steampunk action/horror series could have to do with, well, anything in the Marvel universe.

But Cebulski’s teaser makes it a bit clearer:

Not a joke, folks. Attack on Titan and the @Marvel universe are crossing over! In 2 weeks. In Japan. Want a teaser? pic.twitter.com/9AF5fqWLfX

Is that Spider-Man fighting Titans? Yes, yes it is.

This actually makes a lot of sense. In the world of Attack on Titan, the human soldiers trying to protect their homeland from giant invaders have developed special rope-based technology to propel themselves through the air from one anchor point to another. It’s virtually identical to Spider-Man’s web-slinging abilities, making it easy to imagine Spidey single-handedly taking on a Titan or two, or battling them alongside the Survey Corps.

From the looks of the comic, it seems Marvel will be borrowing the Titans from creator Hajime Isayama and pulling them out of their original setting into the modern world. This means we probably won’t get a crossover involving our hero Eren Jaeger fighting crime next to Spider-Man. But it’ll still be cool to see the Titans interacting with modern superheroes.

And if the Titans are officially part of Marvel’s world now, does that mean there’s technically a universe where all the characters from Disney’s Kingdom Hearts live alongside Marvel superheroes, Star Wars Jedis, and Attack on Titan’s terrifying humanoid monster-machines who swallow people whole?