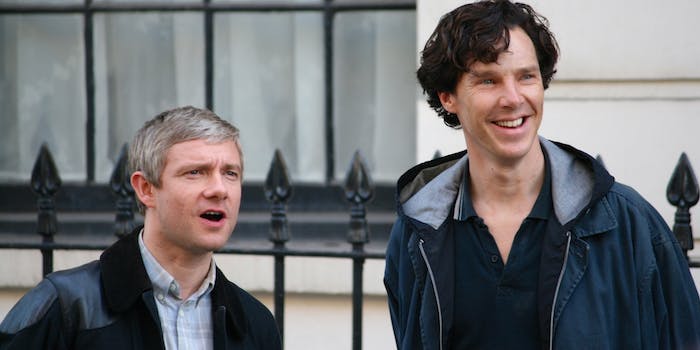 Martin Freeman says fans would be disappointed if 'Sherlock' aired more episodes. Are you sure about that?

According to Sherlock star Martin Freeman, fans would be disappointed if the show aired more episodes per year. Seriously?

“By American standards it’s nothing!” Freeman said in a recent interview with The Independent. “Even by Downton [Abbey] standards it’s pretty short! It’s not eight months of our year, and it’s not every year. It’s so intermittent. That’s what for me makes it do-able. I don’t know about Ben but certainly for me it would soon lose a lot of its appeal if we were schlepping that around for eight months of the year, every year. A bit of the sheen would have gone off it.”

For the record, Sherlock has produced nine episodes in four and a half years, which is part of the reason why so many fans are desperate to break onto the show’s sets in search of spoilers.

Freeman is usually upbeat about the prospect of filming new seasons of Sherlock for years to come, but it sounds like those regular #Setlock invasions are starting to grate. When they’re filming at public outdoor locations, the actors have to deal with “hundreds of people taking pictures of you and holding up placards” and applauding loudly at the end of every take.

When it comes to filming more episodes, Freeman is probably right. Sherlock is less like a traditional TV show and more like a series of movies, and producing more episodes would lead to lower production values and sloppier writing. Not that longer seasons could ever happen anyway—Cumberbatch and Freeman are both so busy with other projects.

There’s also the fact that Sherlock fandom might never have developed into the behemoth it is today were it not for the lengthy gaps between new episodes. You could argue that waiting for the next season is an essential—if agonizing—part of being a Sherlock fan.

Photo via Saschaporsche/Wikimedia (CC BY 3.0)