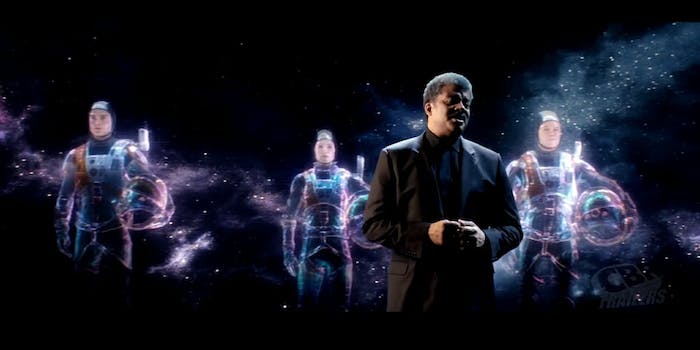 The video gives us a glimpse at one of the coolest aspects of the film.

We may not live long enough to see an earthling set foot on Mars, but Neil DeGrasse Tyson’s new viral video for The Martian is almost enough to make us feel like the future is now.

The video, released by Comic Book Resources earlier today (and then was taken down for several hours due to what seemed to be a copyright snafu; it’s back now). The first video introduced us to the astronauts of the Ares 3 mission—a Mars-bound space expedition set an unknown number of decades into the future. (In the film’s universe, humans reached Mars in 2029.)

This time, courtesy of Tyson and his popular show StarTalk, we’re introduced to the ins and outs of the expedition itself.  We also glimpse some of the stunning visuals we can expect from the film:

The video is a gift to fans of the book the film is based on, allowing us to see concepts that were only geeky hypotheticals in Andy Weir’s bestselling novel—like what the spaceship Hermes and the station on Mars actually look like.

The ins and outs of actually getting to Mars, as discussed in the clip, may not seem particularly relevant at first. It’s a 144,000 mile-long trip involving two separate legs of the journey and over a year of space travel. But this topic becomes very important to the film once Matt Damon’s character Mark Watney is accidentally stranded there.

The full video also shows Tyson cheekily discussing what future episodes of StarTalk might look like thanks to our Mars expeditions.

As this latest addition to the film’s media illustrates, The Martian‘s scientific thought experiment is so well mapped out that we can almost imagine we might actually get to see those episodes ourselves one day.