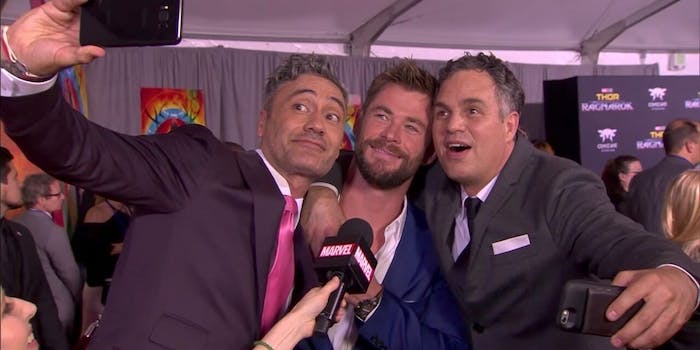 Marvel’s widespread efforts to clamp down on plot details or spoilers getting out before upcoming movies are notorious. For instance, Marvel actors are vague in interviews and “Marvel snipers” supposedly positioned to take out those who say too much are a running joke. (Or are they?) But what happens when the leaks are coming from the inside?

In the case of Mark Ruffalo, who stars in Thor: Ragnarok, it looks to have been a complete accident. He livestreamed parts of the Thor: Ragnarok red carpet premiere in Los Angeles on Tuesday night for his fans on Instagram Stories. That included a moment before the screening where Jeff Goldblum’s character the Grand Master announced the cast on stage, according to the Hollywood Reporter. However, it appeared that Ruffalo forgot to turned off Instagram Stories, because soon after around 2,500 fans were treated to audio of the first several minutes of the movie.

While many fans were overjoyed to get a preview snippet, they knew Ruffalo didn’t mean to actually treat them to the movie. So they struggled with how to tell Ruffalo that he was still streaming while he was watching Thor: Ragnarok.

OMG Mark Ruffalo forgot to turn off his instagram live video at the Thor: Ragnarok premiere and 2000 people are listening in his pocket pic.twitter.com/dyW0ARe973

He soon realized what was happening—or someone told him he was livestreaming the audio—and showed his face in the dark theater to those watching.

Marvel fans know about the level of security surrounding these movies, so some of them were worried about Ruffalo’s job with Marvel.

Ruffalo is set to appear in Avengers: Infinity Wars, so we hope he just gets off with a warning.