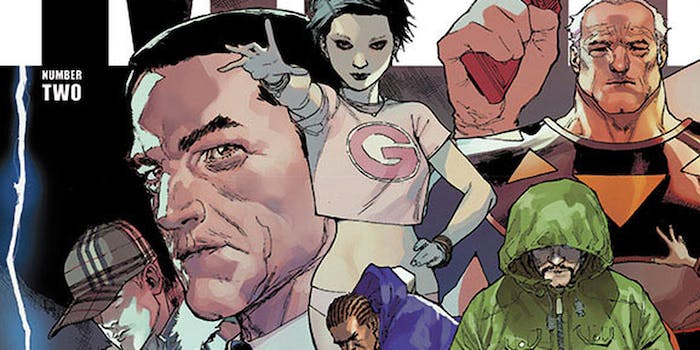 Mark Millar has given America's modern underdogs the superpowers they desperately need.

Mark Millar is sending copies of his latest graphic novel to every senator in Washington, D.C.

The creator of Kick-Ass and Wanted is one of the biggest names in superhero comics, having written numerous titles for DC, Marvel, and his own comicbook universe.

His latest original series, MPH, is set in Detroit. It follows the lives of four teenagers who gain superpowers from a street drug, and decide to take on the bankers and politicians who destroyed their city. They’re comic book heroes for the Occupy generation, coming up against villains who aren’t super-powered so much as super-rich.

In an article in the Spectator, Milllar explained why this type of book was important, and why he decided to send it out to politicians across the U.S.

Superman, he points out, came out of the Great Depression, simultaneously an escapist fantasy and a working-class everyman hero. MPH is intended to revitalize this concept for modern audiences, and was inspired by a visit to Detroit. “Driving through the middle of Brightmoor was like being on the set of I Am Legend or The Walking Dead,” writes Millar. “How could the richest country in the world allow so many of its people to live in such abject poverty? Where were all those superheroes now?”

MPH explores what a modern-day underdog might do if they suddenly found themselves with superpowers. Is masked vigilantism really what a normal person would choose in the 21st century, or is it more realistic to show those four Detroit teenagers using their powers to break the law in order to help the poor?

“After years of writing more conventional, big-budget heroes like Superman or Spider-Man it felt amazing to dip my pen in some real world ink and have my super-people take down all the people who outsourced a city and left it to rot. I also wanted to write a big superhero comic with a mixed-race cast because in a decade when the biggest golfer, the biggest movie-star, the biggest racing-driver, the richest pop-star, the richest television executive and even the president himself were all people of color, superheroes still looked very suspiciously like a white-boys club.”

This is an issue that many of the big-name superhero franchises are beginning to struggle with. Comics may not be selling as well as they did back in the 1940s, but superhero movies are a booming industry, and Hollywood seems determined to recreate characters like Superman and Spider-Man as if they are just as relevant now as they were back in the day.

The problem is, while a character like Spider-Man is watchable, he’s still a straight, white male science genius with extra superpowers. Hardly an underdog hero. Characters created in the 1930s and 1960s are hardly representative of the audience who consume superhero fiction today.

At its heart, MPH is inspired by all the most successful tropes of the superhero genre. It just updates them, with the intention of being the same kind of inspirational and empowering force Superman was to readers back in the mid-20th century.

“It’s important to keep the story of Detroit and all the other forgotten tragedies in America’s march forward very much in the public consciousness,” Millar explains. “What better manner to catch your eye than via one of these big, crazy, Hollywood franchises nobody can escape from at the moment?”

So, a copy of the first issue of the comic will be sent to President Obama and every senator in D.C. And since Millar has already sold the film rights, they’ll be doing the same thing with copies of the movie when it comes out in a few years’ time.