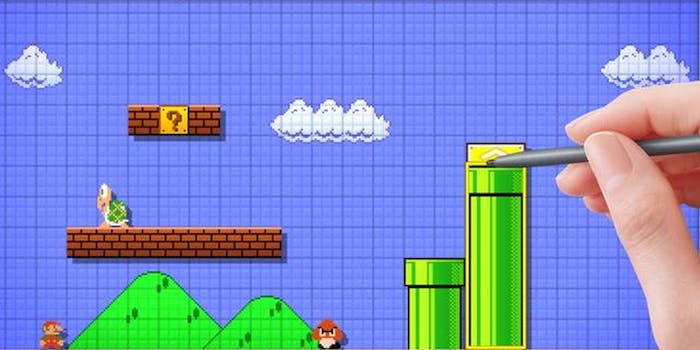 Draw yourself into the game.

Nintendo had quite a few games to show off this E3, but most surprising was the tentatively titled Mario Maker. It’s an incredibly simple concept: The game gives players easy-to-use tools, and allows them to make new levels and dictate classic 2D Mario.

We got a bit of hands-on time with the game. It was surprisingly easy to set up blocks, moving platforms, and enemies. Once the game goes live, it will be interesting to see how the Internet takes the game and makes it their own.

As of now, the only way to stream Let’s Play videos through the Wii U is through a capture card. Nintendo has yet to announce any Twitch on YouTube support of the game. Last month’s release of Mario Kart 8 marked the first time the company integrated online streaming support. Players could upload replay videos of their Mario Kart runs to YouTube. With the built-in camera on the Wii U Gamepad, it would be tremendously easy for players to upload their own commentary over some creator-curated Mario levels.

Last month, Nintendo also detailed its plan to split advertising revenues with YouTube content creators. It was a move in the right direction and maybe a sign of things to come.

A cool addition is the ability to play the game in different Mario art styles. Right now it only offers the classic 8-bit style or the more contemporary New Super Mario Bros. U style. Nintendo still has time to possibly introduce art styles from the Super Nintendo iterations of the series.

Mario Maker is slated to come out later this year.