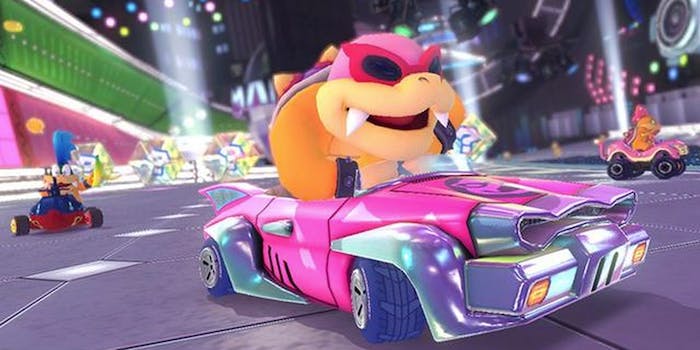 Wii U users are getting attached.

Nintendo recently released its sales figures and had good news for investors. The company finally hit a bit of profitability after a dismal few years, thanks to some tentpole games like Mario Kart 8.

Since its release earlier this summer, Mario Kart 8 pushed 3.49 million units worldwide. With 7.29 million Wii U units out in the wild, that’s just a little bit shy of half.

Nintendo president and CEO Satoru Iwata must have been relieved. It’s been quite a difficult year for him and the company. The Wii U did not sell as well as predicted, so Nintendo had to reign in its sales expectations. Iwata also underwent surgery after doctors found a tumor earlier this year. Luckily, he had a successful operation and is now back at Nintendo full time.

Although the first half of the year for Nintendo wasn’t incredible, with the holiday season approaching, the company is pulling out the big guns. Bayonetta 2 released late last month to near unanimous praise, and it sold rather well, at least in the U.K. Smash Bros. for 3DS has already pushed more than 3 million units. Nintendo plans to up the ante by releasing Smash Bros. for Wii U later this month. The hype surrounding that game is so large that Amazon has stopped taking pre-orders for the premium bundle.

Nintendo has shifted its focus from the casual Wii audience and has doubled down on the hardcore with the Wii U. It may not be paying off sales- wise, as it did with the Wii, but at least the hardcore audience is much more predictable, and will stay with Nintendo no matter what.