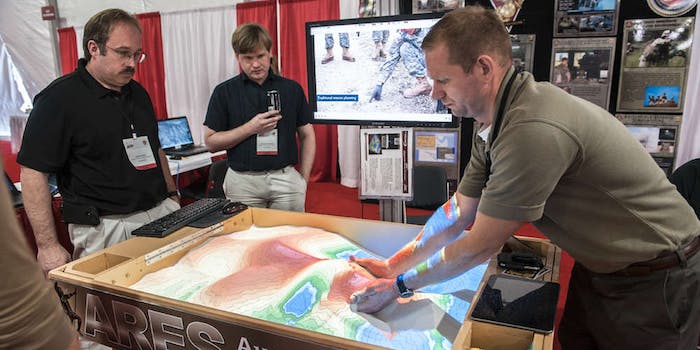 The Kinect might not be great for gaming. But it's got a whole lot of other uses.

Microsoft’s Kinect motion-sensing camera is virtually useless for its intended purpose: gaming. But it has been hacked in all sorts of interesting ways, and now the US military has come up with another one.

Prior to the deployment of forces in a theater of operations, military commanders might reproduce scale representations of the terrain in which they’ll be operating. A three-dimensional sandbox in particular allows officers to visualize the environment, and orient them to the larger picture of the battle plan, i.e. what will be taking place around their individual units during the fight.

Normally these sandboxes need to be constructed and laid out as needed. The Augmented Reality Sand Table would cut down on that preparation time by literally allowing users to sculpt the terrain with their hands. When used in conjunction with Google maps, the AR Sand Table could allow commanders to shape real world terrain and depict it accurately in three dimensions.

According to Marine Corp Times, this technology could help cut through language barriers during training operations with “third party nationals,” and allow for the construction of sandbox planning maps that could be projected in huge spaces, like gymnasiums, to plan large-scale operations.

It could also be adapted to provide mobile versions that take advantage of smartphone projectors. Such a technology would ostensibly be of use to officers in the field who want to hold impromptu briefings as battle conditions change.