This passionate Star Wars fan is making waves in the fandom with news, rumors, and spoilers.

If you’re eagerly soaking up news about Star Wars: The Force Awakens then you’ve probably heard of the website Making Star Wars.

Launched in August 2012, Making Star Wars has made a name for itself not just as a place to find interesting discussions about the franchise, but as a place to find rumors and spoilers shared by inside sources about the upcoming films. These scoops have been cited by publications like the International Business Times, The Daily Beast, The Telegraph, and more. But who exactly is digging up all this insider information about Star Wars?

That would be Jason Ward, owner and editor-in-chief of Making Star Wars. Ward is a longtime Star Wars fan who’s been involved in the fandom for years. He runs the website with a team of fellow fans including his wife Amanda, who is the site’s administrator. The enthusiasm and passion Ward has for the saga comes across clearly when you talk to him, whether it’s discussing Star Wars being a part of one of his earliest memories or dishing on the new film. He says he’s most excited to see Han Solo return, what he and Chewbacca have been up to after all these years, and the Millennium Falcon in a new adventure.

“I’ve dreamt of that since probably 1984 when I went down to the public library with my first library card and got The Art of Return of the Jedi and on the back of it it had a poster for Revenge of the Jedi, which as a little kid I didn’t know was an alternate title to the film. I thought Revenge of the Jedi was going to be the next Star Wars movie coming out,” Ward told the Daily Dot. “Right then I started thinking ‘the Millennium Falcon’s going to be back!’ and strangely enough I was like ‘what’s going to happen with that radar dish?’ Because Lando got it knocked off in the movie. Lando destroyed part of the Falcon and so when I saw the new Falcon and it has that new radar dish in episode 7, I was like ‘there it is! It’s finally happening!'” 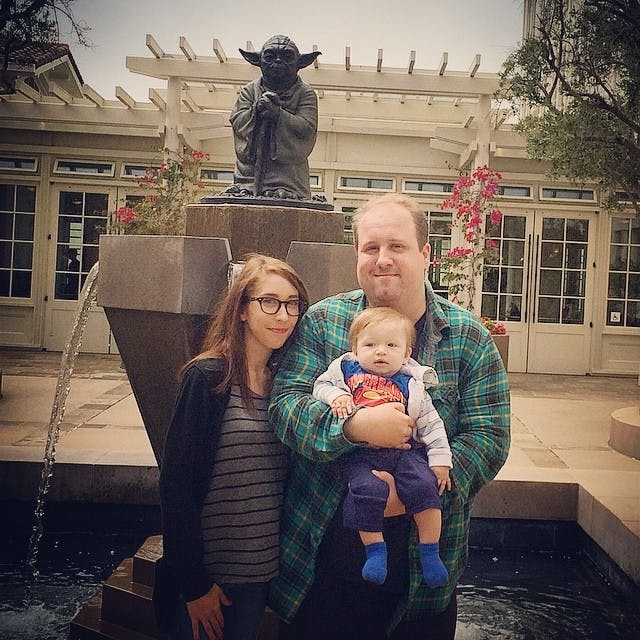 Ward with his wife Amanda and son Luke.

While the website posts a lot of Star Wars news and features, it has become known for its rumors and spoilers. Ward said when he sees those picked up by other websites and news publications, his heart sinks.

“My intended audience are those seven people that I hang out with on Twitter or whatever, you know? That’s the way I’m looking at it. When I see something like that pop up somewhere else I kind of sink down in my chair like ‘Oh no, what’s going on? How did that get there?’ And it’s strangely stressful because it’s not the intention,” he explained.

Seeing how quickly those types of posts spread doesn’t make him hesitate to share, but it does make him worry about how he’s presenting the information.

“It makes me afraid that if I don’t write too many disclaimers and if I don’t really make sure every single thing in it is accurately portrayed as, ‘Well, to the best of my ability, from what sources have told me, and what I’ve seen,’ that makes me really, really nervous,” he said. “As time has gone on, I usually just kind of jumped head first in, ‘Here’s what we just heard,’ and now I’m sometimes writing two or three paragraphs before we really get to the story and I’m like, ‘I don’t know if this is the way to do this but hopefully people are actually reading and not just jumping ahead,’ which is what some people on message boards do.”

Some people may not mind what Making Star Wars shares, but others do. Ward said he tries to keep spoilers out of headlines and encourages people not to say anything openly on Twitter out of deference to fans who don’t want to see spoilers. He respects their different approach to the fandom and feels bad if anything is ever spoiled for them. Ward has had some fans get extremely angry at him for what he posts. According to Ward, one guy in particular is enraged that someone would leak information from the film productions and wants him to reveal his sources. When it comes to Ward’s sources though, he said a lot of the time he doesn’t know the person’s official title on the production.

“I just know that if you show me a bunch of pictures and they’re real, I take most of what you say very seriously,” he said. 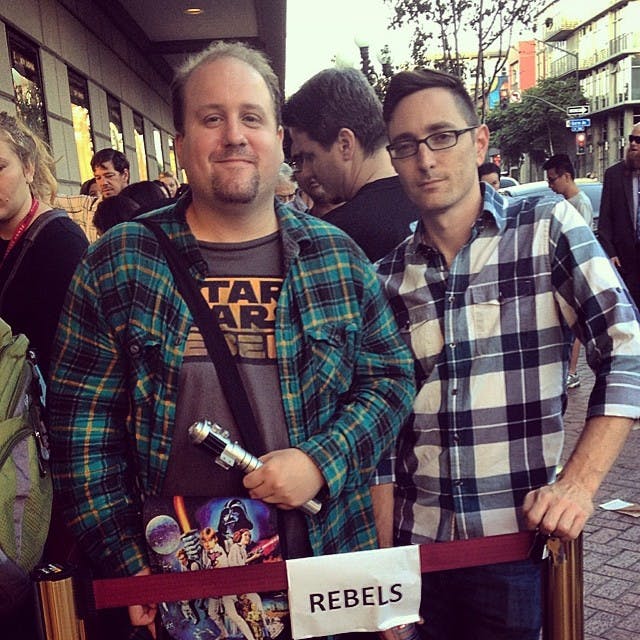 Ward with Randy Lo Gudice, his partner on the podcast “Now, This is Podcasting.”

He said he’s often able to weed out fake information, but he thinks it’s fair for people to question his reading of the sources. For example, he said how he interprets a piece of concept art could be very different from how someone else interprets it.

“I’m totally cool with that. The whole thing about my stuff with concept art that has leaked though is so far I think now I’ve seen about 600 different pieces. So when I see 600 pieces I start to go, ‘OK, there’s a common theme here that relates to the actual story.’ And then when we got other documents and other people started sharing other stuff with us from the production we started to be able to put the movie together basically,” he said. “So I understand why people would challenge our sources. We’ve been wrong, we’ve had sources who have been wrong, but in the end we usually keep digging until we hit gold so to speak, we usually get it right eventually. We’re not journalists, I was an ethnographer and that’s as close to journalism as I’ve ever been and that’s a lot different in my opinion.”

As we get closer to the release of new Star Wars movies, Ward hopes there will be an easing in the level of secrecy surrounding the films. Then, discussions among fans don’t have to depend on trailer morsels and spoilers, but can focus on what’s being officially released.

“That’s my hope for Making Star Wars, is that we’re not only about spoilers because I’m about the making of the film. I care about the production of it, how things evolve, what sequences were cut and why and how they changed, that’s my angle. But right now in this era it seems like I’m just a spoiler because nothing is going on and there’s no changes to talk about other than spoiler stuff,” he said.

What exactly the future holds for Star Wars fans remains to be seen. Discussions may continue to rely on leaks, or the films may become more open after The Force Awakens premieres in December. Either way, Making Star Wars will continue to be a resource for fans, offering a glimpse of how these beloved films are made and commenting on what’s going on in the galaxy far, far away.