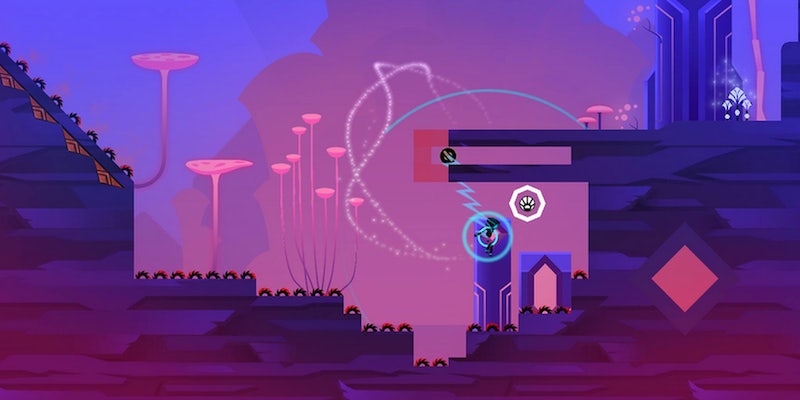 Magnetic by Nature’s simplicity captures the force of fun

Crowdfunding made this inventive game possible.

Sometimes it’s the simplest of mechanics that make the most inventive and addictive games.

Games like Super Meat Boy and N+ come to mind when playing Magnetic by Nature for the OUYA. While the primary focus of those games is running and jumping, their superb level design and incredibly tight mechanics allowed them to shine.

In Magnetic by Nature you play as a little Robot who’s trying to collect energy to resurrect his much larger robot friends. Each level you beat gets you a bit more energy to revive a fallen buddy. The only power at your disposal is the ability to control the magnetism that emanates from your body. You can either glow blue or red, representing the properties of attraction and repulsion.

Levels are littered with magnetic orbs and pads. You must activate your magnetism to launch yourself around levels.

If the concept sounds incredibly simple, that’s because it really is. After playing and feeling how tight and concrete the physics are, you can tell how much time was dedicated to getting the feel of magnets just right.

If you recall your high school physics class, magnets have wave like properties. A magnetic ball is strongest in the center and gets weaker further out. Remember trying to push two very strong like-charged magnets together? It wasn’t easy. Those two magnets try to fly off into different directions. It’s that simple core idea that really makes up the bulk of Magnetic by Nature’s physics.

Physics are never easy to emulate and code for, but Magnetic by Nature gets it down. You can fall toward a red magnetic pad, which represents repulsion, and make yourself turn red as well. Doing so will create two like charges, and since like charges repel, it’ll fling you upward. It’s all incredibly intuitive and feels right.

The angle at which you approach a magnetic ball makes all the difference. Misjudging the angle can send you careening off in a different than desired direction.

Unlike Super Meat Boy or N+, Magnetic by Nature is a slower game in pace. Your character is rather floaty, which makes sense. If you had too fast of a fall, the game’s physics would work as well. Your arms pinwheel as you try to maintain control in the air while swinging from one magnet to the next. It’s a cute effect that gives the little robot a lot of character.

The game also begs for speedrunning. Each level is short, and with the right skills can be completed quickly. The game counts how long you take to beat each level and ranks you against other players. It forces you to try and land the best time possible. The clock never stops though, even if you die. It’s about getting to the end of the level as fast as you can no matter what.

Difficulty all comes down to level design. Much like in Super Meat Boy, there are hazards like spinning saw blades and flowing rivers of sludge. There’s a clear curve in difficulty. The earlier levels are much easier and will take only a few seconds to beat. Later on levels require more thought and tries.

There are also extra tokens that you can get in each level. The tokens are completely voluntary, but add an extra layer of challenge. Overall the game doesn’t get as stupidly difficult as Super Meat Boy, but it does have its fair share of challenge. This could be seen as a good thing. Gamers are less likely to give up, as many did with Super Meat Boy.

The art deco style of the game is beautiful. Backgrounds illuminate, but also have this post-apocalyptic feel to them. It really does feel like humans have been gone a long time. It doesn’t look like Robots had been doing much terraforming either. Nature has clearly reclaimed the territory.

As far as music goes, each area has a different theme, like a metropolis or nature. Each area has 25 levels. As you progress through each level, the music evolves and becomes more and more grand. The music was never tiresome, and you could get a few of these songs stuck in your head. The music sets the tone for the game incredibly well. Since it’s a much slower game, sounds are much more ambient versus the more pop-like chiptune from Mario or Sonic. The best way to play is to get a recliner, sit back, and just get lost.

With a game this beautiful and with gameplay so tight, it’s unfortunate that the overall experience is hindered by hiccups. The game can never maintain a solid framerate on OUYA. This can be troublesome with a game that demands so much precision. Having framerate drop can cause you to fail a level. For the most part the game runs well, but when compared to the smoothness of similar games like Super Meat Boy, there’s no contest.

Magnetic by Nature is definitely a must-play game. It breathes new life to the platforming genre with its magnet-inspired physics. It satiates this itch that many gamers have to run and jump with absolute precision. The art is gorgeous and the music delights at a sensory level. It’s unfortunate that the game suffers from framerate drops, but hopefully developer TripleSlash Studios can release a patch to better optimize it for OUYA. The game will be released for PC and Mac release later this year.