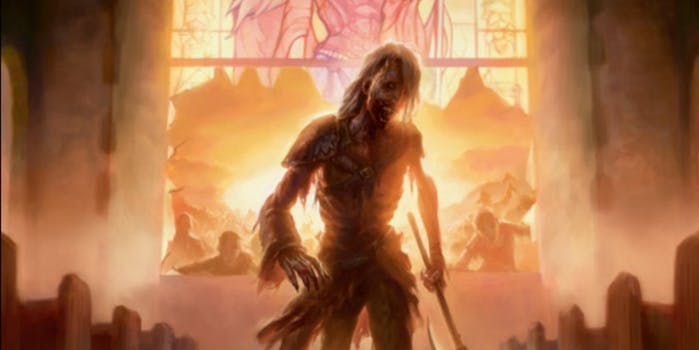 The dead are relentless in Magic: the Gathering’s newest expansion, Shadows over Innistrad

We talked to designer Gavin Verhey—and got an exclusive preview of a game-changing new card!

Warning: This story contains spoilers for Shadows over Innistrad.

Hordes of the living dead roam freely throughout the world while other terrifying monsters hunt the few remaining humans. It may seem like a scene straight out of the zombie apocalypse—and that’s exactly the point for Magic: the Gathering’s newest, horror-themed expansion, Shadows over Innistrad.

Shadows sees a return to the frightening plane of Innistrad, and along with it, the return of fan-favorite vampires, zombies, werewolves, spirits, monsters, and the humans that serve mainly as prey.  We’ve got an early, exclusive look (spoiler!) at one of those zombies—the unstoppable Relentless Dead. The storyline is getting an update, too. Innistrad’s strongest champion, the archangel Avacyn, has lost her sense of justice and is unleashing her angelic hordes upon the townsfolk of the plane.

The planeswalker Jace must team up with new friends and old enemies, including the necromancer Liliana, to find out how to restore the balance, even if it means facing off against more powerful foes than even last expansion’s Lovecraftian Eldrazi.

Want to know more? Check out this exclusive full-page spread from the upcoming art book, The Art of Magic: the Gathering – Innistrad, set to release this summer. (Click here for a larger version of the image.) Opposing Jace and his planeswalker buddies, however, will be the horrifying monsters of Innistrad. Among them, zombies stand out as one of the most iconic.

Zombies in the original Innistrad were a terrifying blend of undead monsters and rampaging experiments. Whether they came from a graveyard or laboratory, one thing was clear—zombies meant trouble. Armed with the Undying mechanic, which lets creatures come back from the dead with even more power than before, zombies were used often in many decks to wreck havoc upon opponents. 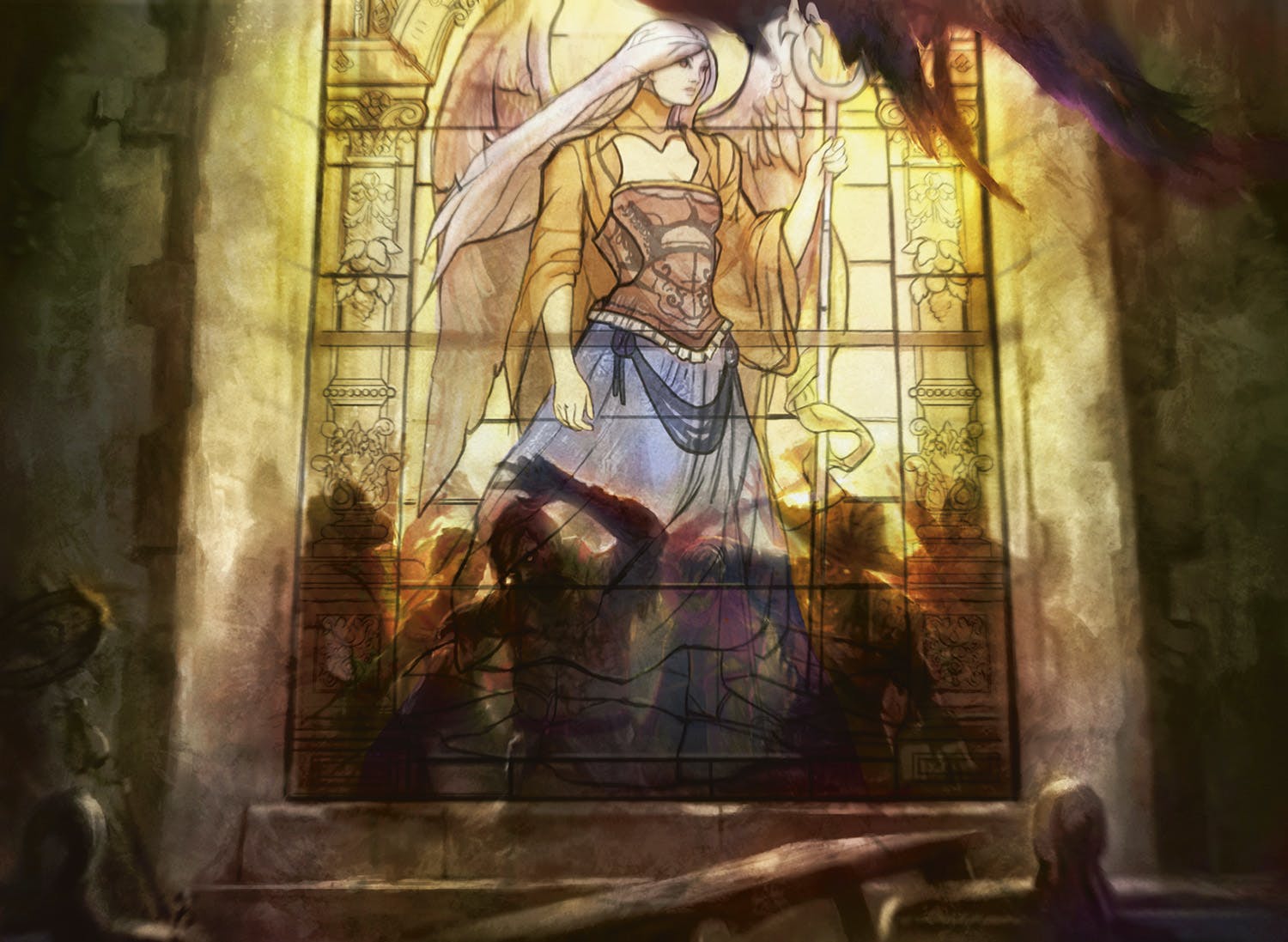 Endless Ranks of the Dead

One of the most notorious cards from the original expansion was Endless Ranks of the Dead, which created an endless supply of zombie tokens for its owner. There was, however, one small catch that kept the card from taking off. To use it, players already needed zombies on the battlefield. The card was especially vulnerable to a board wipe, in which a player would kill off all creatures, which effectively ended any zombie steamroll.

In Shadows over Innistrad, however, one zombie is here to fix that travesty. Relentless Dead, below in full, is an unstoppable zombie threat that can easily return to its owner’s hand, no matter how many times you try to kill it. It also has menace, which makes it harder to block and gives it some offensive upside. But that’s far from all it can do. Relentless Dead’s second ability, which brings back other zombies directly to the battlefield, is a game changer. Whenever this guy dies, players can bring back any other zombie, without even needing colored mana. This ability promises lots of highlight moments for Relentless Dead and his undead buddies to flip the tables in any matchup.

Relentless Dead’s strength is giving players hope for a dedicated zombie-themed deck in the upcoming competitive Standard-format season. More importantly, it may even signal a power boost to the less-competitive Zombie tribal deck in non-rotating formats like Modern or in Commander. Combined with similarly low-costed zombies like Gravecrawler, Relentless Dead could be the perfect enabler of a high-speed, board-wipe-proof aggro deck.

To find out more about the zombie horde of Innistrad, we sat down with Gavin Verhey, one of the core game designers for Magic: the Gathering.

Thanks for the time, Gavin. So, we’re back to Innistrad. Where do zombies fit into the overall lore and story?

When we came to Innistrad the first time around back in 2011, we knew we wanted to make it a gothic horror setting—and that meant monsters! Looking at all of stories and pop culture, a few monster races stood out—and zombies were top among them, alongside races like werewolves, vampires, and spirits. They are an integral part of the world. It wouldn’t be Innistrad without zombies!

About half of Innistrad’s zombies—most of the ones aligned with the color black—are more of the lumbering variety that are out and hungry for brains. Fortunately, the widespread paranoia and panic on Innistrad right now provides plenty of tasty prey. The other half—the zombies aligned with the color blue—are more of the stitched together variety, as Innistrad’s stichers (think: Frankenstein) are becoming more and more creative with their zombie inventions.

You’ll have to wait and see exactly how it all plays out. But I can say this: If you like zombies, you’re going to be pleased.

What design mechanics are unique to the zombies?

Something we work really hard on Magic is what we call “top-down design,” which is when we start with an evocative concept of a creature or spell and then build a card around it. These often lead to the best designed cards, because the card’s mechanics feel exactly like what you would expect that card to do.

In the case of zombies, we quickly identified the key element of them: returning from the dead! So while a lot of Shadows over Innistrad deals with the graveyard, Zombies are the monster race that have to do with getting out of the graveyard—often over and over again. For example, take a look at the card Relentless Dead. This zombie can come back from the graveyard time and time again, and really bring that sense of the endless army of Zombies along with it! You just can’t keep a good zombie down.

How popular are zombies among players?

Zombies are extremely popular among players! Among their many advantages, they have two huge elements going for them.

For one, they have the advantage of having such a deep well of pop culture around them. There are so many books, shows, and movies about zombies that surely you’ve seen one at some point—and we definitely put all kinds of zombies in our game to play off those tropes you know so well. From the zombie wielding a butcher knife like in original Innistrad’s Abattoir Ghoul, to the stitched-together Frankenstein-esque horror of something like Geralf’s Masterpiece in Shadows over Innistrad, there are a ton of different zombies you can recognize and love. (Just don’t hug them too closely.) And that also makes it great for us to design, because there are seemingly limitless zombie options at our disposal!

The second is that they’re just a blast to play! In Magic, it’s always a little sad when one of your creatures dies. With Zombies, that’s OK! You’re sending a mindless horde that is constantly growing and consuming toward your opponent. Oh, and if they try to stop your zombies you’ll just make more by using what’s sitting around in your graveyard. What’s not to love?

Do you expect Relentless Dead and other zombies to become a popular or competitive deck in the coming months?

A key to game design is making the fun things to do also the right things to do—and Zombies are no exception. We put a lot of work into all of the monster tribes of Innistrad, and you can definitely expect Zombies to come lurching at you from across the table in the months to come. Relentless Dead is actually a card we created specifically to help push the power level of the zombie deck and make them truly, well… relentless. You can definitely expect it to cause much gnashing of teeth for your opponent.

Prepare now while you still can—the zombies are coming!