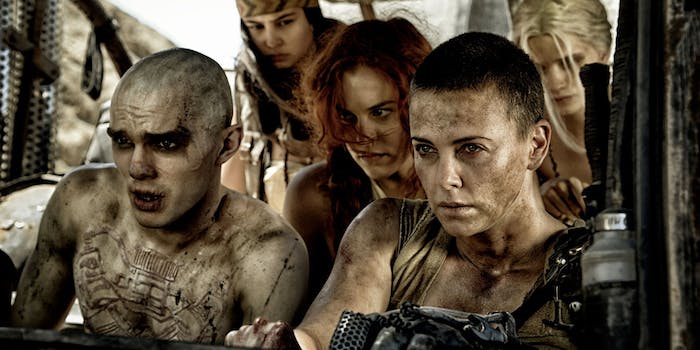 Do you want a 'Mad Max' name like Toast the Knowing or Rictus Erectus? Of course you do.

There’s hardly any dialogue in Mad Max: Fury Road, so you’d be forgiven for not knowing the names of most characters. You probably got Imperator Furiosa (Charlize Theron), Max, and Immortan Joe, but for the rest we highly recommend going over to IMDb and reading the full list of names. It’s definitely worth it.

Toast the Knowing. Rictus Erectus. The Doof Warrior (that’s the flaming guitar guy, by the way.) Corpus Colossus. Slit. Every character has an awesome name, yet another indication of how much backstory and work went into the two hours of movie George Miller plucked from 480 hours of filmed footage and 3,500 storyboard panels.

People on Twitter have started renaming themselves Imperator [Name] in honor of Fury Road‘s grandiose post-apocalyptic titles, but you can do one better with @MadMaxNames.

Tweet MAD MAX NAME to @madmaxname and ol' Nomenclature Joe will tell you what they'll call you in Valhalla! Shiny and chrome!

This Twitter account has spent the past few days handing out Mad Max names to anyone who tweets at it, and the results are just as good as you’d hope.

@LuckyBruciano Your Mad Max Name is "CORVUS CREEPUS THE RAVEN OF THE WASTES". Witness!

@TheClayFox Your Mad Max Name is "DOUBLE GLAZE THE DESERT BANDIT". Your skin is naturally shiny, on account of your disgusting mutations.

@DrunkReptile Your Mad Max Name is "VICIOUS VODKADILE, THE JAWS IN THE DISTILLERY". Shiny!

Unfortunately for anyone who didn’t get in before Sunday night, Nomenclature Joe of @MadMaxNames appears to have retired already. Popular demand became very popular in the last few hours, possibly demanding too many names for one person to handle.

THE SHOP IS CLOSED.
Name Town is disbanded.
The War Rig fueled.
Goodnight, dear Warboys. I'll have some parting words for you tomorrow.

@MadMaxNames hinted he might be back for more when the movie comes out on home release, but in the meantime, witness his passing and take heed of this tweet:

Promise me this, Warboys and girls: when old Nomenclature Joe is gone, you'll mine my archives for Roller Derby names.