The lost confessions of LUE, gaming’s crudest message board

A decade ago, I asked my friends in LUE to share their secrets. Here's what I learned.

If you’re a fan of video games, you’ve probably consulted GameFAQs at some point. The site offers free, user-written walkthroughs of practically every game in existence. It also has thousands of discussion forums, and while most are obviously devoted to games, there are a variety of social boards as well, the most infamous being Life, the Universe and Everything, or LUE.

Founded in 2001 as a place for relatively serious philosophical discussions, it quickly devolved into GameFAQs equivalent of 4chan: lots of memes, crude conversations, and irreverent discussions where nothing was off limits. In 2003, not long after I became an active member, things took a turn for the worse.

That’s when a lengthy stream of spamming and trolling incidents culminated in some self-proclaimed “LUEsers” spamming offensive pictures and messages onto the LiveJournal of a 20-year-old woman who had recently committed suicide. The act prompted the owner of GameFAQs to crack down on LUE. First, it was announced that no new GameFAQs users would ever be able to access it. Two months later, a brief mandatory sign-up period was initiated. Anyone who missed the sign-up—and many annoyed users did—lost LUE access forever.

The end result was 22,584 sign-ups, of which only a few thousand were seriously active. It was a forum of overwhelmingly white, nerdy males, most high school and college age, who liked making trouble and were well aware of their unsavory reputation in the gaming community. And in 2006, when I was 18, I asked for their confessions.

Some confessions made it clear that they felt just as rejected in their virtual lives as they did in their real ones.

I don’t remember what originally inspired the idea—I was probably just bored—but looking back a decade later on the 324 anonymous confessions I received was akin to opening up a time capsule of the earlier web, bringing with it all the memories of what it was like to spend large chunks of my formative years online. 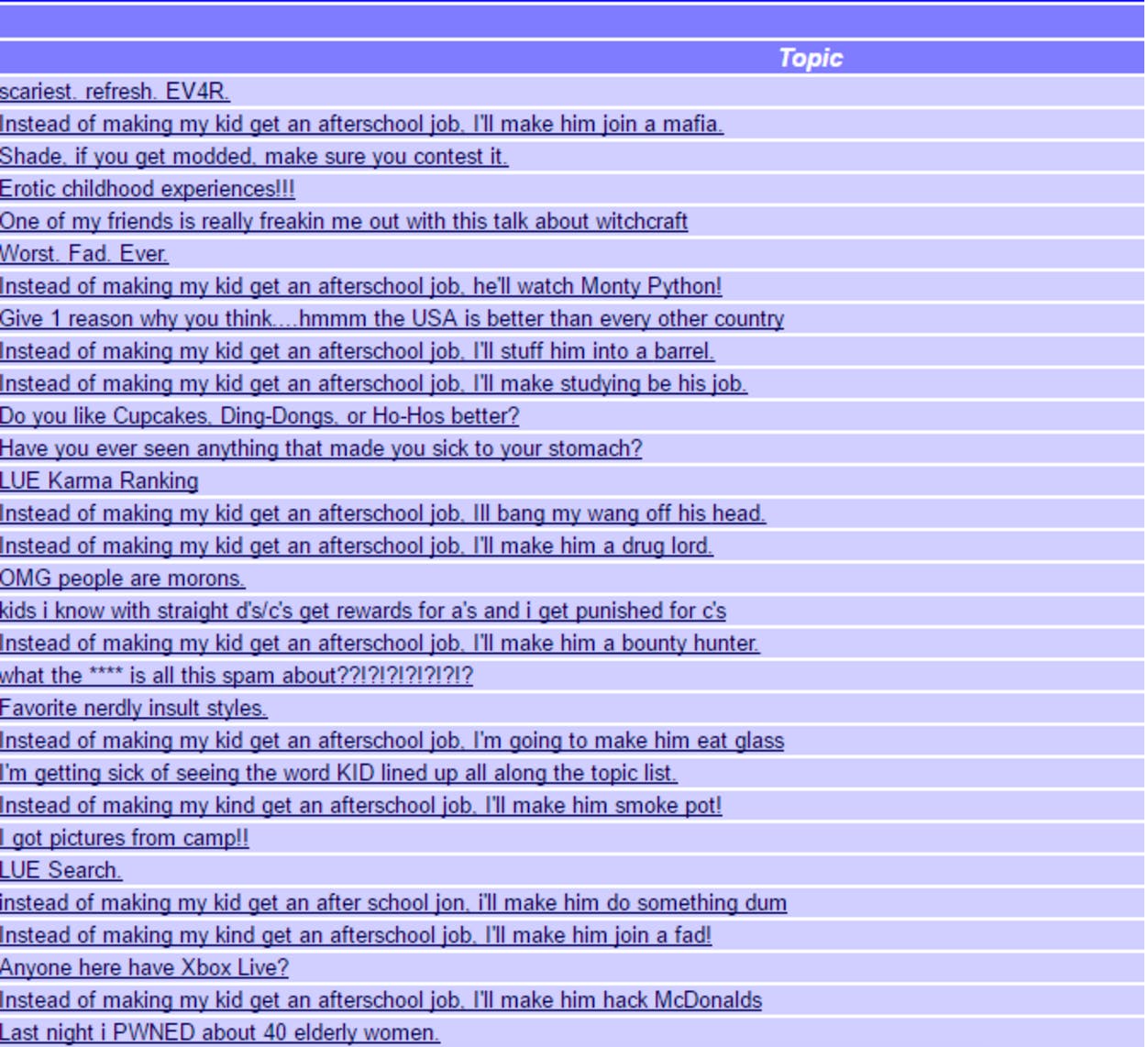 The page I created on GameFAQs to solicit, post, and discuss the confessions has long since been lost to one of the site’s routine purge of old topics. But I surprised myself by remembering both the Gmail account and password I used to receive the submissions, which were anonymized by a third-party website before I shared them back on LUE.

The sexually frustrated were welcome as well. This was, after all, a community for guys who spent a lot of time online. Those having less luck—and there were a lot of us, myself included —were given a sympathetic ear and tips varying wildly in usefulness.

But in the confessions, sexual awkwardness, and insecurity took front and center in a way it didn’t—and couldn’t—on the forums. Even though everyone was hiding behind a screenname, most people didn’t want theirs to forever be associated with ineptitude or a fetish they might be judged for. Anonymity took that problem away.

One LUEser shared a story of an attempt at cybersex with a friend that turned into a prank and left him horribly embarrassed. One confessed to practicing kissing on his younger sister’s friend when she was sleeping over at their house, another of stealing a homemade sex tape from his computer. There were a variety of fetishes confessed, most of which aren’t suitable for print, all sorts body issues and expected concessions (crushes on cousins, cross-dressing, homosexual desires, etc.), and multiple people who thought they’d never lose their virginity. 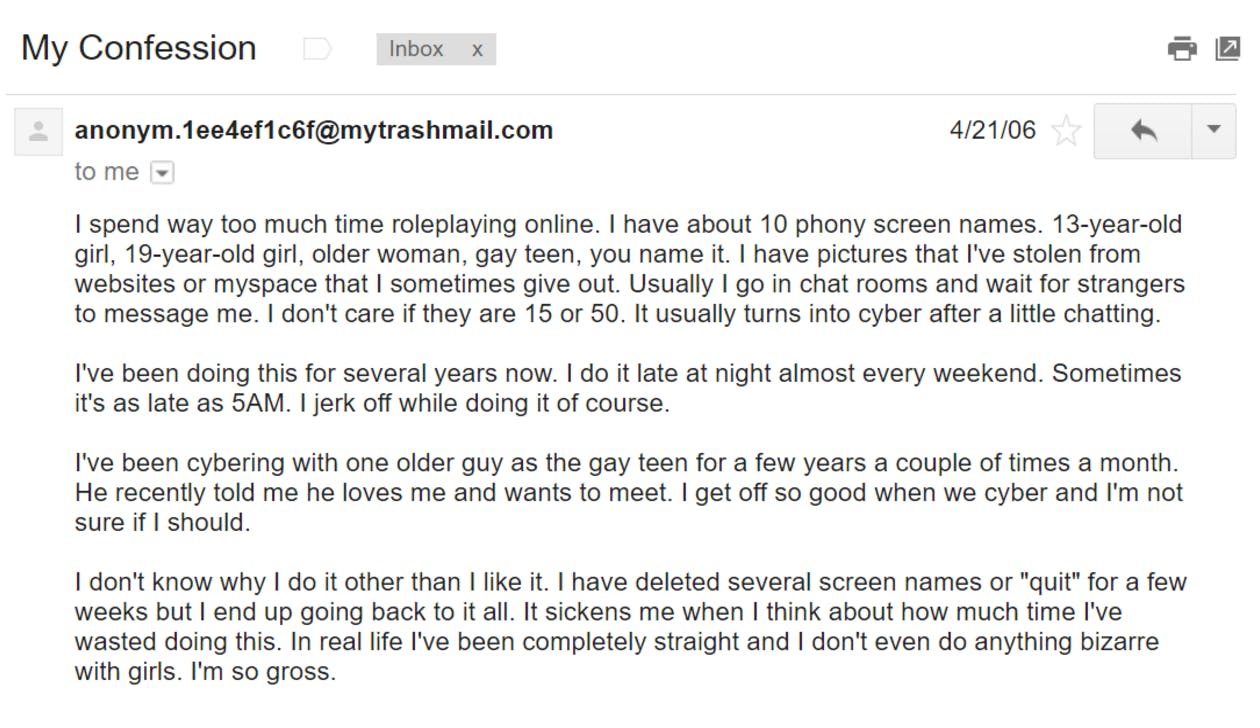 The running theme of sexual angst and insecurity was a sharp contrast to the swaggering bluster on the forum itself. In public, it seemed like every LUEser wanted sex and wasn’t afraid to say so. In private, some LUEsers worried that their bodies or social awkwardness or fetishes would make it impossible. And spending time in a community where having lots of sex was considered a mark of maturity wouldn’t have made it seem any easier.

It would be fair to describe LUE as casually misogynistic—not in a mean-spirited or hateful way, just in the way that young, inexperienced guys can struggle to see girls as people just like them. The forum’s handful of openly female users got endless attention both fawning and insulting. So it’s fitting that several confessions came from users who claimed to be girls but didn’t want to be open about it. “I don’t really want to be called an attention whore and be hated by everybody,” one wrote. (Another confession starts, “i think all the girls on lue are attention whores.”) 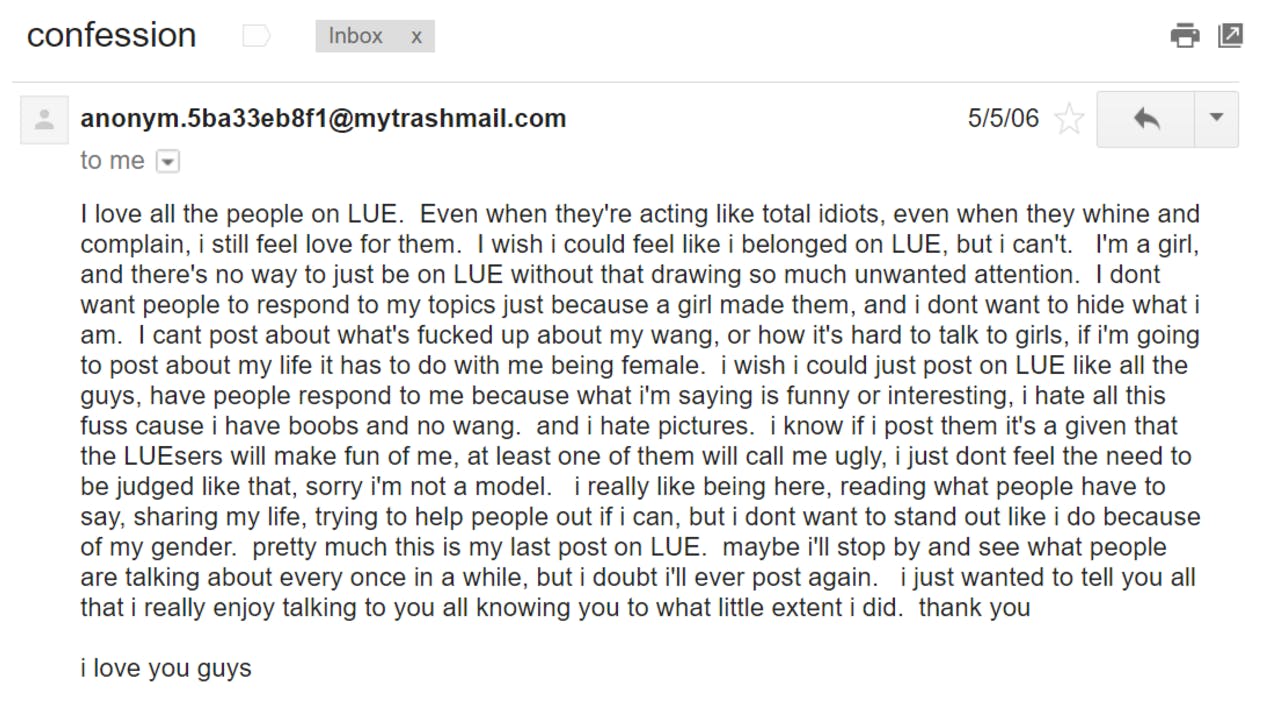 Like any community, LUE had its cliques and major voices, then a huge mass of names that ranged from fairly well-recognized to totally obscure. It would be simplistic to dismiss a forum of thousands as a haven for the socially awkward, but it was also no secret that some users spent lots of time on LUE because they didn’t have the greatest social lives offline. Some confessions made it clear that they felt just as rejected in their virtual lives as they did in their real ones.

Every LUEser liked the forum’s inclusiveness—it was like a virtual clubhouse where we’d be perpetually safe from outside judgment and authority—but it was rare for someone to show raw emotion over it. No one wanted to admit that a meme-spamming video game spinoff forum played a large role in their life. One confession in particular summed up the dilemma between wanting to be loved by LUE while also feeling embarrassed about it.

The Confessions topic was the most successful one I ever made on LUE. I was firmly middle of the pack in popularity, and I oscillated between wishing I got just a little more recognition and worrying that I was putting too much stock in my online life. Those three chief concerns—popularity, sex, and harassment—are three trends you can find across the internet in general, and LUE offered a weird microcosm of them.

There were more troubling confessions, too: an unrepentant serial rapist, a robbery for drug money, and several posts about suicidal thoughts. 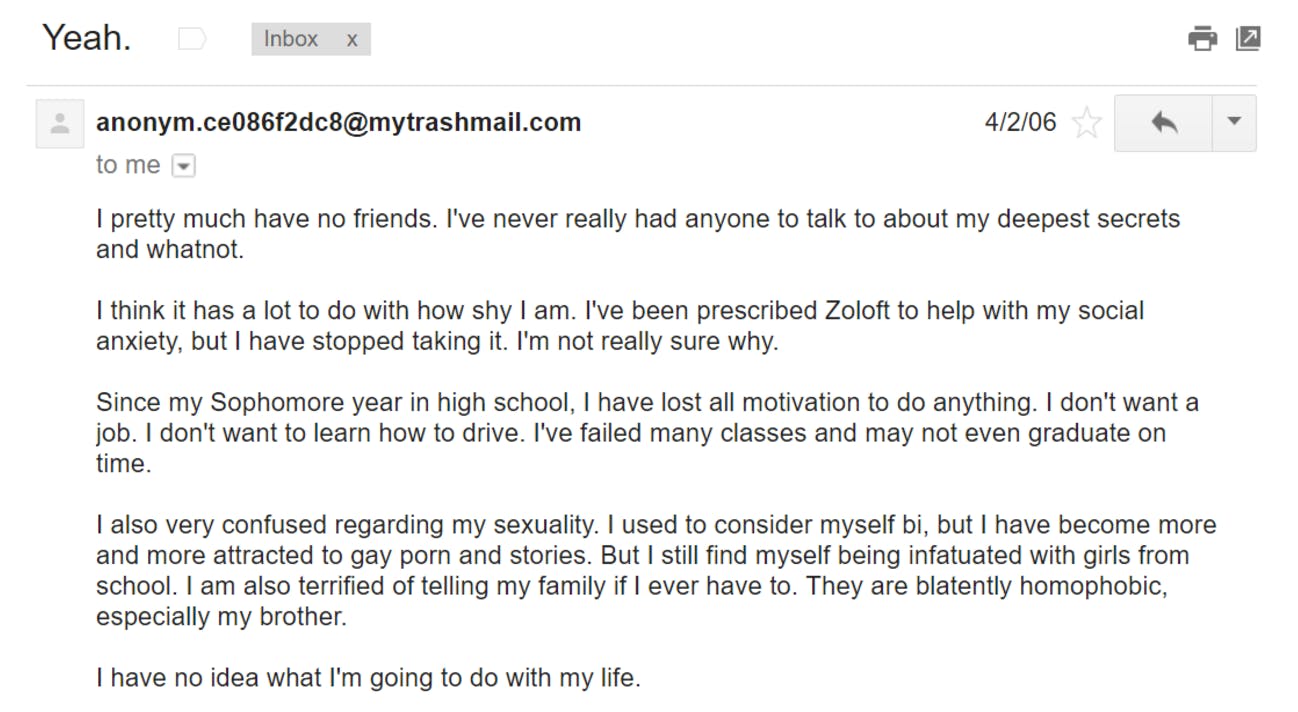 It was as hard to tell then as it is now if the posts were for mere shock value. I don’t really remember what the reception to the posts at the time, except that it was more or less what you’d expect: a lot of gawking and a few guesses at who was confessing what, but no serious conversations. Or least, none that was remarkable enough for me to remember them a decade later.

It’s easy, then, to dismiss some of the confessions as generic teen angst, but part of me will always wonder just how serious they were. When you’re 18, you don’t give much stock to the future—or at least I didn’t, and I know I was hardly alone on LUE. The future was a nebulous and undefinable thing, where marriages and careers seemed impossible to worry about because we could barely comprehend having them. Talk of suicide was just background noise at LUE, not something we were seriously equipped to deal with.

LUE is still around today, but visiting it is as awkward as a high school reunion. As of 2012, the number of GameFAQs accounts with access to LUE was down to 13,562, but only a fraction of them are actually active. There are only a few dozen posts a day instead of the several hundred LUE used to see, and the discussions have mellowed out and (mostly) matured.

Most of its active users have gotten over their hang-ups with socialization and sex. A few haven’t but are still trying. Maybe the unrepentant rapist is still there, talking about pop culture and his job and his family, or maybe he’s long gone. Maybe he was never real.

The confessions are a snapshot of teenage life on the internet in 2006. It wasn’t hard to find anonymous confessions in 2006, and it’s even easier now. There’s a subreddit for it, among many other venues. But LUE’s isolation made it unique. You weren’t just shouting into the void; you were confessing to your friends, to a slowly dwindling community that liked each other a lot—at least when they weren’t busy trolling each other.