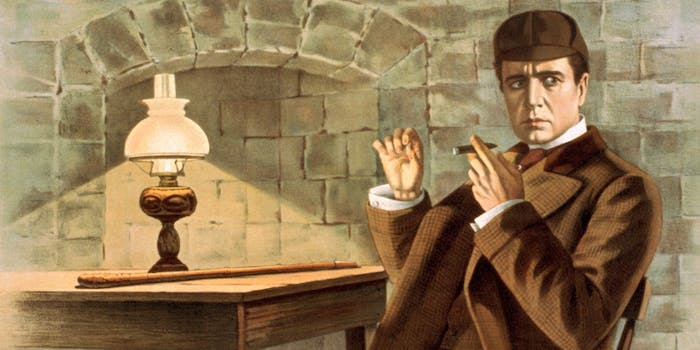 Yes, we want this lost Sherlock Holmes story to be real. But experts think it's just a 111-year-old fanfic.

Sherlock Holmes fans are salivating over the possibility that a long-lost Holmes story has been unearthed in the attic of an 80-year-old man in the Scottish border town of Selkirk.

The 1,300-word story is titled Sherlock Homes: Discovering the Border Burghs and, by deduction, the Brig Bazaar, and was published in a 48-page booklet to raise money for a local bridge to be built in 1904. Sir Arthur Conan Doyle often visited the area, so it’s conceivable that he might have volunteered to write something for the fundraising effort.

Discovering the Border Burghs is being reported as the first discovery of a “new” Holmes story in decades, but many Sherlockians already have their doubts.

The main evidence supporting the claim is the fact that it’s listed as being written by Conan Doyle, but there were already plenty of vintage Sherlock Holmes fanfiction stories knocking around in the early 20th century. It’s more likely that this story is a pastiche written by a fan, probably not even intended to fool its audience. It’s a bit like someone writing a Harry Potter story for their local village newsletter and then jokingly signing it “J.K. Rowling.”

There are a number of misspellings in the transcribed text of the Selkirk story. Original text in the pictures here: https://t.co/mnl3lh4Kci

Holmes fan Mattias Boström argues the story must be a pastiche because it refers to Sherlock Holmes in quotation marks, indicating that the narrator knows he is fictional. Boström also points out that the book didn’t advertise Conan Doyle as an author, which would have been quite a coup at the time. A local newspaper ad simply lists the contributors as “Natives, or Borderers who have a close interest in the Town.” Conan Doyle fits into neither of those categories.

Over at the Conan Doyle Encyclopedia, another fan writes, “No serious editor in 1903 would have published Conan Doyle anonymously,” adding, “the style of the text is not Conan Doyle’s.”

Conan Doyle was at the height of his career at this point, so it wouldn’t make sense that a new story from him—even one published in a local booklet—could remain un-publicized for 111 years.

You can judge the story’s worth for yourself, because the Telegraph has reprinted it in full.

We’re inclined to side with the dedicated Sherlockians who think it’s an early incarnation of fanfiction. Their deduction skills have been honed through years of practice, and if anyone could separate the real deal from the pastiche, it’s them.