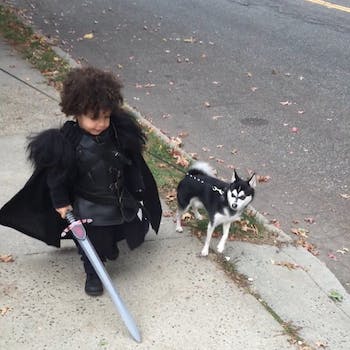 Jon and Ghost, out on another adventure.

We’ve seen a wealth of Game of Thrones costumes and cosplay emerge since the show started six years ago, but one commander and his loyal pet are ready to take charge in an adorable fashion.

The photo shows a young Jon Snow and an Alaskan Klee Kai puppy standing in for Ghost as Jon drags Longclaw along the sidewalk. (A Valyrian steel sword is a heavy thing for such a young commander.) The photo made waves across multiple subreddits after it was posted online this week, although it appears to have originated in a 2015 post-Halloween costume roundup from Game of Thrones fansite Winter Is Coming. The WIC post has an additional photo of the boy, whose name is Cameron, and he’s preparing for high-stakes cuteness.

But some fans were seeing the photo of Cameron for the first time, and jumping off the name of the post—”Little Jon”—started to mash up Lil Jon lyrics with Game of Thrones for some incredible turned up results.

However, we must also applaud the people who went a different direction and adapted a song from the 1973 Disney animated classic Robin Hood (as well as Mel Brooks’ Men in Tights) instead.

What a day to fight some White Walkers, indeed.