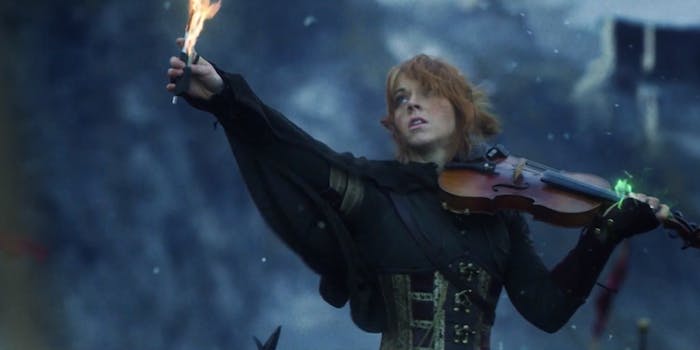 You have to see her amazing music video.

From Malukah to Taylor Davis, gamers are some of the most musical fans in geek culture.

Lindsey Stirling is one of the most popular of these musicians, using her violin skills to take music from games like Halo and Assassin’s Creed III to stunning new levels through the way she plays and the way she produces her YouTube videos.

There’s no better example of this than her latest cover of the main theme from BioWare’s new Dragon Age: Inquisition. Not only does she give a great performance, but with the help of digital studio Everdream she’s even able to take on a dragon with her violin. Stirling posted the video online Tuesday, coinciding with Inquisition’s release, and it’s already been viewed more than a million times.

Perhaps it should come as no surprise that video game music inspires musicians in this way. The produces of many iconic game soundtracks wanted to engross gamers and get them emotionally involved with the story. Dragon Age’s music is no exception. Still, it’s always amazing to see fans use their talents to give audio tracks their own unique spin.

You can see more of Stirling’s work on her YouTube channel.