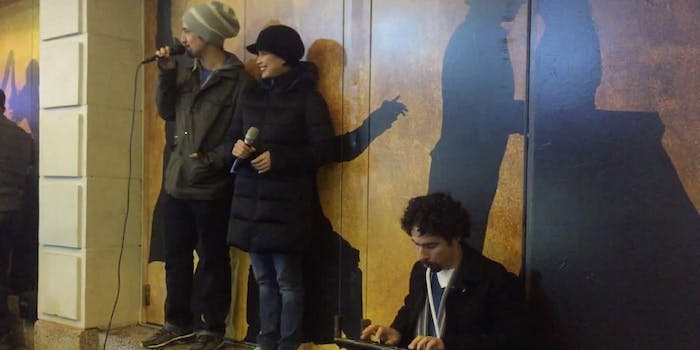 The world will never be the same.

Disney fans just got a whole new performance of one of the greatest songs ever written, courtesy of Lin-Manuel Miranda, the genius behind Hamilton, and Lea Salonga, the original singing voice of Jasmine in Aladdin.

If you’re in New York City, you might occasionally feel the urge to line up for hours at #Ham4Ham, the lottery for Hamilton that has become Broadway’s biggest block party. Before many performances, composer and star Miranda invites a glittering rotation of theater celebrities to join him for spontaneous informal concerts outside the Richard Rodgers Theatre.

I almost went on Wednesday, but it was cloudy, and I had work to do. It turns out that I missed an absolutely unforgettable experience for theater lovers and Disney fans alike: the incomparable Lea Salonga, who sang the roles of Jasmine and Mulan for Disney. (The creators of Les Miserables once described her as having “lungs of steel.”)

Salonga joined Miranda for an amazing rendition of “A Whole New World”—and she sounded just as golden as she did in the ’90s. They’re accompanied by Alex Lacamoire, musical director and arranger of Hamilton and Miranda’s Pulitzer-nominated In the Heights, on a melodica, along with a dreamy-sounding crowd.

There are three lessons here:

I don’t know about you, but it’s definitely a whole new world for me.

Correction: Ham4Ham does not precede every showing of Hamilton.