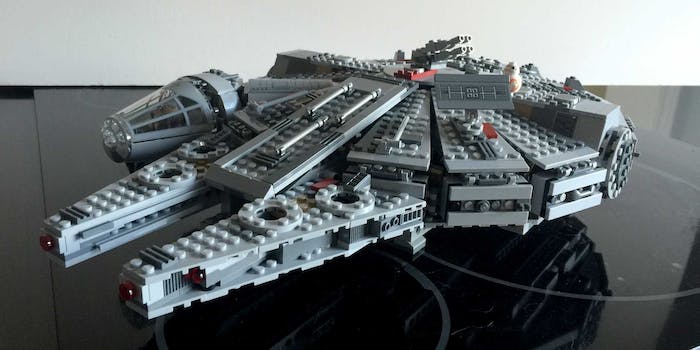 She's as sturdy as her namesake.

Stability. That’s the name of the game with the new, Star Wars Episode VII: The Force Awakens Lego Millennium Falcon. It could probably stand up to being thrown against the wall, not that anyone but a sadist would want to try.

It’s fitting, given the ship’s lore. As Han Solo tells Luke Skywalker in the first Star Wars movie, “She may not look like much, but she’s got it where it counts, kid.” There’s no way the old, beaten-up Corellian Spice Freighter could have done the Kessel Run in less than 12 parsecs at anything less than rock solid. 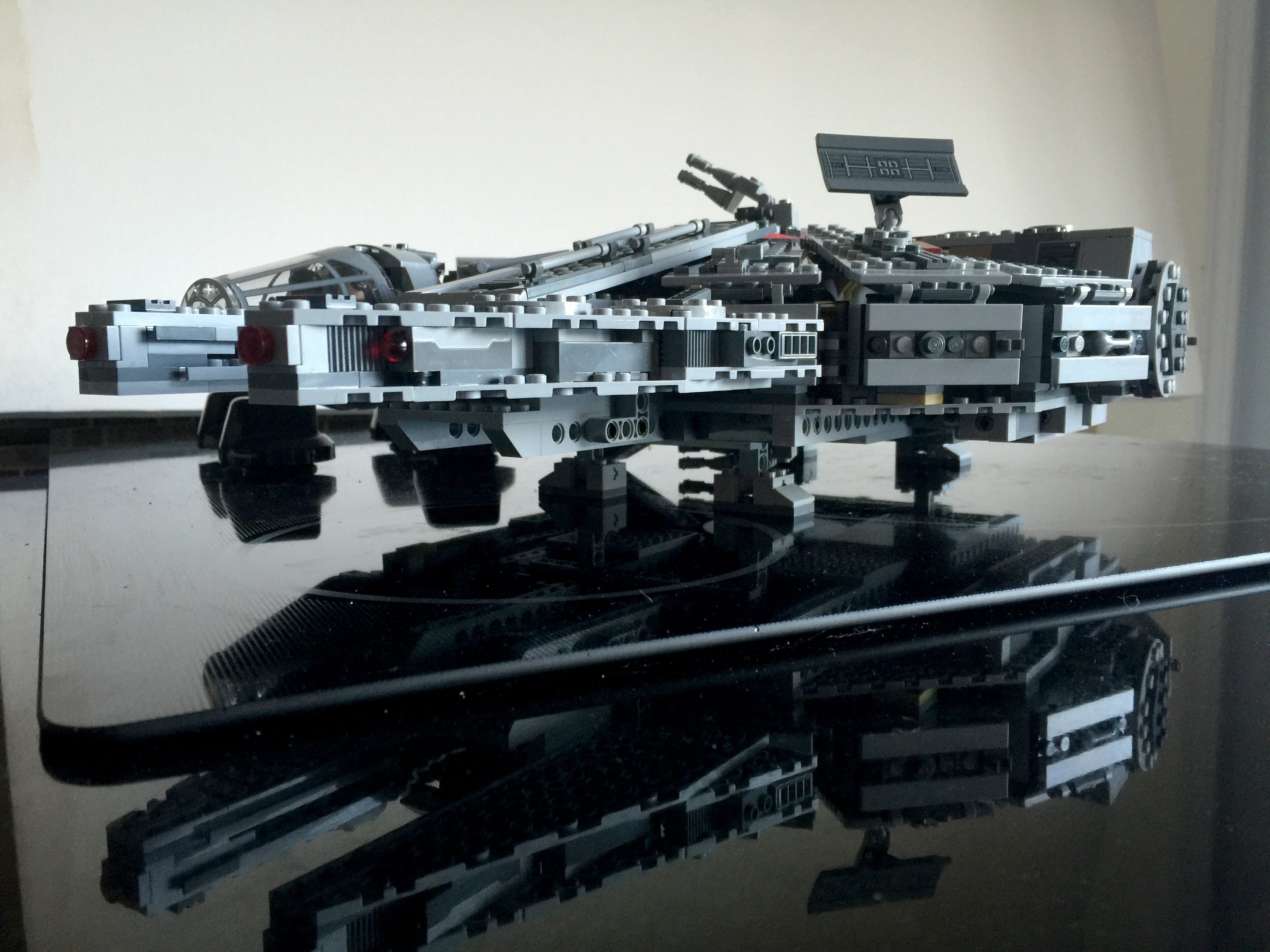 The new, fourth edition is closer to its immediate predecessor, the third version from 2011, with many of the same features plus a few new ones. Like previous releases, the new Falcon has roof flaps that open up to reveal the cabin inside. Like the 2011 model, the new ship uses wider hinges that are better at keeping those flaps from falling off. 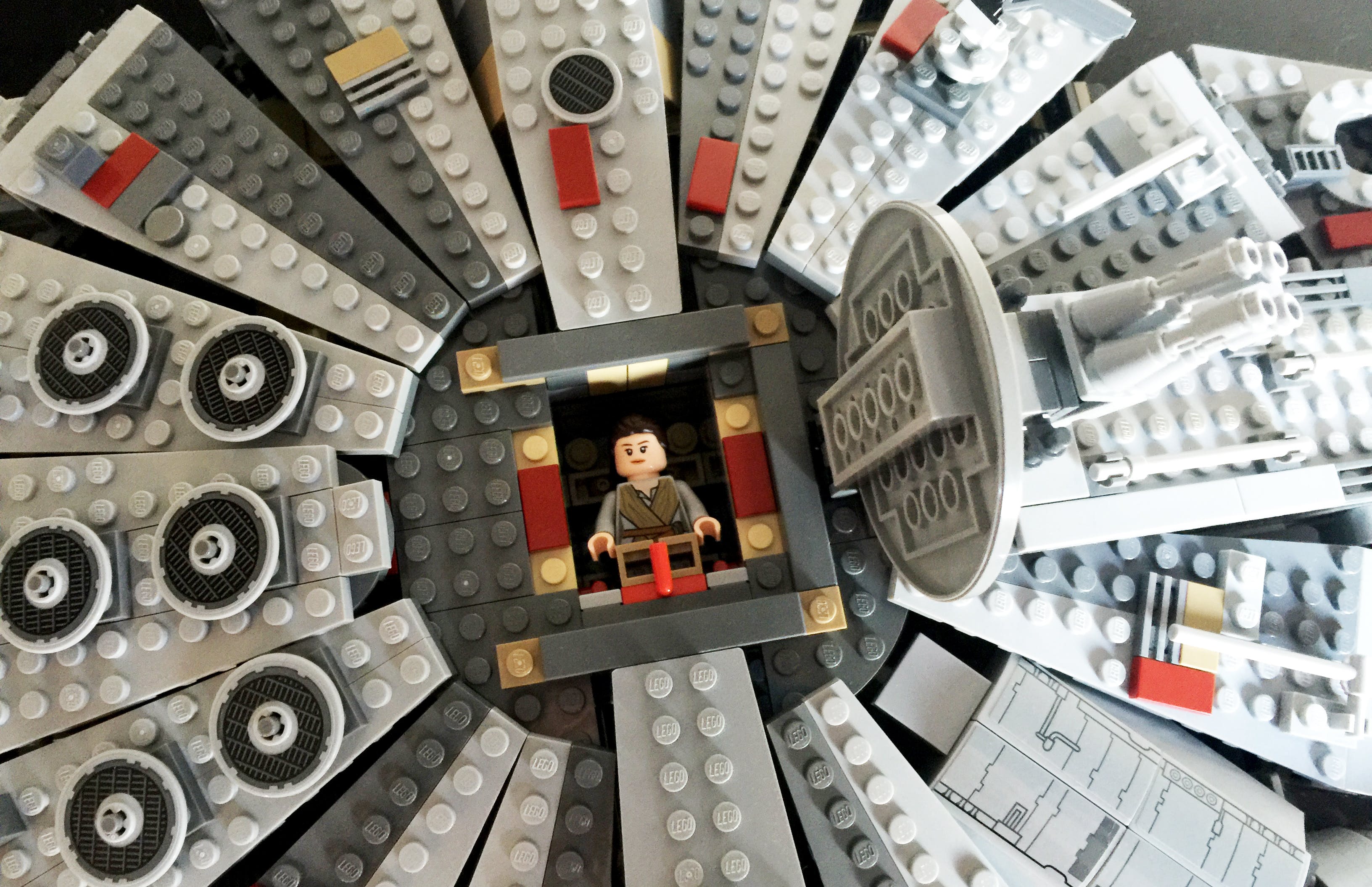 The base of the set itself incorporates elements from the advanced Technic series, a growing trend in Lego Star Wars toys. The various Technic pipes and pins create a solid base upon which the rest of the ship is built.

The landing gear also uses Technic pieces, so the ship can be easily moved around without falling apart. Even the radar dish—which is now rectangular to reflect the ship in the new movie, as opposed to round in the original trilogy—is more firmly secured with a pin. All told, the Falcon feels very solid in your hands. 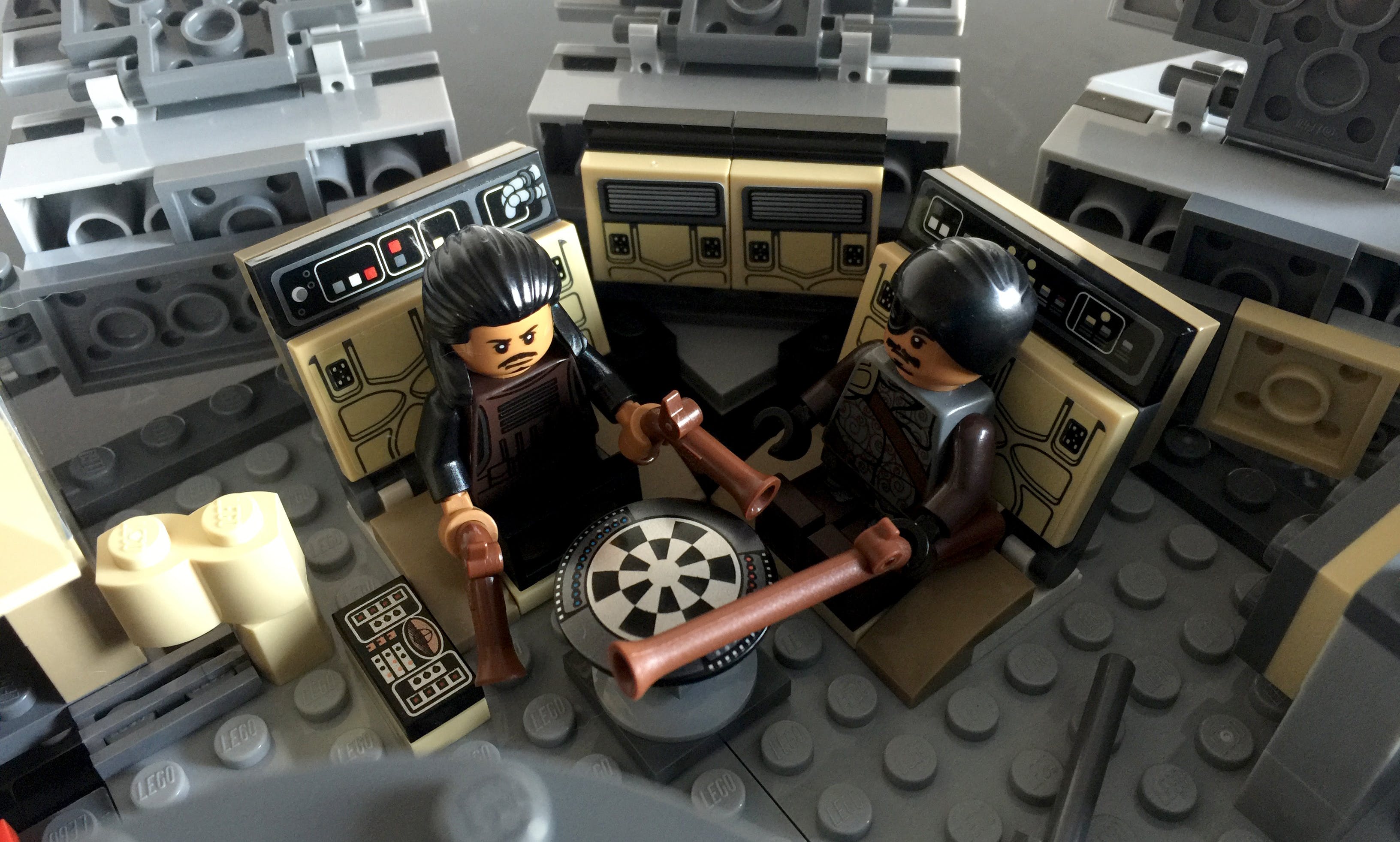 The interior hits many of the ship’s key points. The light-speed drive is located at the rear, while the center is dominated by control panels and other assorted doodads. The spacey chess table, where it’s wise to “let the Wookiee win,” is now more substantial and can swivel around. There’s more detail and color both inside and outside.

The 2011 version did away with the escape capsule and added a smuggling compartment and a slide-in, two-person turret seat, which fits into the cylindrical chamber in the middle of the ship. The new version has all of that, as well as laser cannons both on top and underneath. It also adds ejecting missiles, which are housed in each of the Falcon’s front nose sections. 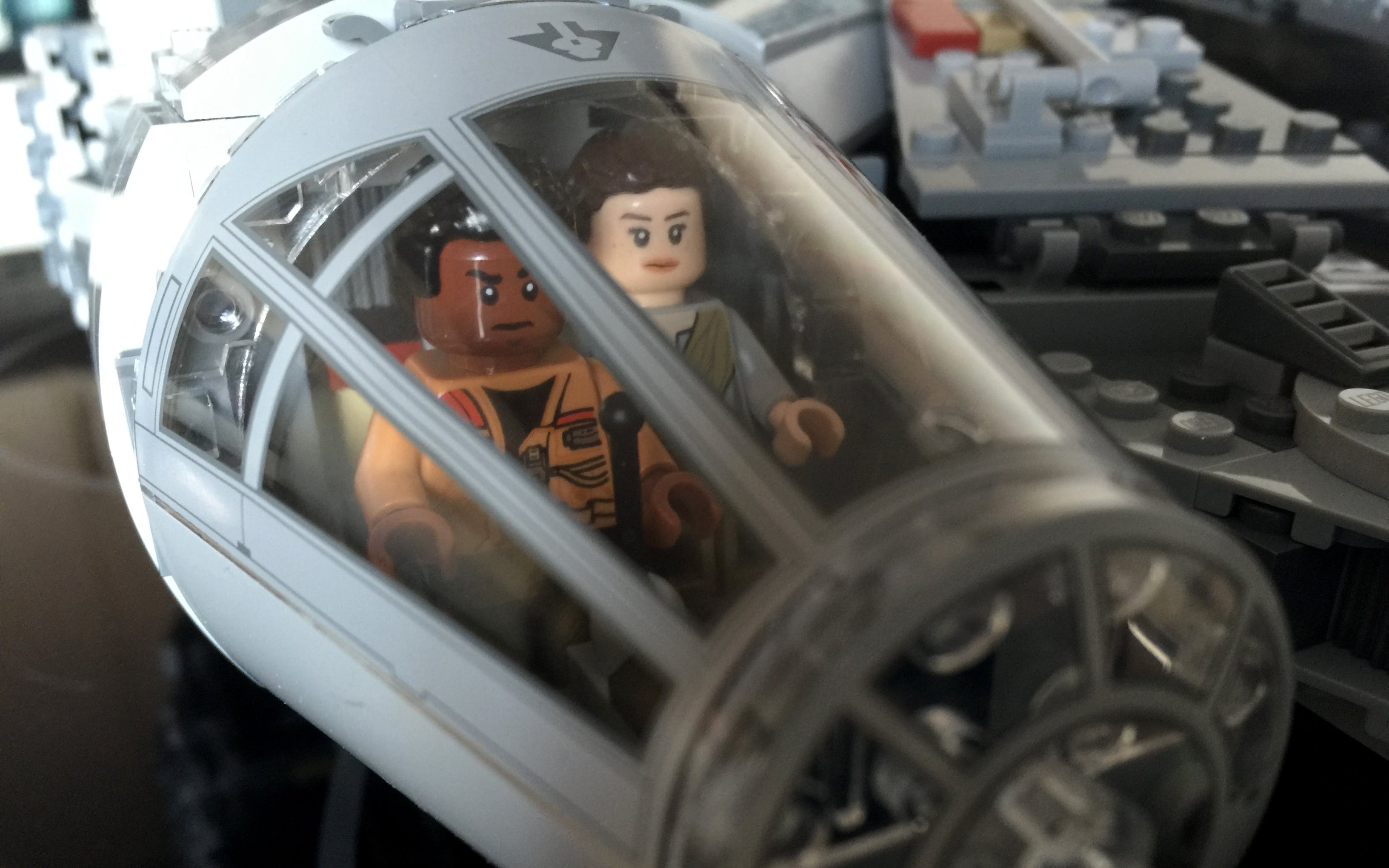 The most important new bits come in the form of the mini-figures. Two of The Force Awakens’ protagonists, Finn and Rey, are included, as are a pair of baddies that we don’t yet know much about: the gangster Tasu Leech and a Kanjiklub gang member. Exactly who these villains are or what they do won’t be known until the film’s release in December. 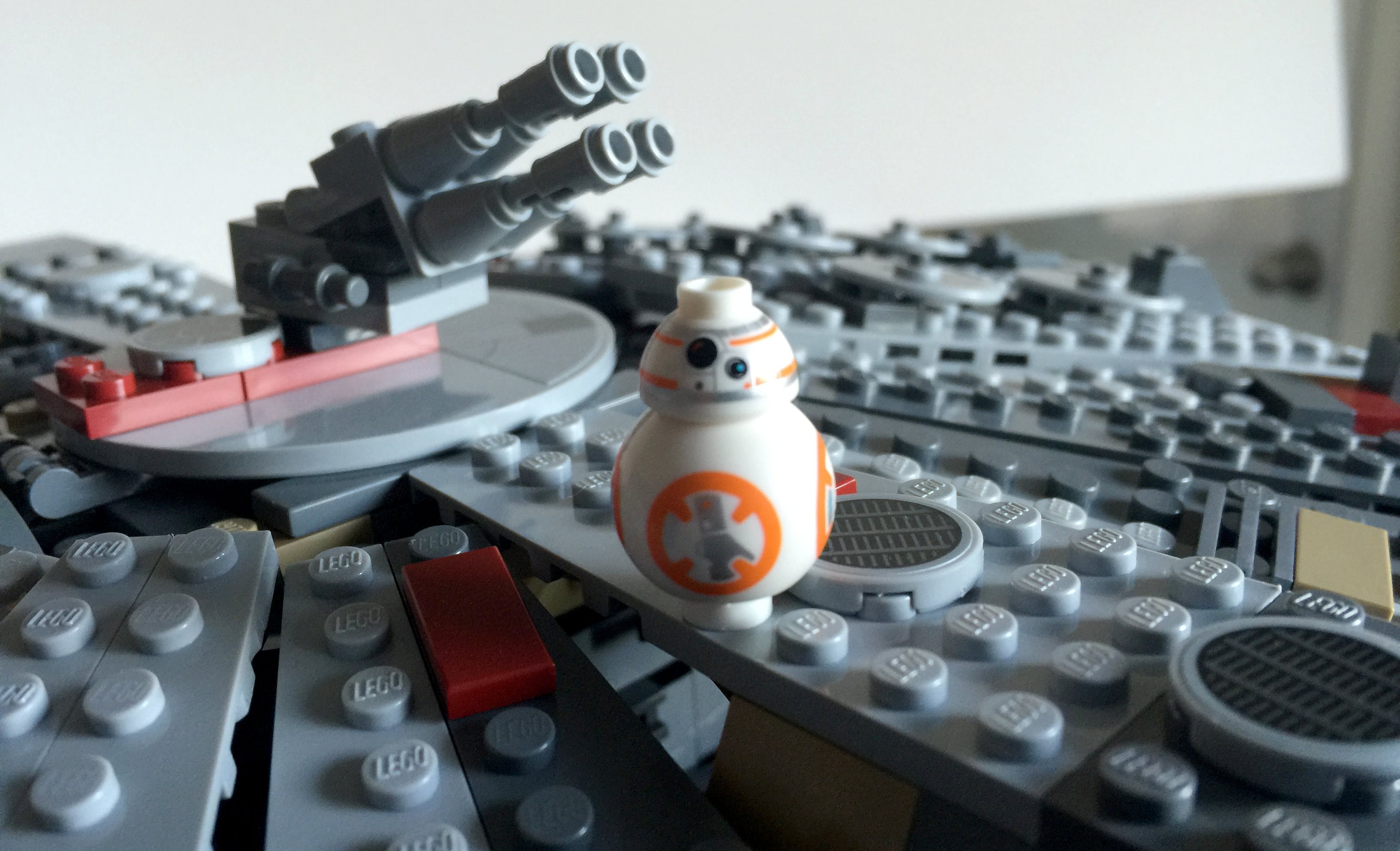 Also included is BB-8, the R2-D2 for a new generation. The droid is already a huge hit, with toy maker Sphero quickly running out of stock of its recently released remote control robot. The Lego version is remarkably simple: one tiny ball-shaped element on top of another slightly larger ball-shaped element.

The piece, or pieces, de la resistance of The Force Awakens Millennium Falcon set has to be the new—or should we say old?—Han and Chewbacca mini-figures. The grey-haired Han looks as grizzled as a Lego figure can, while even Chewie is showing signs of age with shots of blonde hair around his face and on his legs. 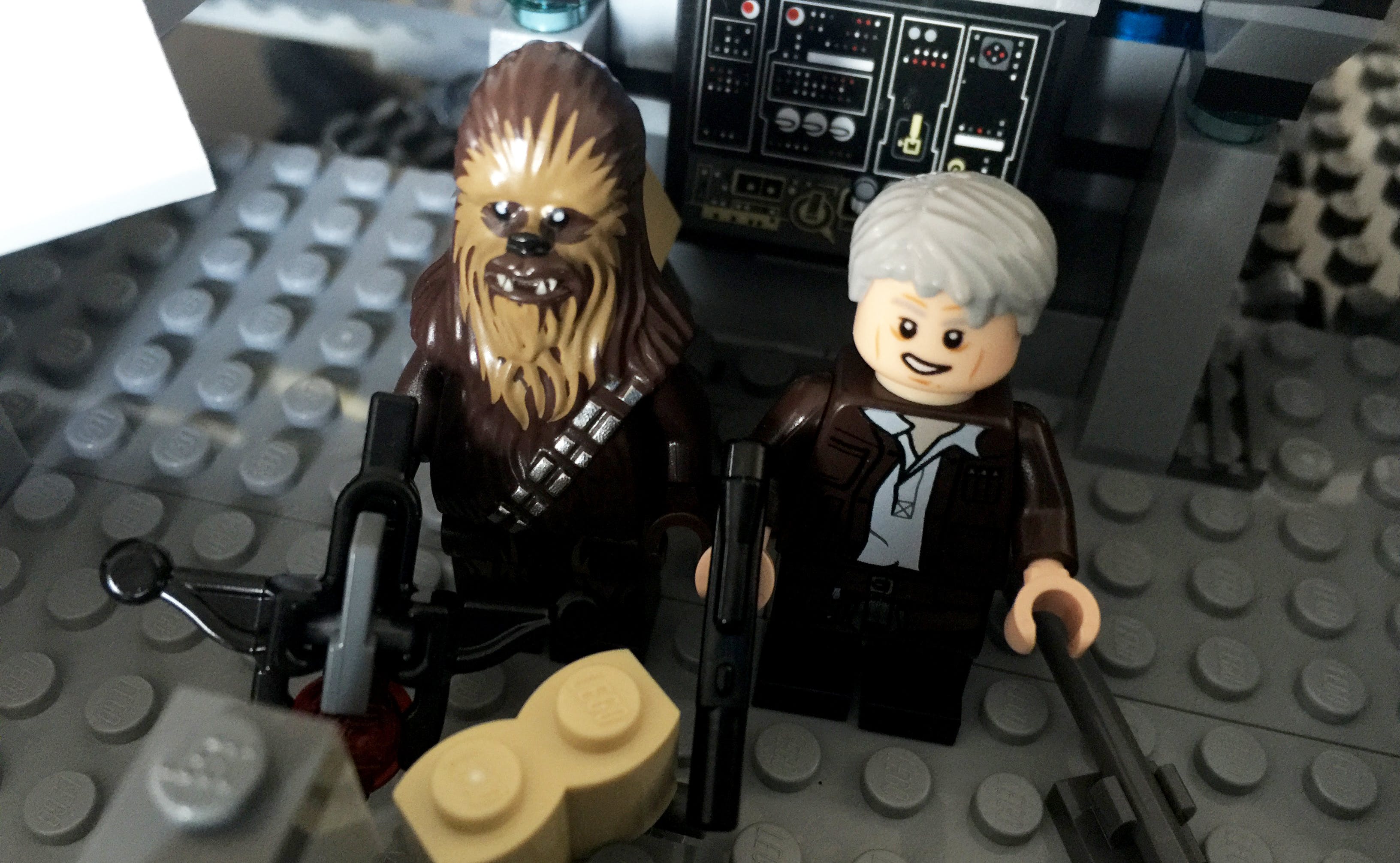 These are the most detailed and intricate Han and Chewie mini-figures yet. Han’s jacket and shirt collar are depicted in full detail while Chewbacca even gets a working bowcaster. Rather than just a single piece of moulded plastic, it’s now assembled from three parts, one of which is a red stud that can be fired. 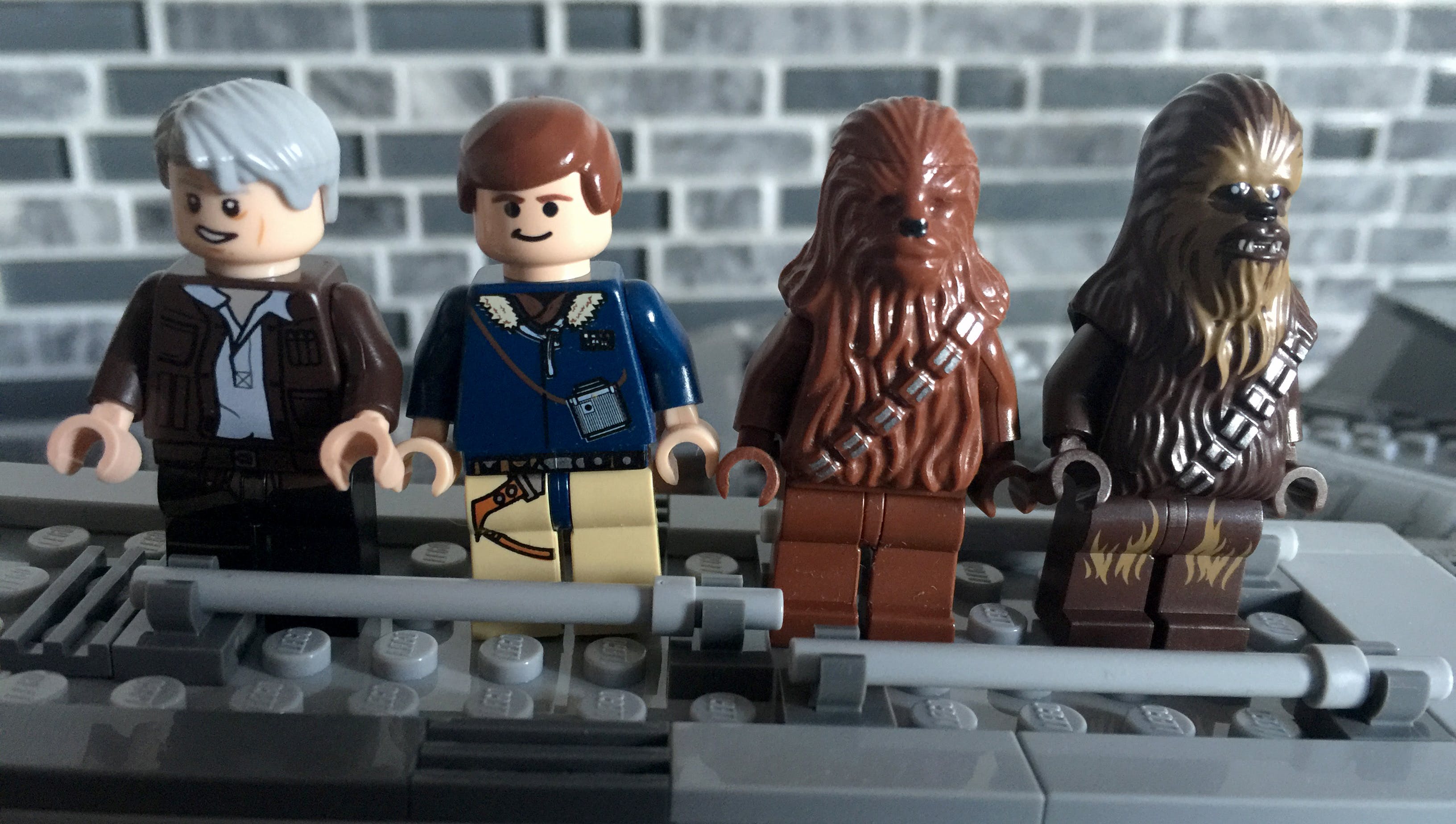 2004 versions of Lego Han Solo and Chewbacca with the new 2015 versions.

The best part about Han is that if you’ve got any of his other mini-figures, you can just pop off his grey hair piece and replace it with an older brown one. Voila: instant young, detailed Han Solo. Harrison Ford himself wishes it were that easy.

Are the mini-figures worth the $149 price of admission? For some collectors, maybe. For the casual fan, not so much. The ship itself is great value, though, especially for Lego builders who don’t already have the 2011 Millennium Falcon, or who may be stuck with the rickety 2004 version.

The Force is strong with this one—at least the force that holds it together.