This is the first time Lego has never approved a project from a Lego Ideas review period.

For the first time ever, Lego has rejected every Lego Ideas project considered for production during a review period. The surprising result shared Friday included projects that were proposed by fans on the Lego Ideas website and received 10,000 supporters between January and May. Once a proposed project reaches this goal it goes to Lego to be considered for production.

Out of the 13 projects that achieved this goal in the first part of 2015 not one will be produced by Lego. This is an especially surprising result because this round of projects included many that had received a lot of attention from fans online. The International Space Station set was shared not only by space enthusiasts but by agencies like NASA on social media. The proposed Science Adventures set was another creation of geochemist Ellen Kooijman, who proposed Lego’s successful Research Institute set featuring female scientists which went into production. The most well-known project in the rejected bunch is the Golden Girls living room and kitchen modular set that went viral earlier this year and would have included mini-figures of the characters Dorothy, Rose, Blanche, Sophia, and Stan.

While perhaps lesser known, the other projects would have also made interesting sets. They included Discworld, the Titanic, Legends of Zelda: King of Red Lions, Daft Punk, Tyrannosaurus Rex, Elsa’s palace from Frozen, a medieval market street, and more. 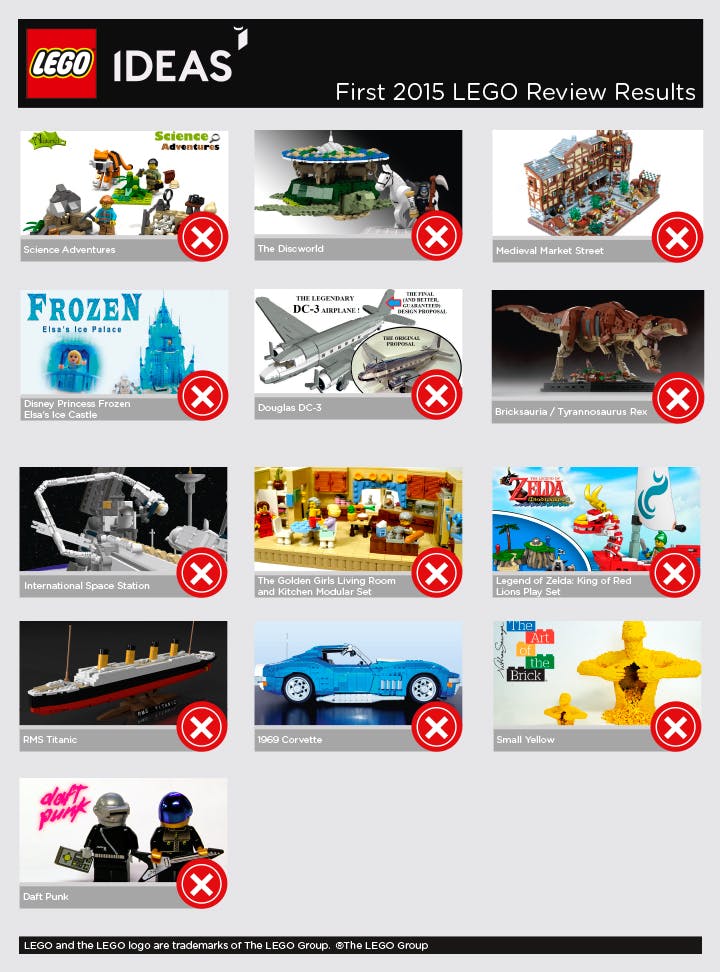 “For a number of reasons, none of the projects that qualified during this period were selected in the Lego Review; this has never happened before and we’re very disappointed to pass on this news, especially because we know the huge amount of effort each member put into creating the models and campaigning for their projects,” the Lego Ideas blog post states.

According to Lego, the company cannot state exact reasons why a specific project did not make it through the review process but it did offer the three below examples of why they might have been rejected.

The results disappointed fans of these projects who shared their sadness on Twitter.

@CERuge arrrggghhhh very sorry…. did you get a reason for your project ? If you submit it again, i'll support it again :)

Alas, Lego Discworld will never see the light of day.

This was the first review for 2015. The results of the second review won’t be announced until early 2016. The projects included in that review include Adventure Time figures, Ghostbusters’ Stay Puft Marshmallow Man, Rivendell from The Hobbit, and more.