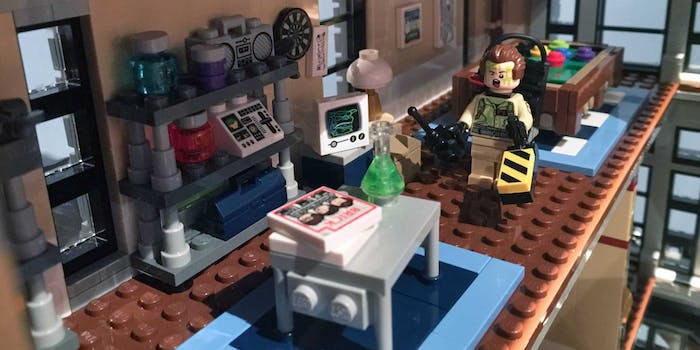 The Lego Ghostbusters firehouse is 4,634 pieces of pure nostalgic bliss

It's one of the biggest Lego sets ever made.

If it’s an insanely big and detailed Lego set you’re looking for, who you gonna call?

There’s only one correct answer to that question for anyone who has any pop-culture sensibilities: It’s Ghostbusters, of course. 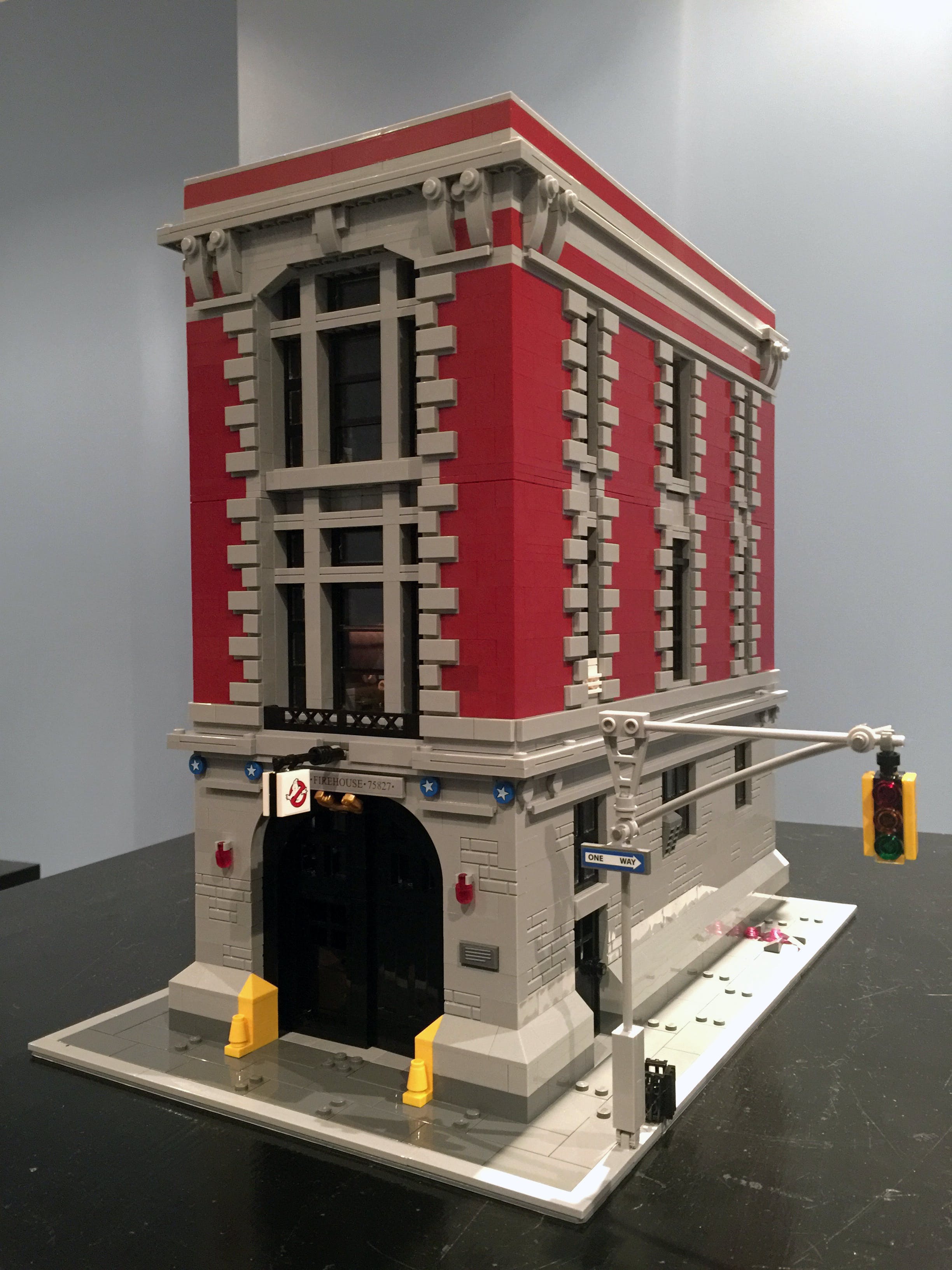 The Lego Ghostbusters Firehouse Headquarters is a $349 monstrosity that stands nearly a foot-and-a-half tall. At 4,634 pieces, it’s one of the biggest sets Lego has ever made. It’s definitely a showpiece, and there’s no doubt some aficionados will be lusting after it for exactly that reason.

It’s aimed at collectors, with a suggested age of 16 and higher. Never mind that only older Lego fans are likely familiar with the source material, at least until the new, all-female Ghostbusters reboot hits theaters this summer. 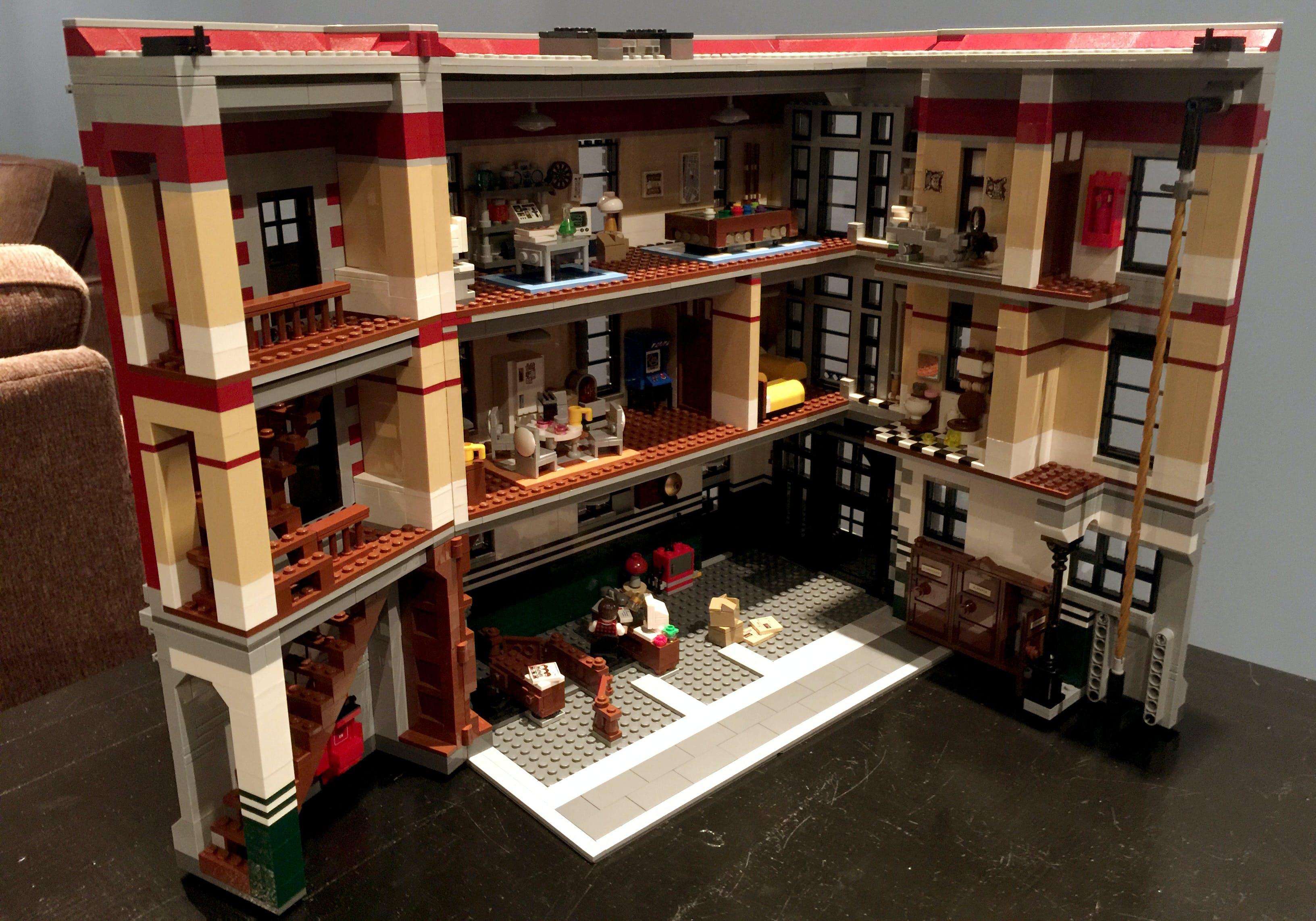 The Firehouse faithfully replicates the Ghostbusters’ New York headquarters from the 1984 movie. In the film, the crew reclaims the derelict fire hall and remodels it to suit their supernatural purposes. Lego designers have packed a lot of those details in, and they’re sure to delight fans.

The building itself is something of a Lego architectural wonder. It’s a classic three-story New York brownstone—red-brick-stone, actually—segmented into three parts, two of which swing open to reveal the meticulously detailed interiors.

It borrows elements from Lego’s Creator line and thus bears some resemblance to the Palace Cinema and Town Hall buildings. At the same time, it also incorporates small details and references from its source material, much like the Lego Simpsons House and Kwik-E-Mart did with their respective source. 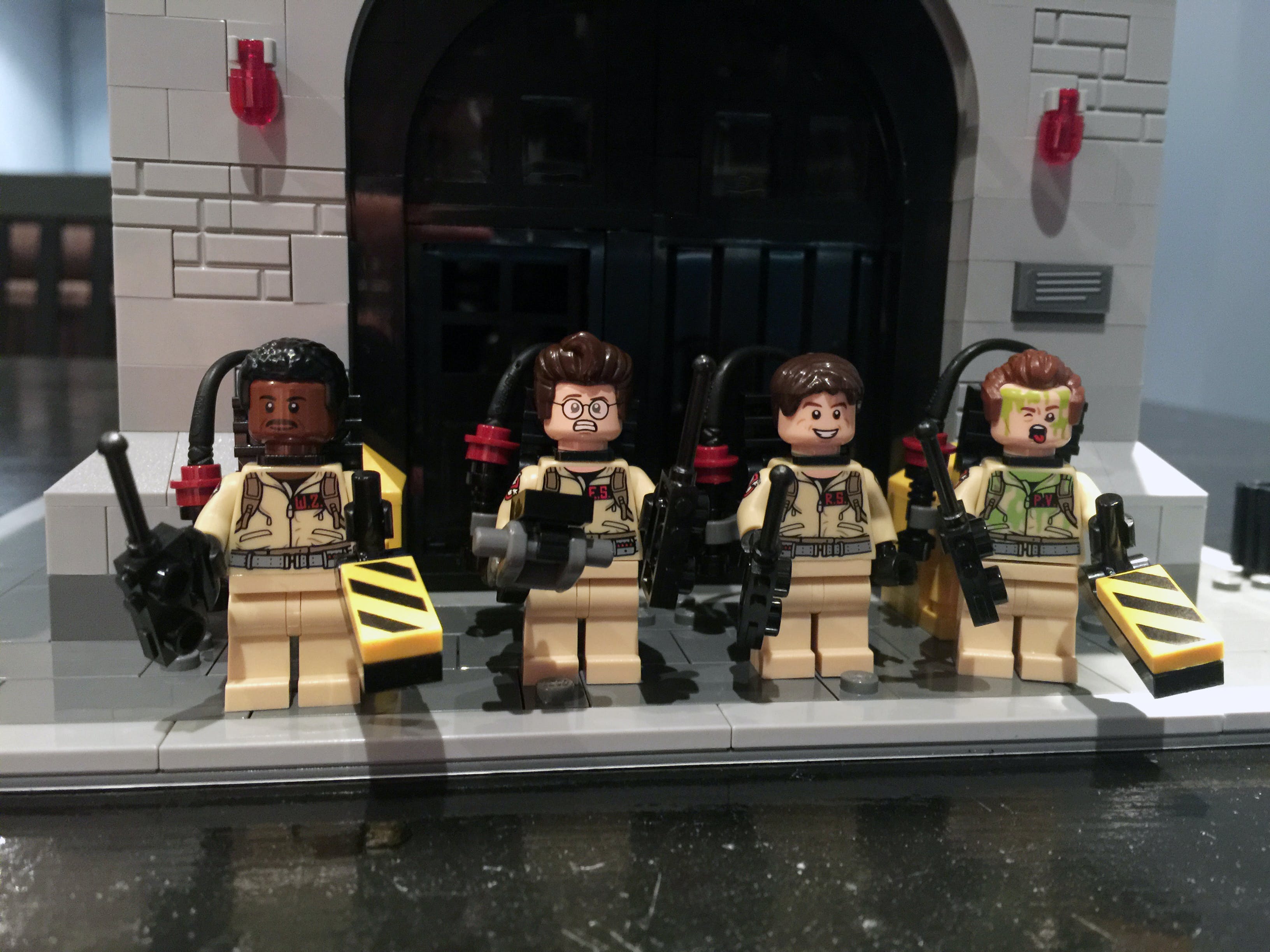 The first of the building’s three floors houses reception, complete with a pair of desks manned by trusty—and sarcastic—secretary Janine Melnitz. Boxes of unopened newspapers featuring the Ghostbusters on the cover sit across from the lockers bearing three of the crew’s names: Peter Venkman (Bill Murray), Raymond Stantz (Dan Aykroyd) and Egon Spengler (Harold Ramis). The lockers hold their ghost-zapping proton packs when they’re not in use.

Alas, there’s no locker for Winston Zeddemore, the fourth Ghostbuster, which is unfortunately in line with the original movie. 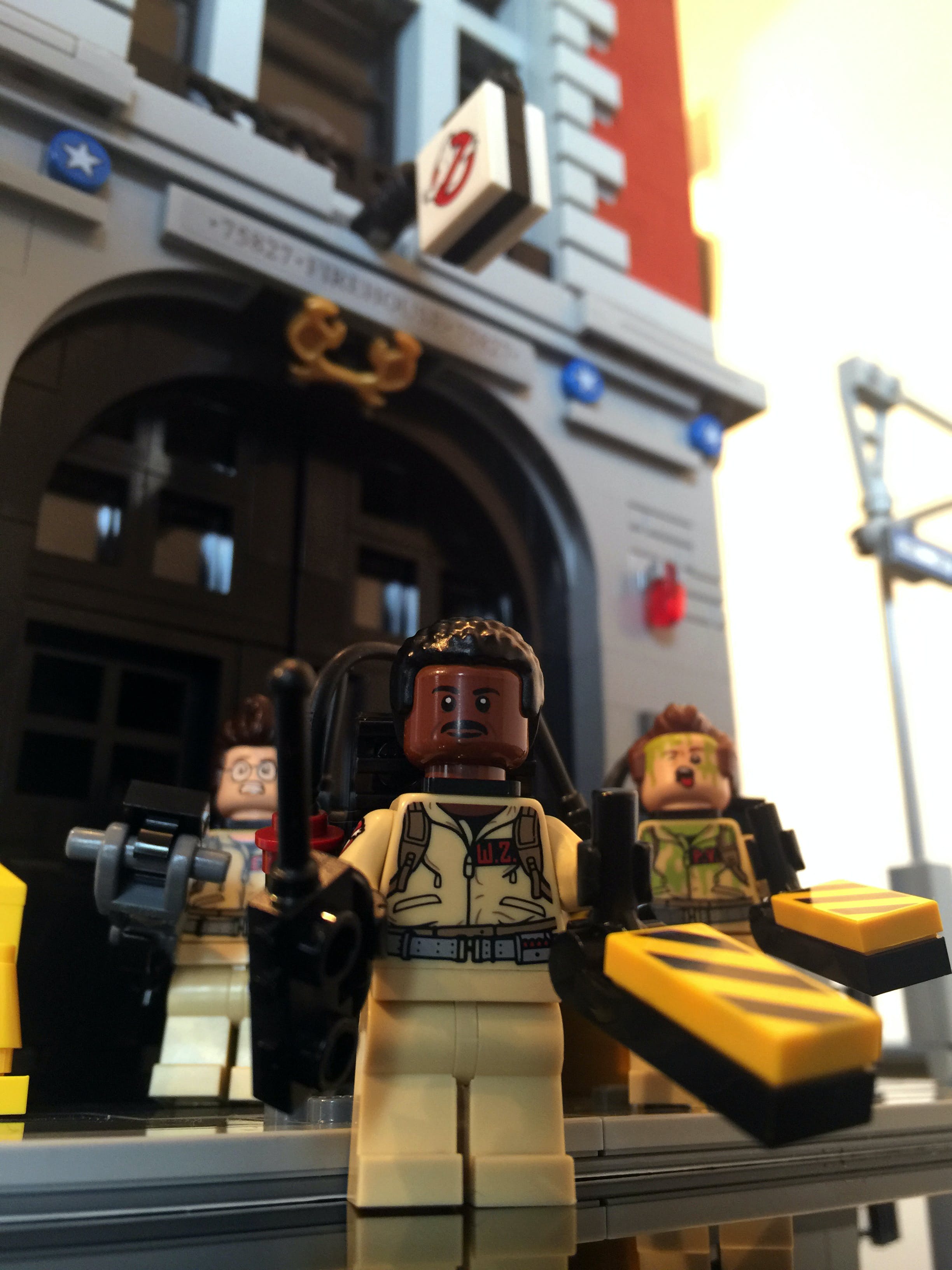 Ernie Hudson, the actor who portrayed Zeddemore, has said in the past that making the film was the most painful part of his career because the producers kept making decisions that didn’t involve him—like not including him in the poster or trailers. Getting his own Lego locker would have been a minor form of redemption, but it obviously wasn’t meant to be.

On the flip side, Lego’s designers did sneak in a small tribute to the deceased Ramis in the form of a tiny brick that hangs behind Janine’s desk that reads “RIP HR.”

Fans will have to take comfort in the other accuracies, like the containment system switch at the back of the first floor. It’s an ominous red box with red and green lights hanging over it. If you’ve seen the film, you’ll know that pulling it down releases all of the ghosts stored on-site. 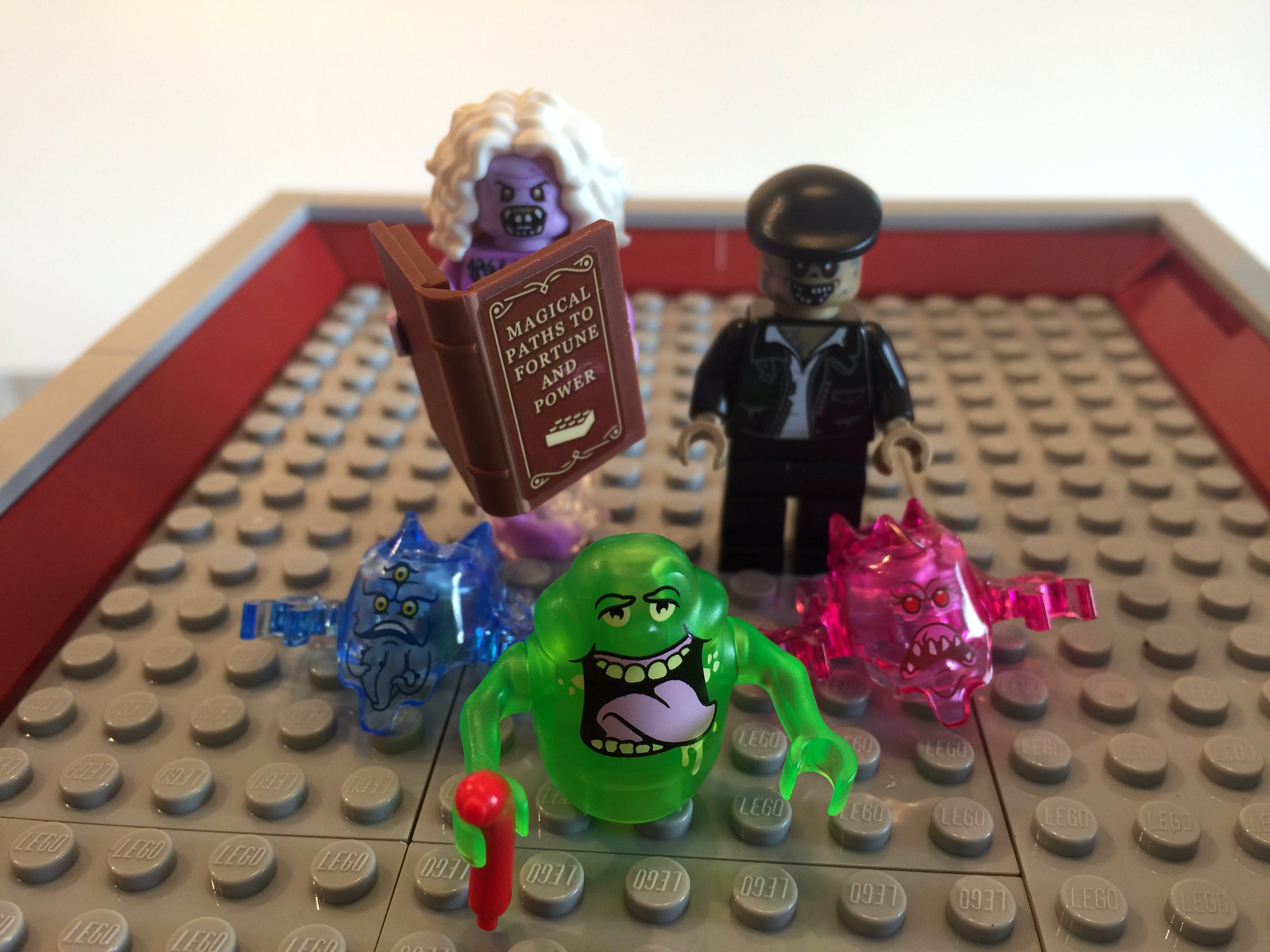 No Ghostbusters set would be complete without ghosts. The Firehouse includes two translucent ghosts—one pink and the other blue—that attach to clear poles that can be hooked onto various parts of the building. There’s also the zombie taxi driver, but no taxi unfortunately, as well as the ghoulish librarian, who reads from a book titled Magical Paths to Fortune and Power.

And of course, there’s Slimer. In a nice touch, the Peter Venkman mini-figure has a reversible face—one normal, and one that’s been “slimed.”

The second floor houses the crew’s living quarters, with a bedroom—again, only three beds—and dining area, complete with kitchen, fireplace and Stay Puft Marshmallow Man video game, for the crew to pass the time between jobs. There’s also a full bathroom, with shower, sink and ectoplasm-leaking toilet, which has to be a first for any Lego set.

The third floor has more R&R space, with a pool table and Egon’s lab. All of the floors are connected by stairwells and, of course, a fire pole. 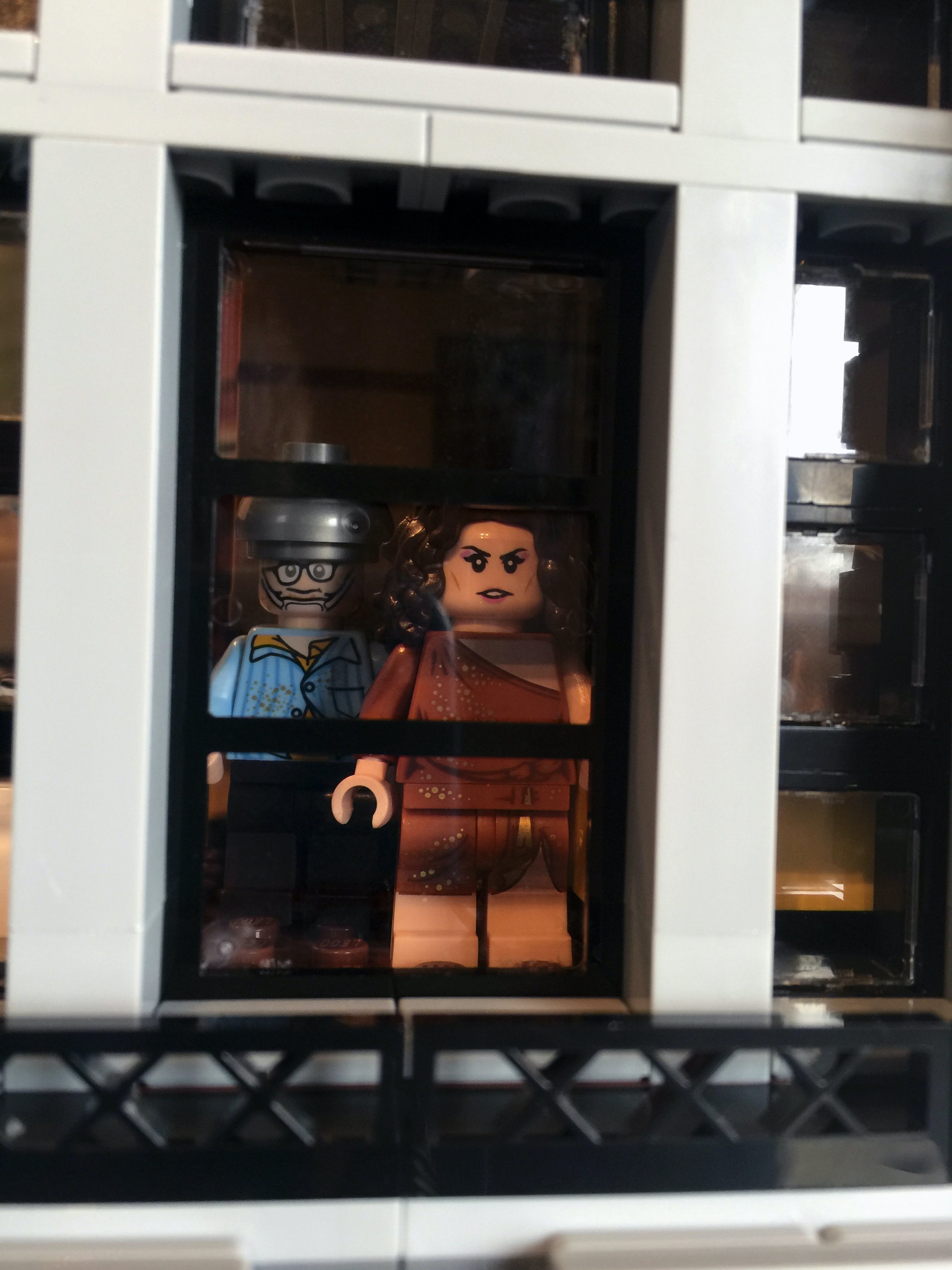 Rounding out the mini-figure assemblage are Louis Tully (Rick Moranis) and Dana Barrett (Sigourney Weaver). Tully can swap his regular hair for his supposedly protective colander hat, not that it’ll stop him from ultimately becoming the faithful servant of the almighty Zuul.

Fittingly for its size, the Firehouse is a challenging build that takes around 11 hours to complete. With more than 400 pages, the instruction book also requires close attention. It’s easy to miss steps on long-haul builds like this one, which inevitably requires back-tracking, so it’s best to take it slow and careful.

The end result, however, is an impressive Lego set that you’re going to want to show off. Just make sure you don’t turn off the containment system.