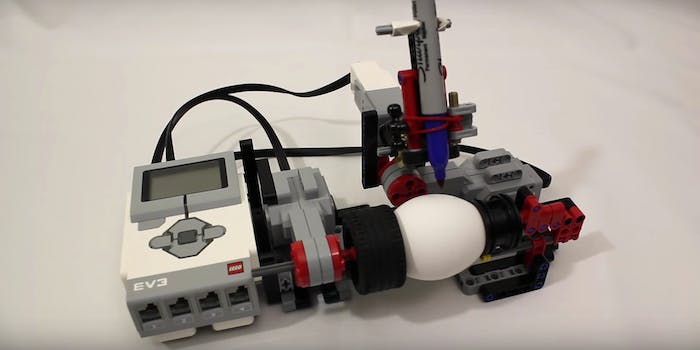 A great look with even less hassle.

Decorating Easter eggs isn’t always as fun as it sounds. The food dye often comes out too dark or light, the stickers hardly ever stay on, and your egg might crack before you’re ready to eat it. Luckily, a new contraption gives us a much easier way to make boiled eggs look beautiful.

It’s not the first time someone has created a robot to decorate Easter eggs, but JK Brickworks’s Jason Allemann—who has already hacked cookie decorating and 3D printing—created a machine-operated egg decorator that’s something to behold. Like his other creations, this one is made almost entirely out of Lego.

Allemann walks you through how to build the EV Egg Bot on his site, and from there it’s a matter of strapping in a felt tip marker and your egg and letting it go. Now you have one less thing to worry about on Sunday.