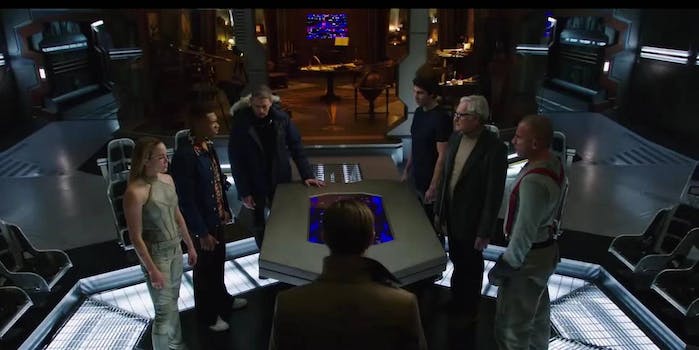 DC's zany time-traveling ensemble fest quickly slots into place alongside its other CW offerings, but not without its problems.

Thursday night’s much-anticipated premiere of Legends of Tomorrow didn’t really have to be good. As the CW’s latest spinoff of Arrow and The Flash, its two popular adaptations of the DC Universe, all it had to do was show up to be well-received by the franchise’s booming fanbase.

Instead, Legends dove headfirst into its plot with all the confidence and expediency that comes from having a storyline that’s been bolstered by two different concurrently running series. But there were several huge turn-offs out of the gate regarding the way this show deals with issues of consent. That might make Legends a hard sell for some viewers, despite its laid-back attitude.

Those first three minutes, though

The premiere ep opens in the year 2166 during London’s “Second Blitz.” The villainous Badguy Evildoer Vandal Savage has taken over the entire planet and promptly shows us that he is the most evil dude around by killing a woman and orphaning her poor, newly manpain-filled son. This happens less than a minute into the show. But then again, so does this:

Meanwhile, a group called the Time Council are doing that thing groups always do where they stand around in a big circle and scold the guy in the middle. The Middle Guy is Captain Big McLargeHuge Rip Hunter, who is arguing that Vandal Savage is worse than Hitler and it’s worth going back through time to try to stop him.

Naturally, the Imperial Senate hesitant to interfere, preferring to obey the Prime Directive. But since we all know the Prime Directive’s more like guidelines, and Captain Kirk (er) Sparrow Hunter never follows orders anyway, he walks away with a timeship and a mission to go back in time to stop Savage before he blows up the universe. (Did I mention Captain Hunter is Arthur Darvill, lately of Doctor Who? This could be considered casting so on point it jumps the shark, especially since we’re not even three minutes into this episode and so far it’s less time travel and more trope travel. But then again, flaming stormtroopers! On we go.)

Hunter sets his interstellar DeLorean—no, really, it looks a lot like a giant winged DeLorean—for January 2016. Hey. His AI, Gideon, describes the current moment as “the golden age of gasoline engines, online pornography, and those silly little smartphones.” Hunter dives through a wormhole, and we’re off.

Behold our heroes, whom we meet in order of Hunter kidnapping them.

Atom, who is literally a cross between Tony Stark and Ant-Man with Peter Gallagher eyebrows:

Firestorm, an amalgam of Victor Garber and a former football player, which is too confusing to explain properly here:

Katar Hol and Kendra Saunders, aka Hawkman and Hawkgirl, the recently reincarnated Nick and Nora of superhero-ing… if Nick had shown up to creepily stalk Nora and tell her they were destined to be together based on a millennium of previous soulmating, that is:

Finally, the group’s two resident antiheroes, Captain Cold and partner Heat Wave, who typically form part of the DC Universe’s criminal side. They have no particular personality other than to quip and shoot things.

To their credit, the group seems totally chill about Hunter Tasering them in the face and teleporting them away to a random rooftop. To his credit, Arthur Darvill is extremely good at dramatically reciting exposition while glowering meaningfully into space.

To no one’s credit, the gang, along with Arrow and Flash, failed to fully kill Savage in a recent crossover event between the two shows. So now Hunter needs them to help take down Savage before he can take over the world in the future.

Hunter tells them that in the future they’re all known as legends. Given that they would presumably have become legends by killing Savage, who is alive and well in the future, Hunter is clearly lying through his teeth about this.

The group—with the exception of the younger half of Firestorm, Jax—ultimately agree to go with Hunter. Firestorm’s older half, the nuclear physicist Martin Stein (Victor Garber), drugs Jax and drags him on board without his consent. Not cool, but, hey, there’s world-saving to be done, right?

From there, it’s a quick trip to the 1970s to find another professor, Aldus Boardman. Boardman freaks out when he sees the Hawk duo. He tells Kendra and Katar that several centuries before, they’d been embroiled in a nasty love triangle thanks to Savage’s love for a previous reincarnation of Hawkgirl. In quick succession, both Katar and Boardman whip out the old “we know this plot makes sense because Time Travelers told us it makes sense” logic. Boardman tells the Hawk duo that he knows the secret of Savage’s survival because they told him already—or rather, their previous lives did. Savage has survived through the centuries by killing their recurring incarnations, which are tied to his soul through an accidental brush with radioactive meteorites. (If you have no idea what this means, it’s probably OK. Comics!)

The trouble with Kendra

Meanwhile, Kendra’s agency is challenged from all sides as both Katar and Boardman insist that she’s really in love with Katar. The logic is that she has to be in love with him because Hawkman and Hawkgirl have been in love for millennia; she just doesn’t know it yet. So now Kendra, who was just a normal barista with a boyfriend of her own a few weeks ago, has not one but two dudes who’ve shown up out of the blue claiming a previous (read: centuries old) stake in her romantic affections.

Kendra is clearly super-uncomfortable with all of this.

Then Boardman drops the bombshell on her that Kendra was his mother in yet another previous life, which is yet another emotional tie Kendra doesn’t know how to deal with. Oh, and by the way, Boardman is supposed to mysteriously drop dead tomorrow, which clearly will have nothing whatsoever to do with the innocent coincidence of a bunch of time-hopping people with guns showing up in his office today.

The weird gets weirder

From there, the plot quickly embraces its sense of the ridiculous, complete with a sublimely ludicrous sequence where Vandal Savage’s head has been awkwardly photoshopped into famous historical events, like so: 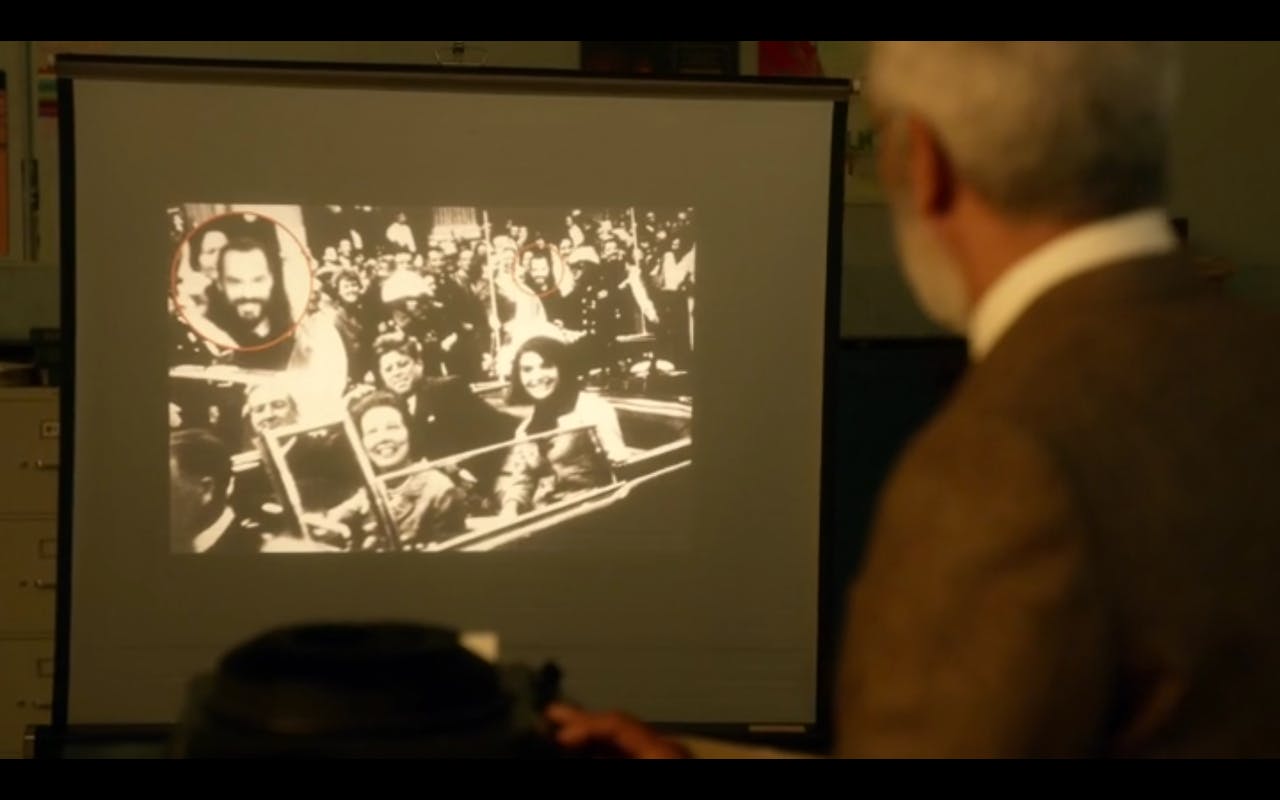 Yes, that is Vandal Savage’s head hilariously hovering over JFK’s car. (Does any of this make sense? Does it matter? FLAMING STORMTROOPERS!)

A sadly non-flaming stormtrooper named Chronos—technically a “temporal bounty hunter,” which could explain why he has a Boba Fett cape—shows up to kill people for no reason and attack Hunter’s time-travel ship. The others have left Jax behind on board, because the obvious thing to do after you’ve drugged and kidnapped a guy and transported him across four decades on a mission of violence without his permission. A fight breaks out to keep Chronos from capturing the ship, and inevitably someone shows up with a muscle car (it’s the ’70s, after all) and actual Boba Fett jokes. The show blatantly riffs on every pop culture property within grabbing distance, but it embraces it, and we all move on, accepting that it’s just that kind of show.

Hunter pilots them to an amazing place called Time Limbo, Boardman is critically injured, and Kendra is suddenly maternal. Things don’t get better when they find out that the Time Council has sent Chronos to track Hunter after he “commandeered” the Black Pearl timeship.

Then comes the shocker: Hunter chose the “legends” because out of all the superheroes in the galaxy, they’re the ones who are currently doing the least with their lives and so would have the least effect on the future. Sweet, sign me up for loser underachieving superheroes all day, everyday. Of course, we already know that Hawkgirl and Hawkman have a huge direct influence on the future timeline since it’s their fault Savage is alive down the road, so that doesn’t make sense either, but if you’re still keeping track of plot at this stage, you’re missing the point.

Last twist: Remember that orphaned son from minute zero? Hunter, as it turns out, was his father, which means that he’s doing all this for revenge against Savage. The wings of manpain have carried us backwards in time 190 years.

But since we can never have too many men whose thwarted emotional lives take up our attention, Kendra is starting to remember both her “son” Boardman and her feelings for Katar. Katar just straight up calls her by the wrong name, Shiera (the name of the original Hawkgirl incarnation), then offers the world’s most half-assed and insincere apology. “Oh, sorry, Kendra.” (Katar is a giant, unmitigated asshole.)

Kendra, however, is totally cool with it. She tells him calling her Shiera is fine. Is it possible to be Stockholm Syndromed into accepting a completely different personality? But we’re not done yet.

Next, Stein tells Jax he’s sorry that he drugged him and dragged his unconscious body on board in order to get him there. “I shouldn’t have done that,” he says—before undoing all good will by saying his pursuit of knowledge and “grand adventure” was more important than Jax’s right to consent because he’s an old man who could die at any time. First of all, Garber’s character seems to be around 50 or 60 so this logic is absurd; secondly, what in the actual fuck.

Both of these narratives are creepy and gross for the same reason: In each one, one character is placing a hell of a lot of pressure on the other to give in and see things their way, regardless of that character’s autonomy over their own mind and body.

Even worse, in both cases, a white man is pressuring a black character to accept his reading of the situation and defer to his judgment. Too often in stories, characters of color are denied agency and autonomy, instead of being allowed to own their own decisions and be in charge of their own bodies. Initially, it seemed as if the show might be ready to tug on this thread until it unravels and we see the consequences of Katar and Stein refusing to respect their partners’ judgment about themselves. Instead, Kendra and Jax both wind up relenting. Jax even throws in a speech about how being part of the team makes him feel safe. Getting drugged and kidnapped made him feel safe!

The way these issues are depicted onscreen affects the way we think about them in real life. Plenty of viewers will agree that Stein and Katar are both justified by the circumstances to pressure their partners into getting their way. But in reality, that kind of thinking leads to people getting hurt and having their trust broken. It perpetuates rape culture.

Legends of Tomorrow is a show whose overall tone is lighthearted, but leaving this issue unaddressed in one of its main plotlines weighs it down. However the show succeeds from here may largely depend on how it chooses to continue exploring these themes.

Like the “legends” themselves, it’s got plenty of potential, but ultimately it may leave us wishing its harmful and outdated depictions of consent had been jettisoned in the past, where they belong.