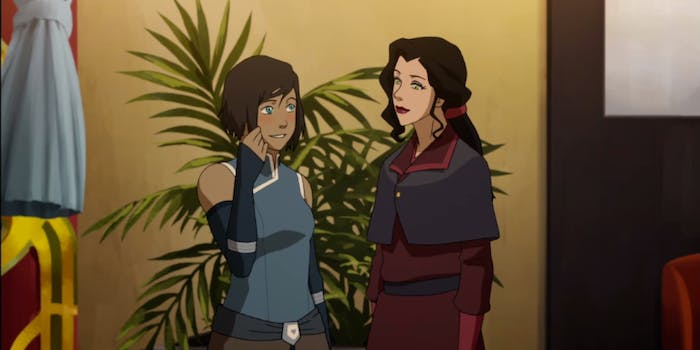 ‘Legend of Korra’ will live on as a Dark Horse comic

And they're not shying away from the romance, either.

Dark Horse Comics announced at San Diego Comic-Con Friday it will be launching a new Legend of Korra series written by the show’s creators.

Bryan Konietzko and Michael Dante DiMartino will collaborate on the series and Korra’s story, which ended last December after four seasons. It’s not the first time the world that began as Avatar: The Last Airbender has been portrayed in comic form, with a series of comics from Gene Yang bridging the story between Avatar and Korra, but it’s the first one Konietzko and DiMartino will personally write.

The show last left us with Korra and Asami holding hands heading on an adventure in the Spirit World with the creators all but confirming Korrasami within Nickelodeon’s restraints (which they later did explicitly in Tumblr posts). Dark Horse released the comic’s first cover in GIF form, featuring Korra and Asami walking out of the Spirit World with their arms around each other.

“We’re definitely going to focus on Korra and Asami’s relationship,” DiMartino said at the panel to the applause of the crowd.

There’s no release date yet, but fans will have plenty of time to speculate what happened in the Spirit World, as they’ve already done for months.